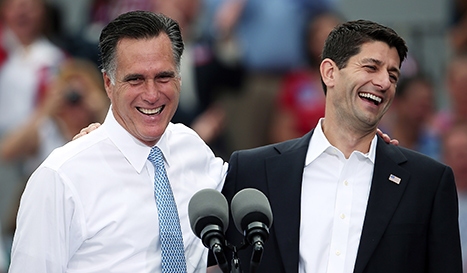 Miami, September 5 — Gazing at each other with the fondness that observers report has been waxing ever since the two men first met several months ago at a policy forum, GOP Presidential candidate Mitt Romney and Vice Presidential candidate Paul Ryan, made it official today. They are deeply in love and plan on getting married in Romney’s home state of Massachusetts, where gay marriage is legal, early on the morning of Inauguration Day, whatever the outcome of this fall’s presidential election.

Coming out before a large campaign crowd in Florida that had been raucous up to the moment of the announcement and then turned eerily silent, Romney grinned uncomfortably following the revelation while Ryan, standing slightly behind the Presidential candidate, pumped his fist vigorously up and down. The gesture is one that he has used frequently during speeches and rallies but on this occasion its use brought expressions of disquiet from the gathering of GOP supporters.

Both men denied they are homosexuals or that either of them has ever engaged in homosexual activity in the past. During the Q&A following the candidate’s speeches Romney explained the unexpected turn of events by saying, “I guess the right guy just never asked me before.” As Romney made this admission, Ryan once again pumped his fist up and down while Romney squirmed visibly, a nervous but pleased expression on his face.

When it was Ryan’s turn to speak, he slipped a new epithet into the terms he regularly uses to describe President Obama. “Not only is he a socialist, Nazi, Muslim, collectivist champion of society’s parasites,” said Ryan, who denies his earlier claim that the novelist Ayn Rand inspired him to enter politics. “Barack Obama’s a breeder, too!”

“Unlike the Big Government-Knows-Best Democrat Party, we Republicans believe in freedom,” said Ryan. “We believe everybody has the right to do what they want in the privacy of their own bedrooms and that personal issues are personal issues. We believe in responsibility and the right to make your own choices in life.” Ryan went on to describe his relationship with Romney as a “perfectly normal April/October bromance. Get over it!”

If elected, Romney and Ryan said they plan to build a log cabin for themselves at the Presidential retreat at Camp David. “It’ll be a small one at first,” Ryan said, “hardly big enough for two big guys, but over time we’re hoping it will grow and grow and be able to accommodate a lot of other straight guys like us who just happen to end up marrying some other guy.”

Speaking to reporters after the campaign rally, Romney and Ryan revealed their pet names for each other. Romney’s nickname for Ryan is “Boy Scout.” Ryan’s nickname for Romney is “Big Stiff.”

The couple also said they have opened gift registries at BMW.com, REI International, and Tiffany’s. “This just goes to show that the Republican Party is a a big tent made up of people with a wide range of interests and lifestyle preferences,” Romney said, commenting on the gift registries.

Reporters caught up with Romney’s wife Ann and Ryan’s wife Janna at La Chica’s, a popular Cuban eatery in Miami’s South Beach where the two women were dining on an El Jefe sampler and consuming a second pitcher of Piña Coladas. Neither was willing to comment directly on the unexpected development.

“We’re feeling no pain here,” Ann Romney said, raising her glass to her dinner companion. “What about you, Janna? You feeling any pain?” In response, Janna Ryan said nothing, merely smiling and shaking her head as she clinked glasses with Romney.