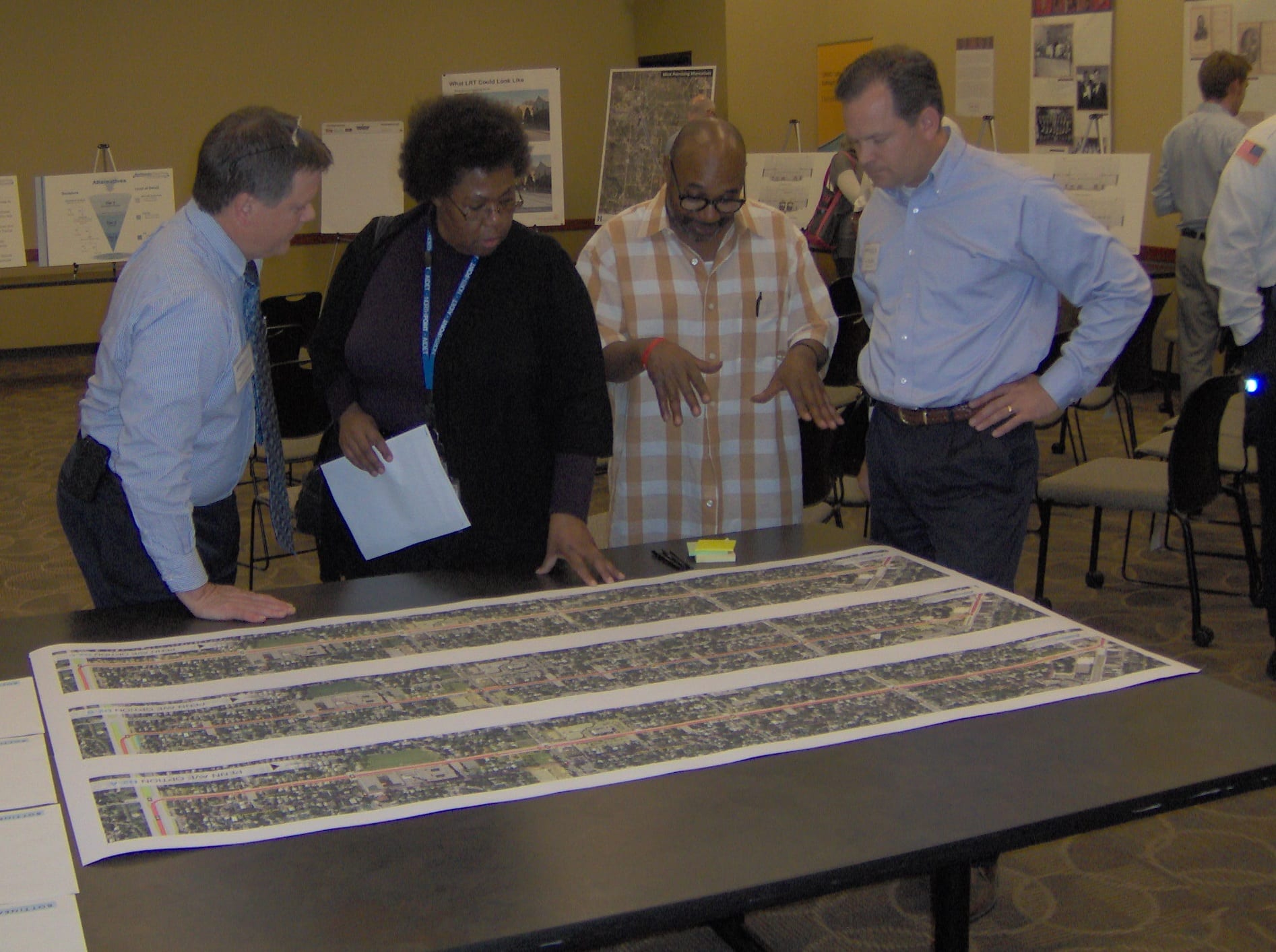 The Bottineau Transitway may have a rocky road ahead, judging by the reactions of about 75 people who attended an October 6 open house in North Minneapolis. Almost everyone in the audience was clearly upset by what they were being told, and many found the speakers confusing. The open house, held at the Urban Research Outreach Center, featured planners and consultants from the Hennepin County Regional Railroad Authority presenting three alternative routes for the Bottineau Transitway light rail transit (LRT) line. The line is planned to run from downtown Minneapolis to northwest suburbs.

The meeting was to gather input from residents so that planners could decide which D2 route best served the community. They would then decide between that D2 route or the D1 alternative to use in going forward planning the LRT line.

Before the speakers began, Joe Gladke, the Hennepin County Manager for Engineering and Transit Planning, described the different routes to me.

Paul Danielson, a consultant with SRF Consulting, spoke at the meeting and said, “We believe that there are positive benefits for having transit in the neighborhood.” He also described the negative impacts. All three D2 alternatives would require the full or partial acquisitions of dozens of properties along Penn and/or Oliver, meaning people would have to move from their homes or would lose parts of their properties, such as their front lawn. The planners said that if a home was taken, homeowners would receive compensation to cover the full cost of purchasing a comparable home in the same neighborhood and to cover moving expenses. All three alternatives would also cut off some cross streets, increase noise levels, and two would prevent some people from accessing the front of their homes from a vehicle. Danielson said that none of the alternatives would prevent emergency vehicle access to any property.

Comments from the audience during the question and answer session following the speakers were overwhelmingly negative. One person said, “This will decimate the community as we know it today.” Referring to the tornado that hit North Minneapolis in May, a woman said, “I feel like it’s hitting me again.” Many more expressed concern that the D2 routes would force people to move and concern about people getting compensation for their homes. Others said that they were worried about the LRT cutting off vehicular access to the front of their homes.

The level of anger expressed during the meeting seemed to arise in part because the meeting’s purpose was unclear. At first, many in the audience seemed to think that the D2 alternatives were the only options and that one of those would be built. After some heated comments, the presenters better explained the decision-making process. The planners were holding the meeting and putting out a survey to better understand how the community felt about the D2 options, but the D1 alternative of having the LRT go along a freight line was still on the table. After that became clear, a woman said, “Please go back and tell the government that we don’t want [the D2] options.”

After the meeting, audience members said that they were dissatisfied with the meeting and how the community was being involved in the project. Northside resident Spencer Sanborn said that “It’s too important of a decision to make in one meeting.” Erica Shatz, another resident, said “I think that it’s too short given the weightiness of the issues.” She added, “We should be able to talk with each other as well as the presenters.”

The presenters could not say exactly when they would decide which D2 option best served the community or when they would decide between the final D2 alternative and D1. People can share their views on the D2 options with the planners through an online survey. Ray Dehn of the Northside Transportation Network said that group will also be having a meeting on November 3 to seek community input about the D2 alternatives and “narrow it down to the best option for the Northside.”