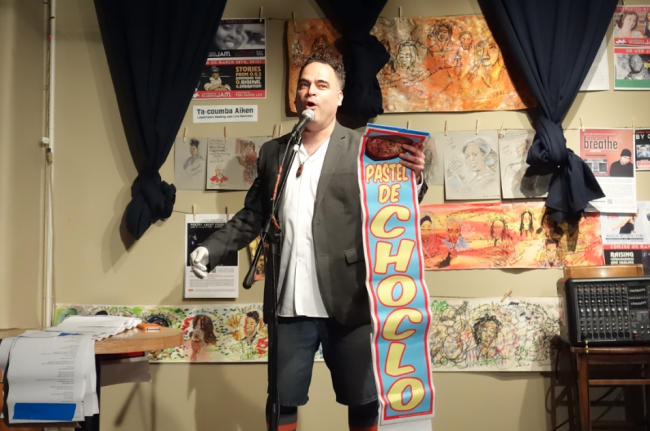 The titillating title of the latest Lowertown Reading Jam (April 23) went for high stimulation–sex, food, and the simmering anger behind microaggressions. Robert Farid Karimi, a local poet and performer known as “the People’s Cook,” composed the evening and even brought food to the menu at Black Dog Cafe (a dash of za’atar to olive oil for bread) and set a bottle of “very hot salsa” on each table. He passed out latex gloves encouraging everyone to “Be safe!” before embarking on an evening of risky poetry. 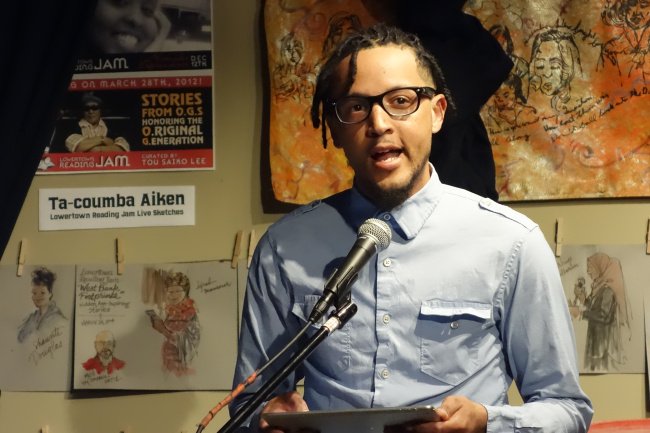 The first in the short roster of performers was Chaun Webster, poet, founder of Free Poet’s Press and co-proprietor of the soon to open Ancestry Books. He took the stage and read a single, long piece he described as a combination of haiku, journal and stories. It was embroidered with scenes and sentiments along a timeline that moved back and forth in a fashion that was both disoreinting and mesmerising. One episode stood out movingly. It described a father’s trip to the grocery store to buy an orange with his young son and how they were stopped, searched and left feeling robbed of the simple magic of the day. 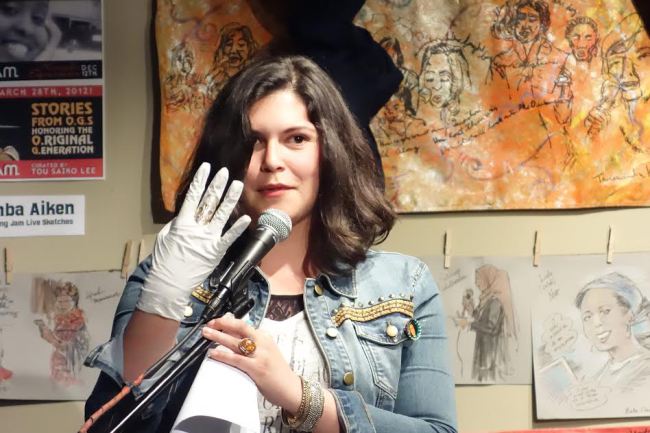 Jessica Lopez Lyman, a performance poet and graduate student in Chicana and Chicano Studies, pulled her ring over her latex gloved finger and read three new pieces. In the first one she noted that there is nothing sexier than books and in “Three ways to make me fall in love with you” she describes the seduction of having someone buy her a book, read her a book and write her a book.

Lyman addressed microaggressions in her poetic response to “the white university student who asked me to be her Hispanic model for workers in a meat packing industry” and her final poem: Survival Guide for a Chicana Waitress Working at a Mexican Restaurant Owned by White People, where she finds herself uncomfortably translating between the two worlds of “front and back of the house.” 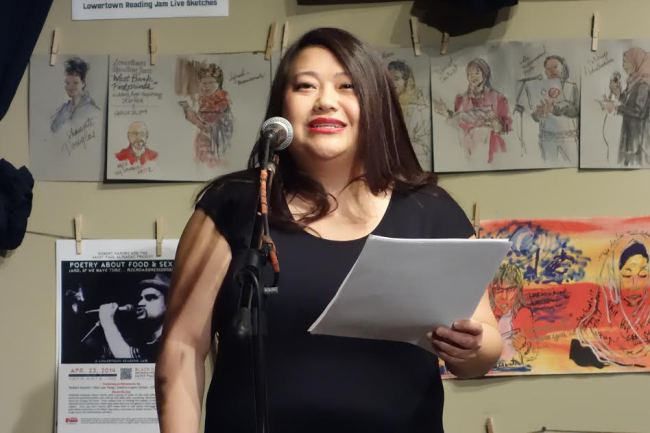 Playwright, poet and performer May Lee-Yang opened with The Things A Hmong Woman Loves which included garden vegetables, chili peppers and a chest freezer for saving the short growing season’s bounty along with special cuts of meat, each with its own story.

The work titled Skin Hunger, a collage of comments she found in researching the topic of touch deprivation, stood out for sidestepping the highly flavored topic of sex and food. It examined something essential: craving human touch. On the other end of the spectrum was Ten reasons Why I’d Be a Bad Porn Star: # 5, an excerpt from her Fringe Festival script. The last poem Lao Papaya Salad was written especially for the Lowertown reading. It met Lee-Yang’s self-imposed challenge not to use swear words opting instead for flavorful descriptions that made swear words seem bland. Lao Papaya Salad she cautioned “is not for the casual foodie.” 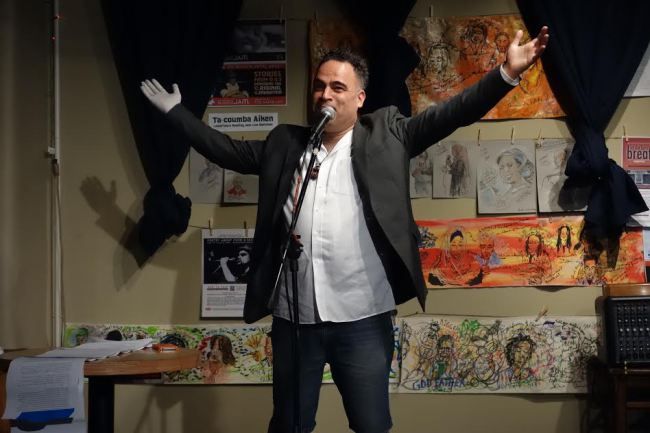 Robert Karimi took the stage as the final reader, bristling with comic energy and the sly smile of someone who serves up humor while feeding you serious commentary. He read poems such as Why the side of me that eats when not hungry is a member of the tea party and his Burger King Suite that included poems about cucarachas, sex in the BK freezer and Lazy Days, Sex and Uniforms. Read more about Robert Karimi at KaoticGood.com. 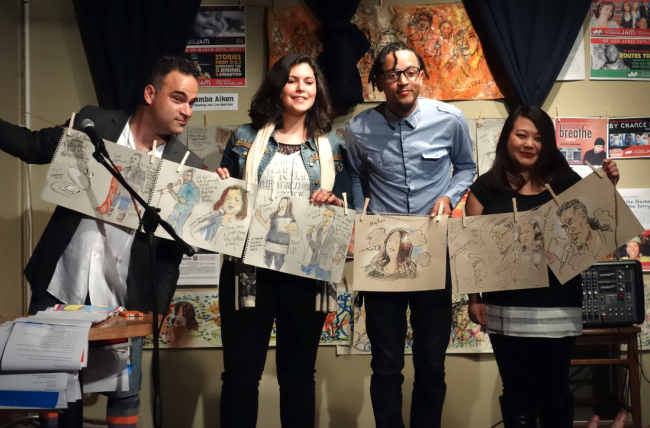 The poets take a bow at the end of the show with illustrations sketched live during the reading by artists Roberta and Ken Avidor.

The Lowertown Reading Jams celebrate the rich literary history of Minnesota’s capital city and are sponsored by the Saint Paul Almanac (full disclosure: I work for this organization). Read more about the 2014 season on the Saint Paul Almanac website. Events take place at the Black Dog Café, 308 Prince Street, 7:30-8:30 p.m., each with a featured curator. All ages are welcome, and there is no cover charge. The series is filmed by SPNN. Browse video here.