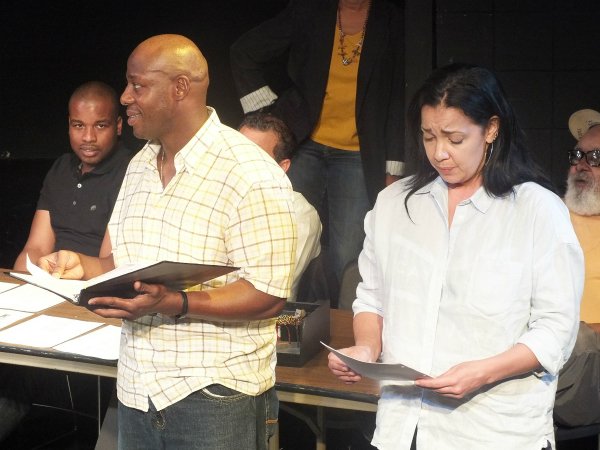 Number 2 and his long suffering wife

The road weeps, the well runs dry, a tale of spirituality, slavery, and relationships, filled with powerful scenes examining identity and other issues relevant to our lives today, is coming this fall to Pillsbury House Theatre. Minneapolis is one of four U.S. venues for this historical fiction drama by poet and playwright Marcus Gardley.

This play—opening September 27—is the second part of a trilogy by Gardley, who was awarded the PEN/Laura Pels award in 2011 as a Mid-Career Playwright; Gardley is a visiting lecturer in playwriting at Brown University. At a Pillsbury House preview event on August 23, Gardley said, “I feel like this play found me. It is a mixture of Seminole stories, Biblical values, and family interactions.”

The people of the story, represented by 11 cast members, are the survivors of slavery and revolts who came and settled in Wewoka, the first all-black town in Oklahoma. The community comprised freemen—the term used in the historical setting for black Native Americans, who in this second segment of the story find their beliefs and relationships with each other put to the test when new and old religions collide head-to-head. The time frame for this segment is just after the American Civil War.

During the preview and discussion, there were three scenes presented, and they were at times both intense and humorous. In one scene, the good Reverend and his wife come over for dinner at another character’s house; after a few minutes of conflict, the Reverend breaks into a speech that had the house nearly rolling in the aisles with laughter. The director for this production is Marion McClinton, a St. Paul native. He is the recipient of numerous awards and honors nationally, highly regarded for his interpretations of the playwright August Wilson.

Pared down to the core, this play is about a community of the faithful who find their identity tested when their wells run dry.

Also read James Williams on Marion McClinton and the history of the Twin Cities theater scene.

The audience eagerly awaits the preview

A humorous moment in the scene