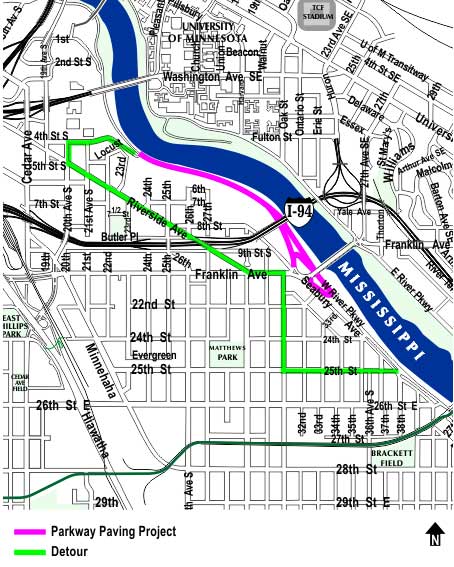 West River Parkway and 31st Avenue are scheduled to be repaved this spring and summer. Details below.

Expect increasing traffic in the coming weeks on 25th Street and Riverside Avenue, the streets that will be part of the detour during the West River Parkway repaving project.

The paving project is scheduled to begin April 29th and will extend from Franklin Avenue to 4th Street South. The project will also include repaving the ramps, some curb replacement, manhole structure lowering, and removal of concrete crosswalks.

It is an extensive project that planned to take five weeks. The existing pavement will be entirely removed and replaced.

According to Council member Cam Gordon, the bike path and pedestrian walkways will not be closed. However, there will be no parking on West River Parkway during the project. 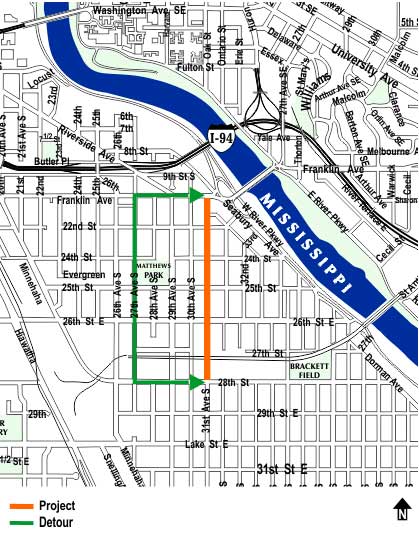 31st Avenue between Franklin Ave and 28th Street E will also be repaved this summer. This is resurfacing project so it won’t be as extensive as the work being done on West River Parkway. It is expected to only take a couple of weeks.

Resurfacing involves grinding off a layer of asphalt and replacing it with a new layer. According to the city, resurfacing streets extends their life by ten years and prevents a more costly rebuild.

No parking will be allowed on the street while construction is underway.

There are two public hearings scheduled for the 31st Ave S project, for nearby residents to learn more about the project and what the assessment costs will be:

Learn more about other road construction projects that are scheduled for our community, and learn how resurfacing works in our previous post on street resurfacing.

Get the latest updates on road work and street closures in our weekly Sunday post, Your Week Ahead.