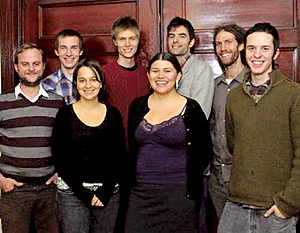 Luce Guillen-Givens, Monica Bicking, and Erin Trimmer can breathe a little easier after the Ramsey County Attorney dismissed charges brought against them as part of the RNC 8 prosecution. A fourth defendant, Erik Oseland, pleaded guilty to a misdemeanor — consisting of talking about knocking over newspaper boxes — as part of a plea bargain on August 27. The remaining four defendants (Rob Czernik, Garret Fitzgerald, Max Specktor, Nathanael Secor) are scheduled to go to trial on October 25.

According to an email from defense attorney Bruce Nestor, “The State has mailed plea offers to the remaining four defendants as it seeks to settle the case prior to the scheduled trial date of October 25, 2010.” Nestor says he heard about the dismissals via a copy of an email to the court indicating that charges against the three would be “in the interest of justice.”

Nestor noted that Ramsey County Attorney Susan Gaertner’s office said the dismissal came because the trials would be costly and time-consuming.

“I don’t think that Susan Gaertner should be allowed to hide behind this kind of justification,” said Nestor. “For two years she and Bob Fletcher have claimed that the RNC Welcoming Committee was a criminal enterprise. It is absolutely shameful to charge them with conspiracy and terrorism charges and then dismiss those charges two years later because the trials are going to be time consuming. They [Gaertner and Fletcher] should stand up and say they were wrong.”

The RNC 8 were arrested before the 2008 Republican National Convention began, and did not participate in any of the demonstrations or other actions during the convention. The prosecution is based entirely on the theory of conspiracy to commit crimes. That’s the basis of the third-degree conspiracy plea by Oseland, whose testimony at the time of his guilty plea was about talking about knocking over newspaper boxes.

Luce Guillen-Givens said, “I’m relieved personally that the risk for me has been taken out of the situation, but all this really does is demonstrate what we said all along that this is a politically motivated case and an abusive prosecution and we are committed to keep on fighting for the other four.”

Guillen-Givens also extended an invitation: “We have a dinner coming up on September 28 at Walker Church at 6:30 p.m. – it’s a free community meal, which we do every month, and everybody is invited to come.”

Full disclosure: In the past, Luce Guillen-Givens has done clerical work as an independent contractor for the Twin Cities Media Alliance, the nonprofit organization that publishes the Twin Cities Daily Planet.