Plea deals with the final four defendants are tentatively schedule for October 19, ending the RNC 8 case, which has dragged on for more than two years after the end of the Republican National Convention. According to a press  release Friday afternoon by the Friends of the RNC 8, Rob Czernik, Garret Fitzgerald, Nathaneal Secor, and Max Specktor “tentatively reached a plea agreement with prosecutors, likely avoiding trial. The agreement, if it goes according to plan, significantly reduces the charge, calls for favorable sentencing, and is non-cooperating.”

Charges were dismissed against Monica Bicking, Erin Trimmer and Luce Guillen-Givens on September 16. Erik Oseland pleaded guilty to guilty to conspiracy to commit damage to property in the 3rd degree, a gross misdemeanor on August 27, in a deal that required him to serve a 91-day sentence in the Ramsey County Workhouse beginning on October 20.

A spokesperson at the Ramsey County Attorney’s office, reached late on Friday afternoon, said, “What I can tell you is that there have been discussions amongst the attorneys in the case. The only other thing I can say is that there is a hearing on Tuesday.”

The RNC 8 were originally charged with conspiracy to commit riot in the second degree and conspiracy to commit criminal damage to property in the first degree.  The two conspiracy charges were later enhanced with a terrorism charge under the 2002 Minnesota version of the Federal Patriot Act, but last spring Ramsey County Attorney Susan Gaertner dropped the terrorism enhancement. 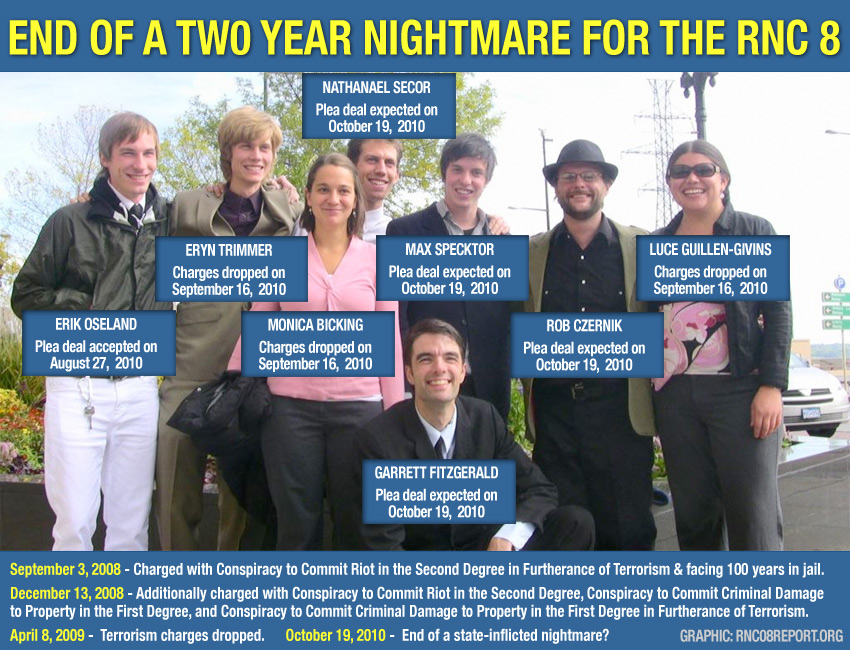 The defendants and lawyers for the RNC 8 all have no comment until after Tuesday’s hearing, but the feeling is one of frustration at the system.  Indeed, one press statement from the RNC 8 Defense Committee speaks of “strong and mixed emotions” and states:

We understand this news may well be surprising.  Many of us feel the same and much, much more, but above all, we personally support all the defendants in their difficult decision and will continue to support them through whatever hurdles remain.

Jude Ortiz, a member of the RNC 8 Defense Committee, said in an interview that “the reality of situation is that the courts are extremely coercive” and “have nothing to do with finding justice.”  According to Ortiz, the court system is about “creating situations into which people are overwhelmed by the entire process and can’t possibly access all of their rights.”   The defendants ultimately were forced to take plea agreements, according to Ortiz.  “Activists are not immune to the processes that burden individuals and the pressures that courts put on people.”

The hearing where Fitzgerald, Specktor, Secor and Czernik will likely accept the plea agreements, which Ortiz said he expects to be “favorable to the defendants” is scheduled to take place Tuesday, October 19 at 9 a.m. at Ramsey County Courthouse (15 W. Kellogg Blvd., St. Paul).