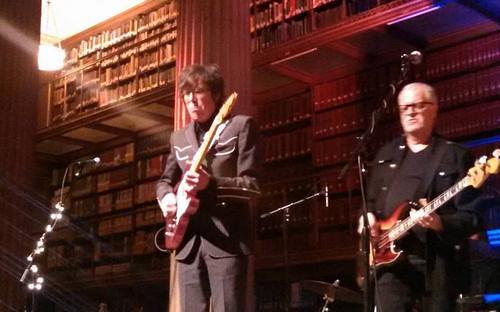 Who doesn’t want to celebrate Christmas in the most majestic, rockingest library in town? That’s what we did Thursday night at the James J Hill. Everyone was so friendly and warm (that may have been the free samples of Two Gingers whiskey floating around) but it felt as much like a party as a show even though we aren’t musicians and this event was clearly a night of musicians for musicians.

Headlining the show was Kenny Vaughan, who is Nashville cool – dressed and done up in a way that doesn’t sadly doesn’t happen in the Midwest that often. He’s the sort of guy you listen to and think he’s like another band and then realize that actually they’re probably like him.

He started with an old school rock and roll instrumental—so old school that it could just as easily pass for country. The whole set was a retrospect of music genres from 1950 to present. There was a little surf, a little country, some 70s rock even a little ’90s thrown in. Vaughan plays with Dave Roe Rorick – who played with Johnny Cash for years. You could hear the influence in the more country tunes. The drummer was a newer addition (Peter Abbott) but an accomplished musician as well.

The easy grace with which they play is fun to watch. To two legends playing so fast without breaking a sweat is inspiring! And to hear lyrics like “You don’t even own a suitcase cause you’re going nowhere fast” remind me of driving with my dad.

Gospel Machine brought the uplift of the holiday season with them. It was a little gospel, a little soul and a lot of hidden chords from some of my favorite ’80s bands. Their first song started like The Jam’s A Town Called Malice but morphed into something a little different but with just as much danceable beat. I swear I heard a few notes from a Bangle’s song too. The band looks like they’re on break from the Geek Squad—a great look. Lead singer Jayanthi Kyle was animated and lovely with formal black party dress and knee-high high tops. He voice is low and joyous even when singing a cautionary tale of men who are no good!

Poet Benjamin Percy read from his upcoming book The Dead Lands. We heard about the apocalyptic birth of a grub or beast of a girl with black lidless eye, devoid of white or iris. My 10 year old date found it terrifying. I found it mesmerizing—or maybe I found Percy’s voice mesmerizing. He allowed that his voice was even lower than usual due to a cold. It was perfect for his dark poetry—which ended without pause or key change with an ironic Merry Christmas.

The night was sandwiched with music from Erik Koskinen and the Real Phonic Band (Paul Bergen, Frankie Lee and JT Bates). It’s fun to see them play a new twist on their songs. I think we even had a brief duet with Koskinen and Bergen. And the night ended with everyone on stage singing Rudolph the Red Nose Reindeer. Very festive—and it will all happen again next month!