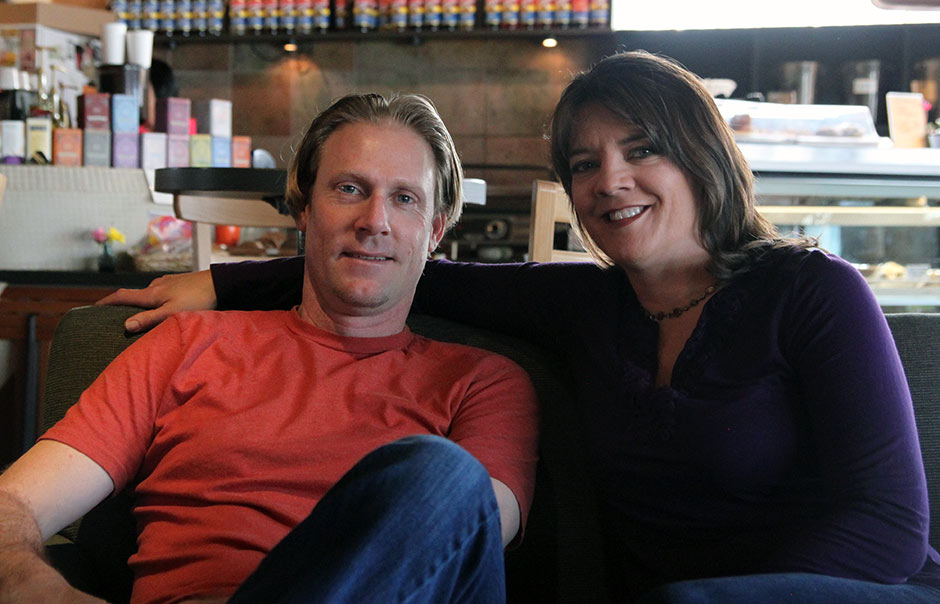 Fifteen years ago the Riverview Cafe brought Mara and David together, today they have a wealth of stories of living life at the heart of a community gathering spot.

Sitting down with Mara and David Bernick, owners of Riverview Cafe, I start out by asking, “What inspired you to open the shop?”

David jokingly adds, “So I could meet Mara. That’s it.”

And the story of the two of them and the cafe begins.

A Glimmer of a Coffee Shop

When David first saw the building that would become the Riverview Cafe it wasn’t love at first sight. “It was a nightmare. There was this big plywood thing saying, ‘For Rent,’ spray painted on.” Undaunted, he walked across the street to take a closer look. The owner had posted renderings of what the building could be. He looked to see the architect who had done the work – it turned out to be his brother-in-law. He called him up to get the scoop and find out if this was the place he had been looking for. It was. 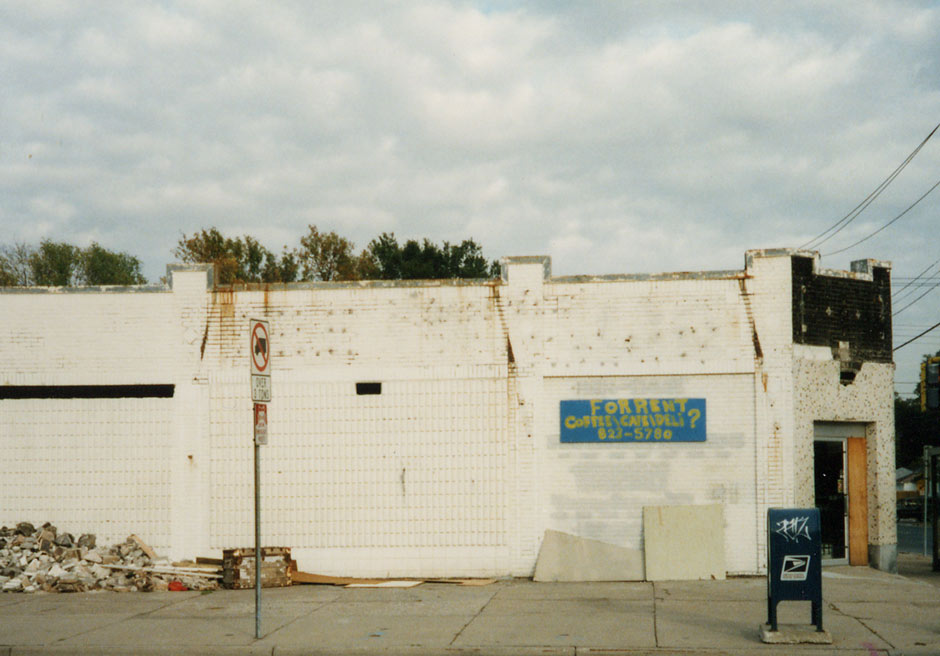 The Riverview Cafe before remodeling. The windows had been covered up so David had to remove all of the bricks. You can see a pile of bricks that had already been removed on the left side of the image.

Now he just needed to find out if the neighborhood actually needed a coffee shop. The census wasn’t much help – it was ten years old. So David sat in his truck for five hours at a time. “I had to know, I had to see what the neighborhood was like, that was my field work at the time,” says David. “During the day, I would see mom with stroller, dad with stroller. At night I would see people sit in their car, and three minutes before the movie started, 20 to 30 car doors would open and everyone would jump out of their cars and run to the movie theater…. They had nowhere to go…I thought, man, this is going to work.” 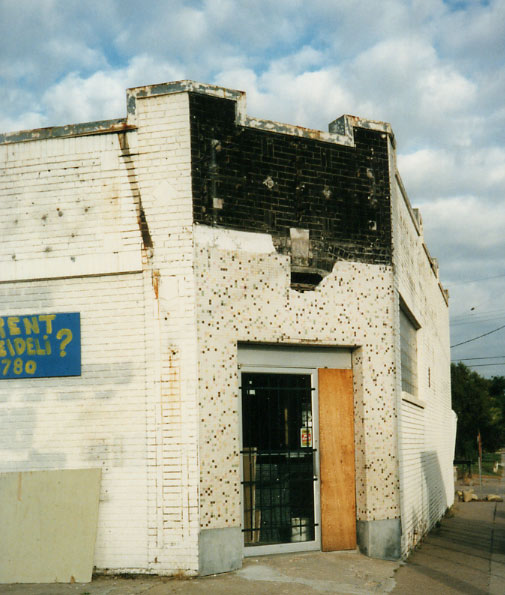 How many facades did this building have? You can see the original brick was covered up by tiny tiles.

A Building with a Rich History and Good Bones

After they agreed upon a lease, David and his brother-in-law got to work. They re-used a lot of the materials already in the building, keeping the original floors and reusing the wood shelves as trim. “That was partly due to budget, or lack of,” laughs David.

“Our goal was to try to create a business that felt like a community meeting spot. Kind of like a giant living room, where people would feel comfortable bringing their two-month-old child to their 90-year-old grandmother…like something that had morphed and always been here in the neighborhood.”

It made sense. The building has been a part of Longfellow since the turn of the twentieth century and it has seen a lot of different businesses. “This building has a rich history,” Mara notes. She tells of how going through the basement, David unearthed drawers of handwritten prescriptions and old medicine bottles from when it was a Crane’s Drug Store. “The building’s got good juju,” adds David. “It would have been a shame if someone would have come in and put in something modern, something Linden Hills-ish.” 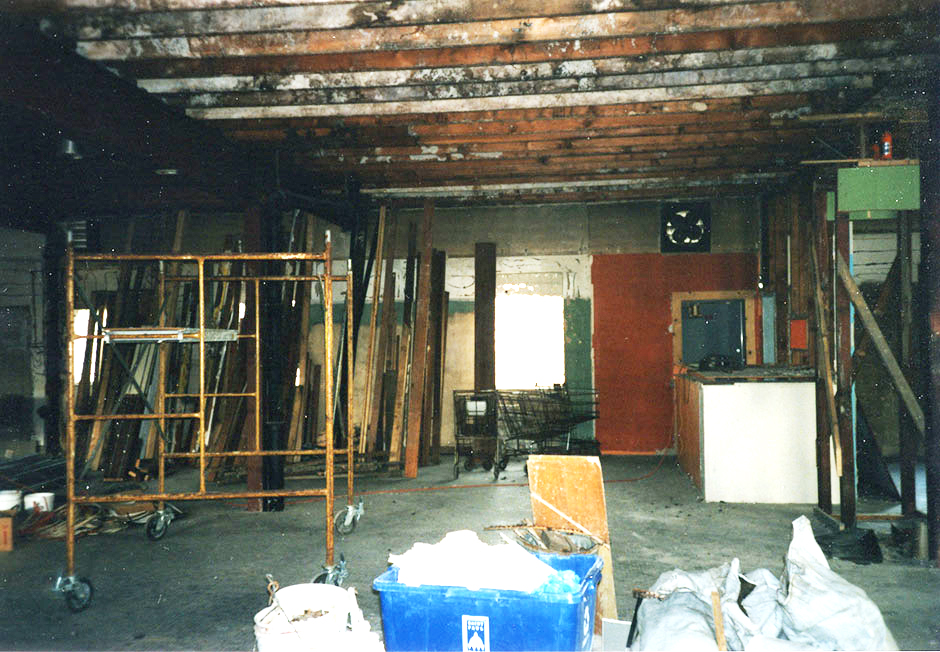 Granted, there was good raw material to work with, but David describes what the place was like in one word – “condemned.”

Ask any business owner to describe the days leading up to opening shop, and they’ll shake their heads thinking back to the mad rush of those final days. David has his story, too.

“I was full beard, haggard,” he said. “I had already hung big signs in the window that said ‘Open February 7th,’ so I couldn’t go back…. I’m down there [on the floor] on my hands and knees scraping, and I hadn’t slept in five days and all of the sudden this old man walks in and starts laughing at me. I had zero humor left at this point. I looked up and said, ‘What are you laughing at old man?’ And he goes, ‘I put this floor down.’ And I went, ‘Oh, my gosh, I have a few questions for you actually.’ He told me that when he laid the floor it was in the 1930s, it wasn’t even the original floor of the building. The building actually had hard wood floors when it was built…and then they came in and put a layer of concrete over and then they put the tile on top.”

They were both seeing other people at the time, and David tells how one day it just hit them. “It was just one of those ah-ha moments where you go, you know what? We would really work. We have a lot of similar interests, we have a lot of similar background, we communicate well, and all of those fun things. It was a shocking realization.”

“And in six months we were married,” adds Mara.

Getting to know the neighbors

That cafe that they wanted to create at the beginning, the one where kids and grandparents would feel comfortable? It happened. Older neighbors told Mara and David countless stories of the space. Mara tells of how one couple wrote about going out for a treat at the soda fountain before heading to the meat market located down the street.

The cafe’s playroom, with painted fish swimming on the walls and full of toys, have also brought a lot of young families into the cafe. “We’ve seen hundreds of people give birth to babies in this neighborhood,” says David shaking his head in amazement. “I mean hundreds of people come in pregnant and now those kids are in high school. Its crazy. These people have become part of our extended family.”

Once you’re in the family, you’re in. Mara and David rattle off all of the employees and how long they’ve worked at the Cafe, some have been there since opening day. “One thing as to why we’re successful is that we’ve had employees for 15 years,” says Mara. “It has a lot to say about who our employees are. David and I believe that you treat people how you’d want to be treated.” Two employees who’ve worked at the Cafe since the doors opened have since gotten married and have a baby. Their mother works at the cafe, too.

“We don’t treat our employees like employees, we treat them like family,” says David. “I mean, they don’t work for us, they work with us.

“The Riverview is one big family,” comments Mara. 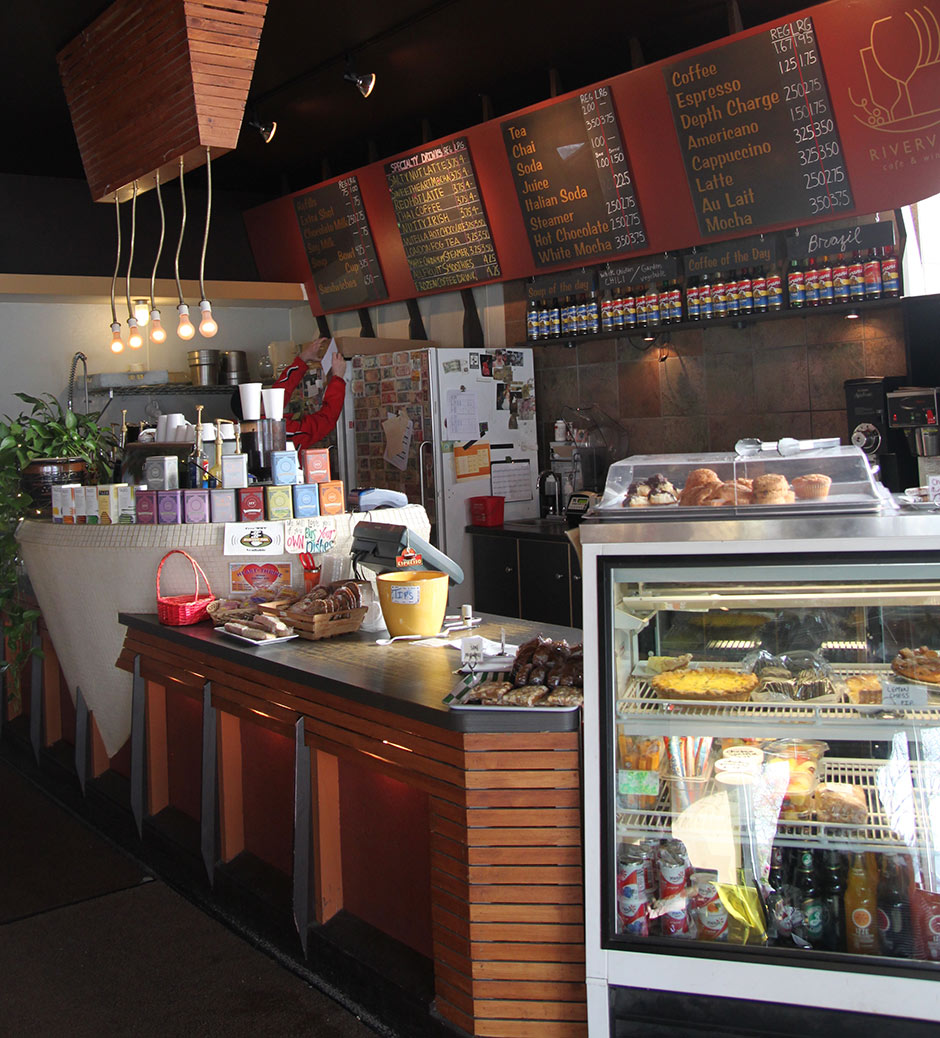 The Cafe today. The food is made in house and is mostly organic. Why is the coffee so good? All of the good juju. It comes from a small Duluth roaster that uses fair-trade beans.

Running a coffee shop isn’t easy. “You know its the hardest business in the world I think, says David. “It’s a difficult, fun business. There’s not a lot of profit in the coffee business, especially when we make everything in house….We could do high fructose, crappy syrups, low grade milk, we could do those things, but I don’t think we’d still be here.”

“We obviously didn’t get into it for the money, because we would have left a long time ago….In a lot of ways I feel like we’re the wealthiest people we know, and we’re not talking about money, I’m talking about lifestyle. I think the ability to live, work, and have almost your entire world within a mile around you has great appeal that a lot of people don’t get. We got to see our kids walk for the first time, we got to be around them for their first words.”

“Granted it was across the cafe floor,” jokes Mara.

“Once you’re self employed, it would be really hard to go work for somebody,” says Mara. “I think there’s been a real richness in creating our own schedule and life. Its crazy, you don’t work less. You work twice as much.”

Mara and David are working hard to keep the cafe interesting for their customers while still brewing up an excellent cup of coffee. “After 15 years people still come up to us and say, you know what? You’ve got the best coffee in town,” says David. “And it could be the whole experience, or it could be that we actually have the best coffee in town.” 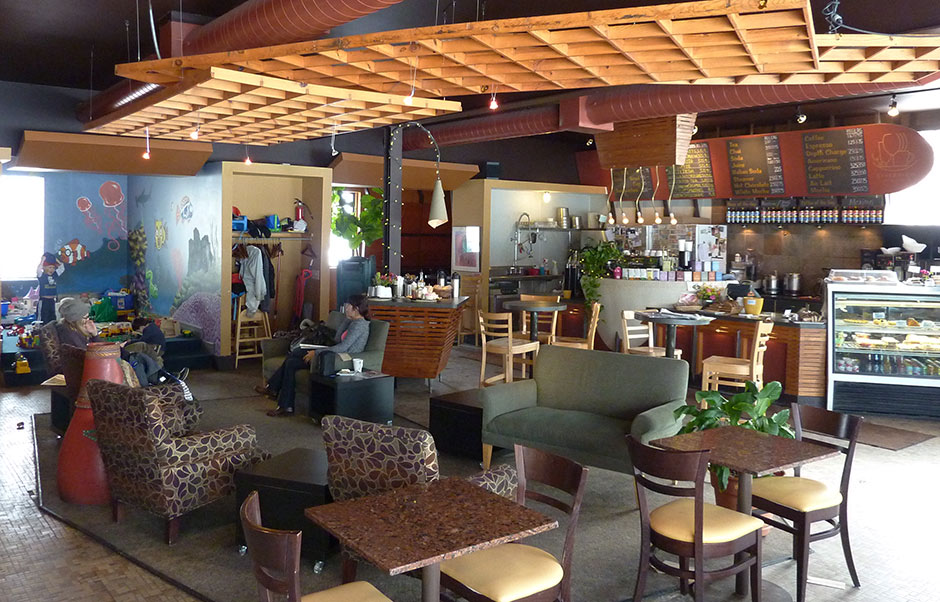 Much of the original materials from the building still are in the Cafe. Wood from shelves was repurposed into trim and decor, and the floor from the 1930s is still in place.

When Mara and David realized they had fallen in love, they also discovered they were great business partners. They both describe themselves as self-motivated and able to thrive as self-employed people.

But their partnership is also what keeps them going day after day. “That’s probably why it works,” comments Mara. “The day you say you’re done, I say ‘no we’re not,’ and the day I say, ‘I’m done,’ you say, ‘no we’re not.’”

How a Cafe Can Change You

At the end of our conversation, David talks about how the Riverview has changed him. “I’ve learned who I am. I’ve grown up. I’ve grown up to be content being in one spot.”

“We’ve been part of people’s lives, and they’ve been a part of our lives,” says Mara. “It’s a huge rich family…that’s what I like about it….I love coming in and saying good morning to twelve people that I know and they’re interested in my life just as much as I’m interested in their life, and it’s not a token hello…. It’s a conversation. We have conversations with people and it’s genuine, and I find that interesting.”

“Would we do it again? In a heartbeat,” says David.

The Riverview Cafe has seen first dates, engagements, new babies, and even a wedding reception in its fifteen years.