Beginning In 2011, Riverside Avenue — one of the main arteries serving the Cedar-Riverside, Seward, and University communities — will be getting a dramatic overhaul, as a $12 million construction project gets underway to completely redesign the road, lanes, and sidewalks.

The project, headed by the City of Minneapolis, will be completed in two phases: the first construction phase will stretch from Cedar Avenue to 23rd Avenue South; the second phase picking up from 23rd and running to where Riverside ends at Franklin Avenue.  The project is also notable for another reason: it is one of the first major road construction projects being planned since the Complete Streets bill was signed into law earlier this spring, and represents the first attempt of government to live up to the new mandates of community inclusion, consultation, and public debate. 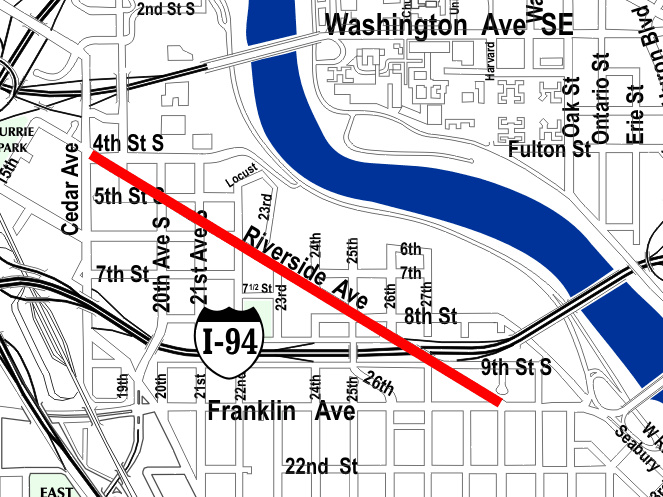 To that end, the planning phase has been notable for its relatively high level of community outreach — a process that has involved public presentations on evolving street design, individual consultation with property owners, and input and collaboration from a wide variety of stakeholders.  With final City Council review expected to take place sometime in September or October, success depends on balancing the need to meet project deadlines along with the necessity for stakeholders to be thoughtfully included in the process.

To assist that process, the first public presentation took place on June 22nd at the African Development Center, located on Riverside and 20th Avenue South — one of the many challenging intersections on Riverside for cars, cyclists, and pedestrians to navigate, as five streets connect in a tangle of different directions.  The meeting, facilitated by transit consultants Michael Ronkin and Michael Moule, who were brought in to assist the city with its street design plans, was the first chance many had to see the city’s outline for the construction project.  Though the plans were only 25 percent complete at the time, what was readily apparent was the city’s goal of transforming Riverside Avenue into a street that combined car, bike, and pedestrian traffic in a way that allowed each constituency to feel well served by the project.  A subsequent meeting was held at Augsburg College a short while later, with two final public presentations scheduled for Tuesday, August 24th, one at the Seward Towers East Advantage Center (2910 E Franklin Ave) at 6:30 p.m., and again at Augsberg College in the Oren Gateway Center, in room 111 (2211 Riverside Avenue) at 10:00 a.m.

At a June 22 public meeting, it was apparent that the outreach project had stimulated a fair amount of interest in the growing community of cyclist and multi-modal transit advocacy groups. Members of Transit for Livable Communities, the Minneapolis Bicycle Coalition, and the often overlapping supporters of Nice Ride MN, the bike rental program begun in Minneapolis earlier this year, were well-represented in the audience of around 40 people.

“It’s part of people’s lives and how they get around, and I want to make sure they can do it safely and comfortably,” said Ethan Fawley, a member of the Minneapolis Bicycle Coalition, a local grassroots volunteer organization that advocates for the perspectives of cyclists in planning transit within Minneapolis.

Fawley, an attendee of the June 22 meeting, was one of several participants who spoke up about the need for a dedicated bike lane running along the entirety of Riverside Avenue — both to recognize that the stretch of road has already become a main biking route for commuters in the area, and to plan for future growth in bicycling among students at the nearby University of Minnesota and the local community in general.  “As a person who used to take Riverside everyday to school, I didn’t feel the safest always, or the most comfortable as a bicyclist,” continued Fawley. 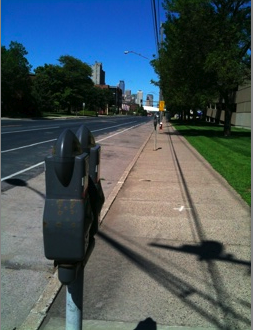 When shown rough outlines of what the city was planning, cycling advocates and the meeting facilitators discussed a wide variety of bike-friendly options, from dedicating one or more lanes for cyclists going each way on the street, to building a parallel, separate “bike street,” complete with its own curbs and traffic signals, between the street’s curb and the sidewalks.  Ultimately, the crowd seemed to coalesce around the idea of a continuous bike lane that would run the length of Riverside Avenue. Early plans had called for a gap in the bike lane, between portions of 25th Street and 23rd Street. The consensus called for a bike lane that would be visually distinct from the rest of the street, whether through paving it with a different material, like asphalt or a different consistency of concrete, or through painting it a distinct color.

“Bike lanes seemed to be the best option for bicycling on Riverside Avenue,” said Fawley about the city’s different proposals regarding bike transit, “some way to make it more prominent, so that people can feel more comfortable and safer… you are dealing with a lot of university students who, once they get to campus, can feel very safe, but if they’re going to venture off of campus, it helps to have something like a colored bike lane, or a raised bike lane, or a wider bike lane just to make it clear that this is an important corridor for bicycling, and that we want to make it safe and comfortable for everybody.”

“This is when the public process really happens… it becomes really easy to say ‘hey, there are a lot a great ideas there; what are the things we can work together to improve, and make it a better street for everybody?'”

Redesigning for a whole community 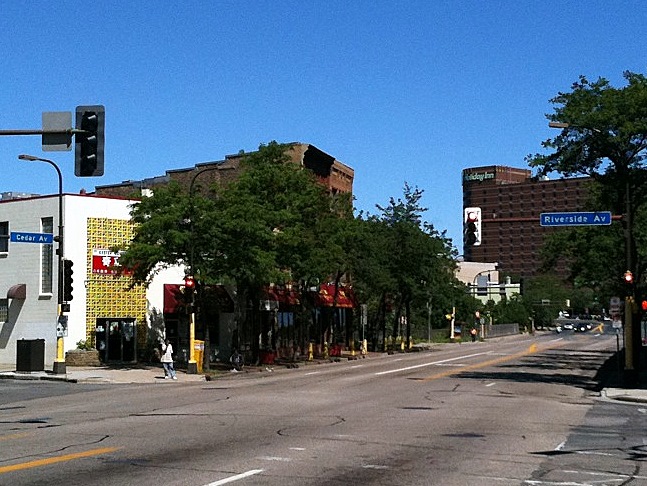 There are signs that Complete Streets legislation have made a marked change in the way city planners have approached this project, allowing public input earlier, and more openly, than ever before.

“I think part of what’s happening, which I think is really exciting, is that the city did come to us with a 20 percent complete plan, and I haven’t specifically done an infrastructure project in Minneapolis before, but from other neighborhood stakeholders, everyone is feeling that that was fantastic,” said said Katya Pilling, Associate Director of Redesign, a non-profit community development corporation that has been helping to facilitate collaboration between city planners, community groups, local residents and the business community with the Riverside Avenue project.

“I think the other element for me and our neighborhood is that we’ve built up our capacity over the last couple of years because we’ve worked together as all these neighborhood entities… so we were very ready to engage in a technical conversation with the city about these plans, and so the timing there was really good,” Pilling continued.

Founded over forty years ago, Redesign is no stranger to working with the city regarding community revitalization efforts.  Its first major project in the early ’70s was within the Milwaukee Avenue development that many residents may be aware of as the pedestrian-only neighborhood street of houses, running north and south from Franklin avenue to 24th Street E., originally built in the 1880’s and 1890’s.*  The project was the first Planned Unit Development, and was designed when the city had plans to tear down a third of the Seward neighborhood in an urban renewal project that residents opposed.  Now, Redesign finds itself in a more nuanced role: that of helping a city project along, but facilitating input from neighborhood stakeholders.

“We are a community developer, so we see our role as also facilitating community planning, and really comprehensive revitalization strategies …so that includes infrastructure, and Riverside is clearly infrastructure… anything physical about the neighborhood is our turf, so to speak,” said Pilling.

When asked if the passage of the Complete Streets provisions in this spring’s transportation bill had any impact on what the city was proposing, and how they were involving community elements, Pilling had praise for the planning and execution of the project: “I think everyone was pretty impressed that they [the City of Minneapolis] were more innovative and more responsive that we would have expected, and I do think… you can attribute [that to complete streets legislation].  There are concepts and elements in complete streets that support that [view].  We were all kind of impressed with how far they went with things, which is further than, years ago, what I would’ve seen in a plan from the city.”

Taking a chance, reaching out to the uninvolved 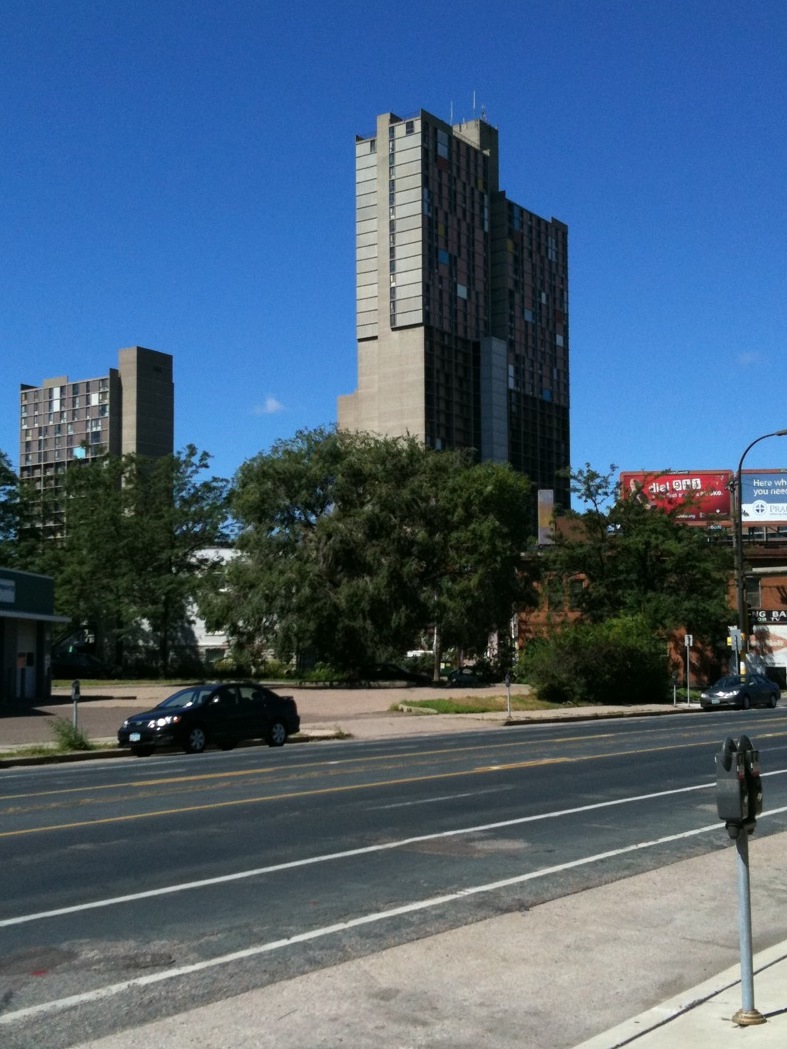 Throughout the process, one group that has at times been noticeably absent has been Cedar-Riverside’s large population of Somali residents, most of whom live in and around the Riverside Plaza area, just west of Cedar Avenue.  While Fredda Scobey, the Executive Director of the residents’ association, has been involved in the planning review process, broader involvement of residents has not materialized.  Although two final community meetings have been scheduled to elicit further public involvement, neither will take place in the Riverside Plaza area, and it seems unlikely that they will draw much additional attention from Somali residents of Cedar-Riverside.

One vehicle of Somali engagement that does seem to be gaining steam is the West Bank Community Coalition (WBCC).  The coalition, which encompasses a broad array of topics and sub-committees, has seen a marked rise in Somali participation.

“What happened was, last fall, new leadership was elected to the WBCC, and predominantly new immigrant leadership,” said Merrie Benasutti, the associate director of the Center for Integrative Leadership at the University of Minnesota’s Humphrey Institute, just down the street from Riverside Plaza, “and that leadership has really encouraged greater participation of new immigrants in all of our neighborhood committees and organizations.”  Benasutti, who sits on the WBCC’s Land Use Committee, can see the opportunity for greater involvement of the Somali community in the Riverside project through the WBCC’s role as a community stakeholder regarding area infrastructure development projects.

Benasutti is also the coordinator of the Cedar-Humphrey Action for Neighborhood Collaborative Engagement (CHANCE), a community organizing initiative of public policy graduate students that began two-and-a-half years ago.  Benasutti envisions CHANCE taking a hand in the upcoming academic year with how the reconstruction project affects residents near the Cedar Avenue terminus of Riverside.  Whether that means building on previous work done with the business community of the area and helping them take advantage of the infrastructure being built to their doorstep, assisting residents of the Cedar-Riverside neighborhood to understand and get involved in the ongoing planning process, or some as-yet-unknown direction that both the community and CHANCE members can agree on, at this point is unknown.

With the Riverside Reconstruction plans moving steadily towards review by the city council, area stakeholders will have a short window of opportunity to shape the plans that will affect their community for decades to come.  While many details remain unfinished, what is certain is that this project will serve as a lesson in process for many projects in the future.

*CORRECTION 8/19/10: as originally published, sentence read: “Its first major project in the early ’70s was the Milwaukee Avenue development that many residents may be aware of as the pedestrian-only neighborhood street of houses, running north and south from Franklin avenue to 24th Street E.”