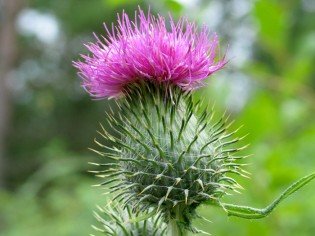 The Cherokee Heights Garden Club has celebrated seventy-five years of service. They have faithfully beautified and tended the flowers on Smith Avenue at the High Bridge for years. Returning from a walk in Cherokee Park, I pass by the High Bridge flowerbeds. A seventy-something woman is tending the spider lilies and bachelor buttons, deadheading a few and weeding between the plants. She has brought a minimal set of tools in a basket. I nod as I walk by, giving her a thumbs up for her work and continue on my way north toward the river bench.

I see she has come upon a large, nasty thistle weed. Removing it is a task she seems willing to take on. She’s wearing leather gloves, and she reaches and attempts to pull out the weed. This thistle is large and stubborn, and won’t budge for her.

I observe her looking around for a volunteer, someone who might be strong enough to pull the weed out for her. Sure enough, a young kid is walking toward the Super America station. He is listening to his iPod and not paying her any attention. She must be a trusting person. As he passes by, she touches his upper arm to gain his attention. He’s somewhat startled to have a stranger touch him. He steps back slightly and looks at her as if to say, “Lady, are you crazy, stopping a stranger by touching him?” The difference in their generations becomes obvious. For her it was a natural non-threatening gesture of communication. Of course there is no threat, but there is the natural instinct and posture of warning between the two of them before they both recognize how silly their initial encounter must have looked.

He pulls out one ear bud and asks, “What do you want?” She looks at him, smiling, and points to the stubborn thistle. He nods “Yes.” She hands him her leather gloves, and he carefully steps into the bed to get a good low gravity-hold on the stem. He steps in and yanks, taking his time and working the plant loose.

The thistle comes out, and it holds a large clump of black soil in its roots. He’s smiling, and she is too. She pokes around in her garden basket, stands up, and fastens a pin to his tee shirt, then salutes him as a new recruit. He hands back her gloves and looks down at the pin on his chest, grinning with pride and purpose as he puts the ear bud back in his ear. She turns to shake off the root soil into the bed and tosses the weed into the trash.