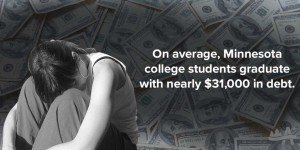 On average, college students in Minnesota graduate with nearly $31,000 in debt.

Last month, President Barack Obama announced that he wants to provide free community college for high-achieving high school seniors. The plan’s goal is to reduce the growing rate of income inequality, as well as make education more accessible for everyone.

The community college proposal seems like an even better idea considering last week’s news from the Federal Reserve Bank: more U.S. college students are borrowing more money for college, while the total student loan balances tripled over the last 10 years. From 2004-2014, the number of student borrowers climbed 92 percent, leaving 43 million students with loans to repay.

Despite our state’s high levels of student debt, the Twin Cities area was recently recognized nationally by the Atlantic as an ideal place for millennials to live following college graduation due to our high levels of employment and affordable housing.

More broadly, among residents under 35, the Twin Cities place in the top 10 for highest college-graduation rate, highest median earnings, and lowest poverty rate, according to the most recent census figures. And yet, according to the Center for Housing Policy, low-income families can rent a home and commute to work more affordably in Minneapolis–St. Paul than in all but one other major metro area (Washington, D.C.). Perhaps most impressive, the Twin Cities have the highest employment rate for 18-to-34-year-olds in the country.

While Minnesota is a great place for young people to live and work, the amount of student loan debt they’ll face once working is staggering.

Plus, the accumulation of debt doesn’t show many signs of slowing down any time soon. College education will be necessary for our future workforce to thrive. A report by Georgetown University in 2013 found that 74 percent of Minnesota’s jobs will require post-secondary education by 2020.

With news of climbing rates of student debt, proposals like President Obama’s are necessary to combat the crushing loans an entire generation is responsible for repaying.