In what would turn out to be her last days, artist Louise Bourgeois committed her energies to marriage equality, making a dye-and-embroidery print to benefit Freedom to Marry. Sunday morning she died at age 98, capping a long life of engaged activism through and outside of her art. Two days ago the sculptor and painter had a heart attack, according to her studio. Her work — sometimes figurative, but often abstract and symbolic — often referenced women’s sexuality and memories from childhood. “My childhood,” she once said, “has never lost its magic, it has never lost its mystery, and it has never lost its drama.”

Of her giant spiders, perhaps her most famous recent works, she said in a rare 2007 interview, “The spiders were an ode to my mother. She was a tapestry woman, and like a spider, was a weaver. She protected me and was my best friend.”

As a woman artist — and one who delved into radical politics and human sexuality — she was a pioneer. “She smashed a taboo,” said Christopher Knight, art critic at the Los Angeles Times. “Bourgeois was the first Modern artist to expose the emotional depth and power of domestic subject matter. Before her, male artists had only nibbled around the edges, and women just weren’t allowed.” 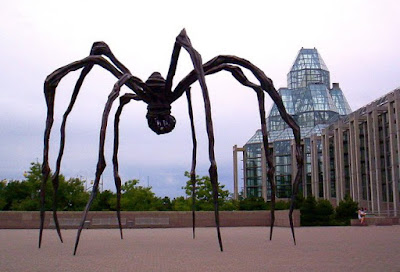