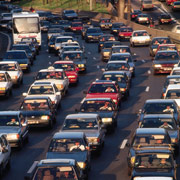 In the 1950s, long before America’s social atomization described in the book “Bowling Alone,” my dad went to work in a carpool. The other travelers were his fellow Ph.D. scientists at DuPont’s ivy-covered Experimental Station in Wilmington, Delaware. Many of the old laboratories on the DuPont campus are gone, and carpools are largely a thing of the past, as well.

Among the Twin Cities’ 3 million residents, barely 7,000 people commute in registered car and van pools, according to the latest Metro Transit and Metropolitan Council counts. That’s not to say there isn’t continuing interest in this efficient and economical way of getting to work. This year alone, more than 3,600 people have searched for carpool partners using Metro Transit’s online ride-matching software.

October is Rideshare to Work Month, Metro Transit’s effort to tell more commuters about the ease, reliability and perks that come with carpooling. The pot’s even sweeter for checking it out this month, with chances to win a Kindle Fire, Netbook or $25 Target gift cards. There’s a special drawing for Facebook users who register and post about it on the social media site.

Carpooling can cut commuting costs in half or more, save wear on your car and let you breeze past freeway ramp meters and gridlock in free carpool lanes. On the downside, you lose some freedom to come and go as you choose, but not as much as you might think.

For those who carpool—or take transit, walk or bike—to work or school at least three times a week, Metro Transit offers a guaranteed free ride home if you have to work late or respond to an emergency. The program has 6,258 registrants, who have been reimbursed for 621 trips so far this year.

Carpoolers also may be eligible for free or discounted parking in Minneapolis and St. Paul and even cheaper car insurance.

There’s also a carpooling-on-steroids plan offered by the Met Council that pays half or more of the lease on a 7-to-15-passenger van and allows the primary driver and pool coordinator to rack up 250 personal miles a month. Lease rates depend on the size of the van, the length of the commute and number of passengers, and primary and backup drivers receive regular $100 and $50 stipends for their efforts. You can cancel out with a 30-day notice.

Metro Vanpool has 69 registered pools carrying 583 commuters. Drivers pay nothing but their share of the lease, while the average vanpool rider pays $110 a month.

Most Rideshare pools, however, are arranged to suit the participants. Creating a commuter account on Metro Transit’s website is a simple, 10-minute task that lets you find and contact others who live nearby and can share the workday ride. Users average nearly 10 matches per search, but if you don’t find one at first, try again because new potential partners register every day. In all, more than 26,000 local residents are enrolled in Metro Transit’s Ridematch/Travel Demand Management System, according to spokesman John Siqveland.

Metro Transit also offers tips for a successful carpool, including how to share costs, establish policies like smoking or non-smoking and keep everyone in the loop when someone skips the ride for a day.

Even with all its benefits and incentives, carpooling these days struggles to gain a foothold in our individualistic culture. But bargain-hunters may still be lured by the money, time and hassle savings of collective commuting, not to mention the opportunity for new friendships. My dad made some that way.