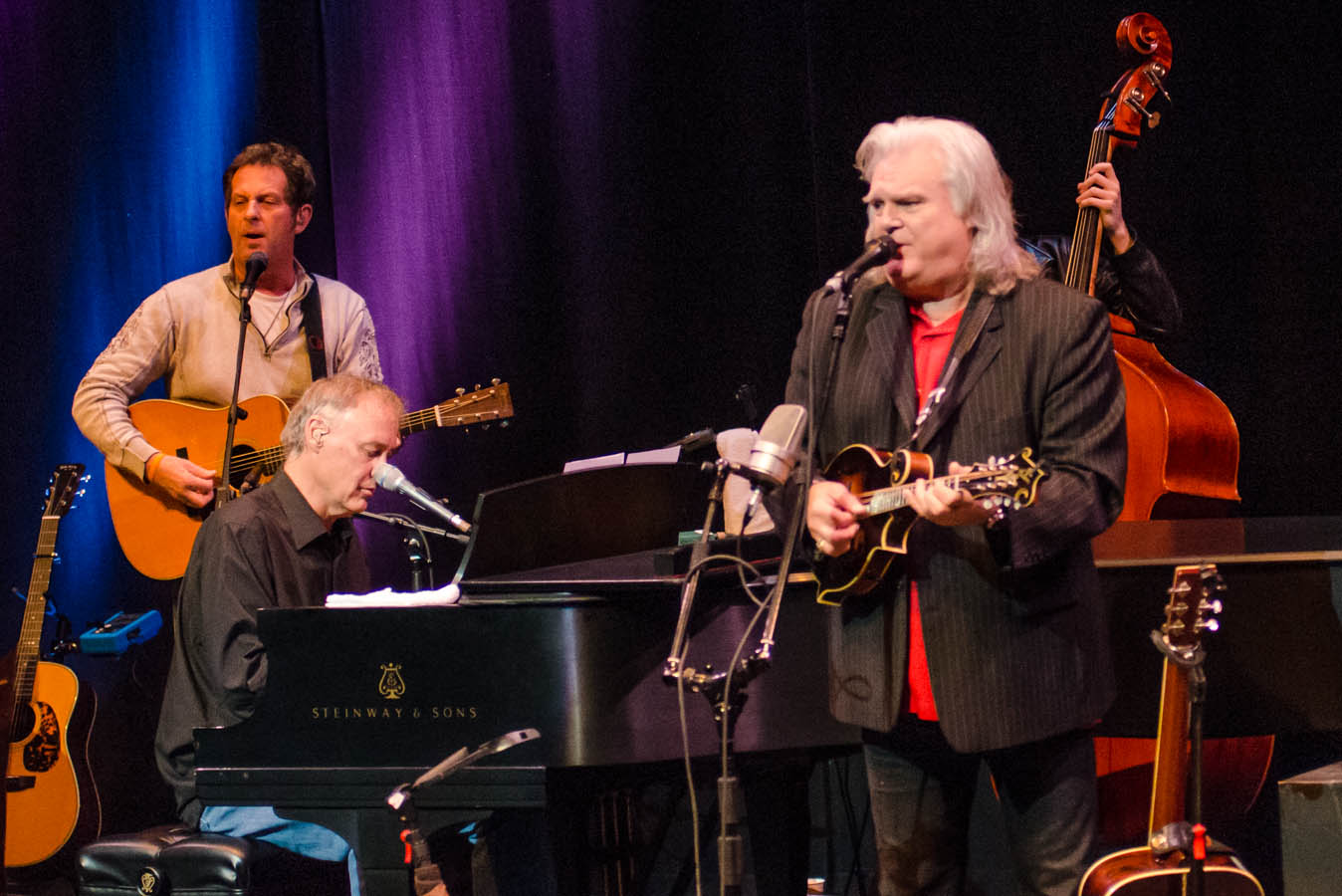 An almost sold-out crowd welcomed legendary musicians Ricky Skaggs and Bruce Hornsby and settled in for a toe-tapping, hand clapping, fast moving night of amazing music with a heavy concentration on bluegrass, followed up by rock and gospel sprinkled with elegant jazz moments. If I could write this review as fast as they could play, I’d be done in 30 seconds flat, which makes me wonder if anyone has measured the speed of Skaggs’ hand on mandolin strings, or of Hornsby’s fingers on the piano keys? My guess is that it would rival World Series MPH pitching numbers.

The music started just shy of being on time, and played on for well over two hours straight.  Skaggs and Hornsby shared the November 2 spotlight at the Burnsville Performing Arts Center with Kentucky Thunder featuring Andy Leftwich on fiddle, Cody Kilby on lead guitar, Paul Brewster on rhythm guitar and harmony vocals, Justin Moses on banjo and dobro,  Mark Fain on bass, and Ed Faris also on rhythm guitar and adding baritone vocals. Patrons were able to meet the musicians after the show, too, as the tour is doubling as a book release party for Skaggs and his autobiography, “Kentucky Traveler: My Life In Music” and the Hornsby/Skaggs “Cluck Ol’ Hen” CD launch.

The show opened with the unmistakable sounds of Skaggs’ mandolin playing which was supported first quietly, and then more intensely, by Hornsby’s signature piano playing. Both men are masters at their craft and play their instruments effortlessly (it would seem) and with a sense of self-assuredness that contributes to fantastic partnering as each played to each other’s strengths. It never (thank goodness) played out like ‘dueling banjos.” It was more like jazz as each performer, Kentucky Thunder included, could pick apart a song’s melody and spin into a short, meaningful solo. There was always an easy exchange of the spotlight. There were moments of perfect vocal harmonies and fantastically dissonant rhythms.

Both headliners responded to shout-outs from the crowd including a snippet of Hornsby’s “Prairie Dog Town.” When, surprise, a string broke on the bass, the audience was introduced to the Kentucky Thunder players individually, and Skaggs shared the heartwarming story of being called up on stage at age 6 to play “Ruby, Are You Mad at Your Man”. (More about his storied life in music is detailed in his book.)

All the performers were on their marks, looking great in a sea of denim and black, admitting that although they’re over 50 (or well, most of them anyhow), there are occasionally still major stages to star on—most recently Conan O’Brien’s. When speaking about how the two musicians came to sing each other’s songs in the first place, Hornsby also noted that Tupac had sampled his “That’s Just the Way it Is’ (he liked it) in the hit “Changes” (1988). Hornsby went on to talk about appreciating how musicians from different genres can do some great interpretations. Including one played out onstage as Skaggs and Hornsby broke out to Rick James’ “Super Freak”  (explaining that it’d sound like how Rick James would sing it with Roy Clark on ‘Hee Haw”).

Although this was a concert in a traditional setting, it felt intimate, with both Hornsby and Skaggs taking ample time in between songs to share stories including how they first came to play together (2000 — in Skaggs’ recording studio during a session for the “Big Mon” ‘album,’ a tribute to Bill Monroe) and how they share a love of simply making great music. The audience was invited on stage for dancing (this MN audience politely declined), some corny jokes were shared, some late-night-jam-sessions were relived, and, no doubt, some tales were told. Overall, it was immensely entertaining watching master musicians make perfect — and inspired — music. Per other reviews, each night brings its own special mix of scores and stories. A road trip or two wouldn’t be a bad idea. After all, if they can bluegrass-ify “Super Freak,” the sky’s the limit on what may come next. Stay tuned!