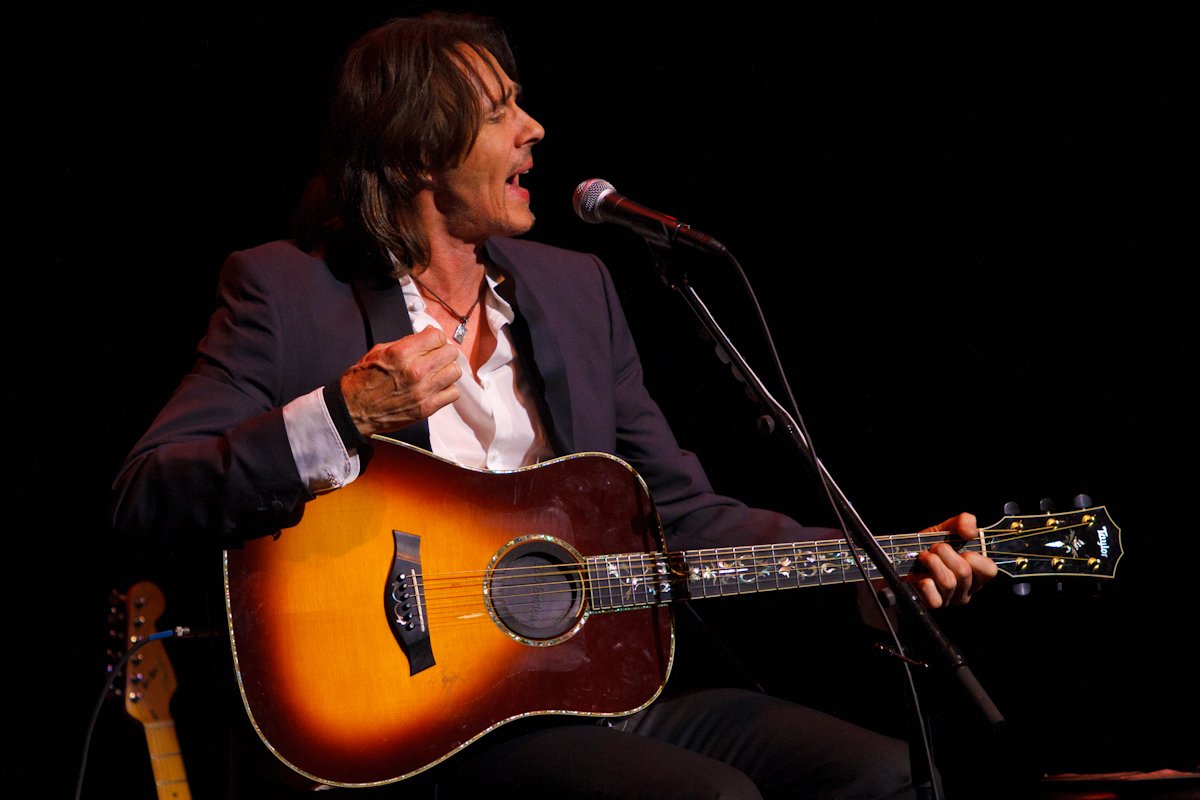 The first thing most people associate the name Rick Springfield with is his seemingly timeless 1981 chart topping hit “Jessie’s Girl.” On the other hand, many of his adoring female fans were first drawn to his character Dr. Noah Drake on General Hospital. Together, these two accomplishments enabled Springfield to springboard into a substantial entertainment career lasting more than 30 years including 11 studio albums, various acting roles and a best-selling autobiography.

Still relevant in 2014, Springfield made a March 23rd appearance at the Pantages Theatre in downtown Minneapolis as part of his “Stripped Down Tour,” his first attempt at a solo acoustic set in the Storytellers format. Of the Hennepin Avenue theatres, the Pantages certainly has the most intimate feel—making it a perfect fit for this show. Although the stage setup was minimal, it still had a classy look with a mix of fancy guitars creating a colorful backdrop for a bar stool, microphone and laptop. You could feel anticipation in the air as the crowd of mostly women was busy talking about their obsession with the artist while also busy grabbing cocktails and taking selfies by the marquee and in front of the stage.

Fans expressed their excitement as Rick Springfield appeared on stage in a stylish suit truly looking half his age and fittingly launched into “I Get Excited.” Although it was clear the motivation for some in attendance was Springfield’s good looks, most where longtime fans as was evident while they not only sang along, but knew all the words. Springfield performed some standout tunes early on and proved to be in good voice on “Love is Alright Tonight.”

Already having worked up a sweat, the suit coat came off triggering another wave of screams prior to Springfield exercising his skill at the storytelling piece of the show. This was also used as a vehicle for him to promote his new book “Magnificent Vibration” due out May 6th. He seemed very comfortable sharing his experiences and often had the audience laughing. It actually was interesting to hear some of his life experiences and learn about the inspiration behind many of the songs, which did add another level of appreciation to the performance.

Springfield showed he’s a capable guitarist, but his vocal kept standing out as his star quality. For example, he nailed the falsetto lines on “Inside Silvia” while upping the entertainment value by playing the guitar chords with his I-phone. Using still more technology, the catchy chorus on “Honeymoon in Beirut” was fattened up nicely with harmonies provided by the laptop he called his band in a box. He didn’t really need it though for songs like “Don’t Talk to Strangers”, where all he had to do was point and the audience could sing any part he directed them too.

The most touching part of the evening developed with an explanation behind two songs that were written as a result of his father’s passing. The performance of “April 24, 1981” and “My Father’s Chair” was inspired and emotional. He shifted into high gear for the Sammy Hagar penned “I’ve Done Everything for You” and the popular “Love Somebody,” which along with new song “Our Ship’s Sinking,” was the strongest material of the night. Of course the show could only properly end with the tune everyone came to hear, “Jessie’s Girl.” Fans were even inspired to rush the stage and make that up close connection with Springfield, fulfilling the expectation of what you’d hope to get out of this Stripped Down performance. In place of an encore, Springfield did return to the stage for an informal Q&A session, which added a unique twist to an already worthwhile evening.