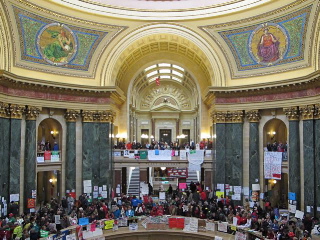 The revolution may not be televised, but it won’t go hungry either. There are bananas and apples, carrot sticks, granola bars; the kinds of snacks you’d expect nurses and librarians to nibble on. Air mattresses bank the walls. Sleeping bags, rolled lengthwise, are pushed against the granite balustrades like towels against a drafty kitchen door. On the third floor of the Wisconsin state capitol, it looks like they’re planning to stay.

In a corner sits an open box of hand-warmers and another with bags of throat lozenges. “We have toiletries; Kleenex, tampons and hand sanitizer,” a sign proclaims.  Someone has taped a wish list to one of the polished pillars. They’ve used the blue painters tape that comes off cleanly. The sign says they’re seeking socks, and children’s vitamins, and gluten-free crackers. You’ve got to love a movement that considers the needs of celiac suffers.

The only thing you couldn’t find at the Wisconsin state house last week was opposition. The tea-party buses hauled people from three states to Madison on Saturday. But, by mid afternoon on that day, only a couple dozen clung to a lone barricade on the south side of the square, while a few hundred more held out at the back steps of the capitol. It was a pretty limp showing next to the tens of thousands that showed up for worker’s rights.

Days later, the tea party has seeped away, leaving not a sign, a t-shirt or a chant. I don’t doubt that they’ll be back, in some form, but at this point it seems clear that supporters of Wisconsin public employees are feeling right at home.