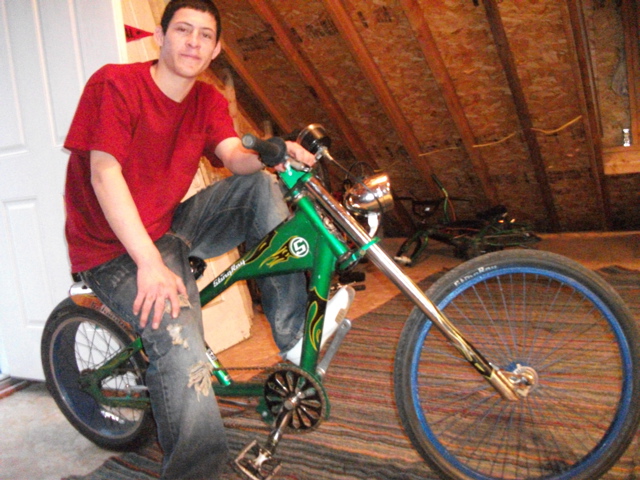 Jose Cruz is one of three teens who work together on bikes. (Photos by Jeanette Fordyce)

Last May, three teenagers from Dayton’s Bluff wanted to save money by fixing up their own bicycles.  One year and 12 bikes later, they want more bicycles to renovate for selling.

Sixteen-year-old Jose Cruz from Johnson Senior High School is very proud of his chopper.  “When I ride my bike, I forget everything,” said Cruz. “I get to travel and it is freedom.”

“There is no stopping with bikes,” said Pedro Garcia a 14-year-old student from Humboldt High School. “I ride in the winter and have tried pulling a sled with my bike.”

Last May three teenagers — Pedro Garcia (14) from Humboldt, Riley Soeffker (14) from Central, and Jose Cruz, all from Dayton’s Bluff — started renovating abandoned bikes at a garage at Fourth and Bates.  They wanted to save money and have the freedom to travel.  They all live within blocks of each other.

“We find abandoned beat up bikes, bikes thrown in dumpsters or the junk man gives us parts or bikes,” said Soeffker. “We shine up the chrome, paint and repair.”  They have worked on 12 bicycles this past year, selling bikes to neighborhood kids for $5 to $10.  The teenage bicyclists like jazzing up their bicycles with shiny rings, tags and even mounted MP3 speakers.

Ten adults lined the route as 15 kids raced their bikes through the hills of Dayton’s Bluff over Fourth Street, Maple, and Maria.  “We are hoping to do it again this summer,” said Kari Soeffker.

For the future, the teenagers keep dreaming about a building at 7th Street and Bates, known as Budget Tires.  “We want to call it, ‘The Garage’ and have it open for youth to come to learn all about bicycles and just hang out.” said Cruz. 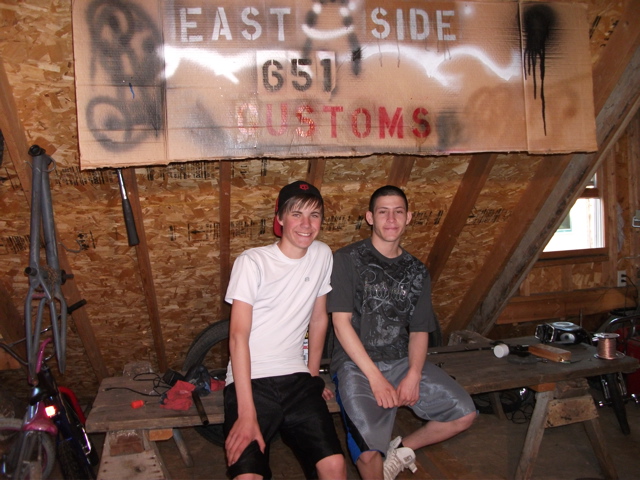 “We need to learn more about gears, permits and putting codes on bikes,” said Soeffker.  “We need a new air compressor.  The one we have now blows fuses.”  They need buyers for the repaired bicycles, at $5 to $30 per bike.

When asked what advice they would give other teenagers about working with bicycles, Riley Soeffker said, “Be organized.  You can spend a lot of time just looking for your tools.” Cruz commented, “Take yourself seriously.  Be proud of what you are doing.” Garcia said,  “Work hard and be creative.”

“None of them have their driver’s license as yet,” said Kari Soeffker, mother of Riley Soeffker.  “I’m hoping that this won’t affect their interest in bikes”

May is National Bike month.