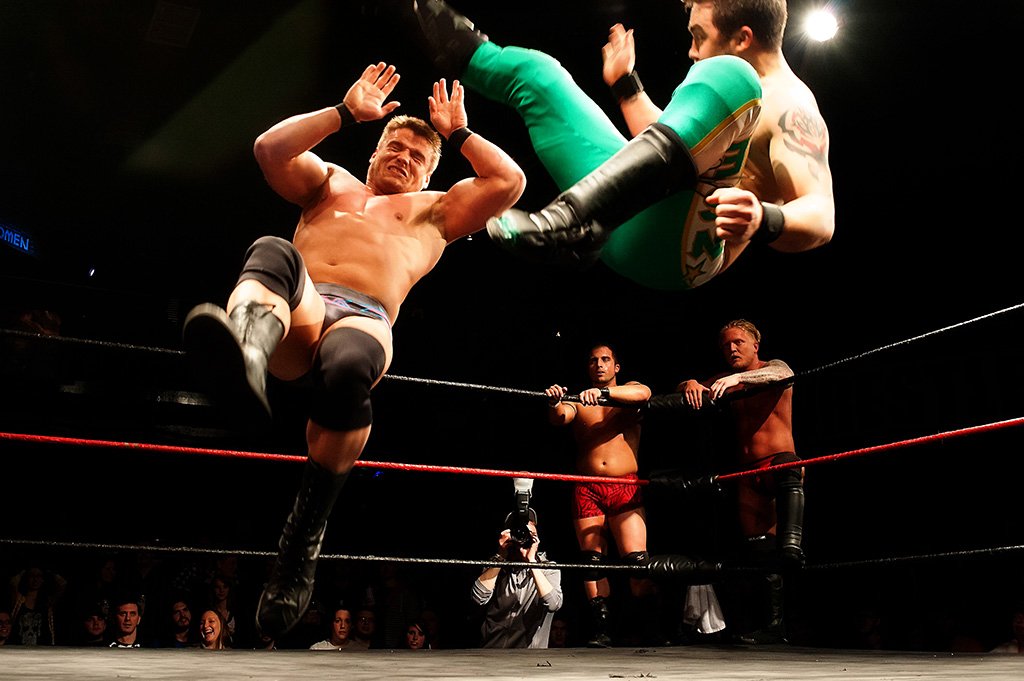 Friday, March 14th’s Wrestlepalooza event, the third of its kind, saw three distinct Minnesota scenes converge on historic First Avenue for a rare and amazing variety show which provided an experience like no other.

The event, which drew roughly 500 attendees in a mostly standing-room-only crowd, was sponsored by Pabst Blue Ribbon. The sponsorship was made incredibly obvious by the overwhelming amount of PBR signage, merch, and even a PBR photo booth in case you were one of the only individuals in Minneapolis who didn’t have a photo with you and a Pabst floating around on the internet somewhere already.

Combining the musical talents of Iowa’s Lipstick Homicide and Minneapolis’ own Bloodnstuff, the burlesque stylings of Queenie Von Curves and Sweetpea, and the over-the-top wrestling antics of local stars such as Arik Cannon, Ariya Daivari, Wildcat, and Horace the Psychopath, Wrestlepalooza III was a showcase of the bizarre in the very best way.

The evening was all about fun from top to bottom—no moment took itself too seriously. Case in point: The opening match was an extension of the epic and timeless battle of cats versus dogs, as Wildcat took on Yellowdog in a delightful farce which featured a chew toy, a ball of yarn, and alternating crowd chants of “woof” and “meow.”

Intense, almost overwhelming action was the theme of the evening, with high-spots galore as the wrestlers constantly sought to outdo one another. The high-flying antics were non-stop as the likes of CJ Esparza and Yellowdog took risk after ridiculous risk in an effort to bring the crowd to their feet, an effort which was not in vain as the energetic crowd was vocal and engaged in every match.

Of course, the $4 Pabst Blue Ribbon tallboys probably had a bit to do with that enthusiasm as well.

The music and burlesque performances were brilliant means of breaking up the wrestling card, creating a variety-show atmosphere which recalled hints of wrestling’s carnival attraction roots. Bloodnstuff and Lipstick Homicide were interesting counterpoints, with Lipstick Homicide providing a rather pop-punk sound akin to the likes of Green Day and NOFX, with possibly even hints of The Pillows, while Bloodnstuff’s instrumental work seemed like something which would accompany a modern zombie horror flick, while their vocalized jams had musical similarities that would be better left to someone more musically versed to identify.

While the night ended rather abruptly with no announced main event and the frontman of Bloodnstuff simply declaring that the final song would be “the last thing happening tonight,” it was overall a brilliant and distinctly Minnesotan event, with the only downside being that it happens but once a year.