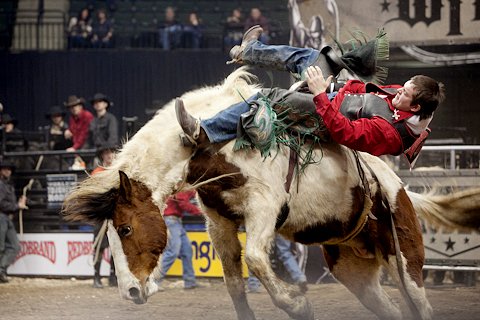 Photo credit Mandy Dwyer (from the World's Toughest Rodeo in 2012).

You know that saying, this isn’t my first rodeo. Well I can’t say that here. Friday, January 31st at the Xcel Energy Center I saw my first rodeo, the World’s Toughest Rodeo. It is a show!

The night starts with the lights down low, the fireworks, the flag, some prayers, more fireworks—everything building the excitement and starting a rapport with the audience. The emcees for the evening include the announcer and the rodeo clown. They tell pretty clean jokes about being fat and redneck. They keep the action going and there’s enough instruction to the banter so that a newbie can follow the action.

Turns out the action is pretty straightforward. The cowboy must ride the animal for 8 seconds to get a score. The scores, given by judges, are a combination of scores for the animal and the rider. If the animal is too tame for a ride you get a low score and an option for a re-ride. I don’t know the nuances of whether the judges award points based the form of your feet or torso or flare but after watching a couple of rides you can see the difference between a good ride and a better ride. There are a few main events: bare bark horse riding, saddled horse riding and bulls. There were two rounds of each—with the top two in each category competing against each other in the final rounds.

The riders on the bare back challenge seem to lie on top of the horse. It’s the most painful to watch. It just seems like your whole body must ache. Yet the bare back event had the most successful rides, at least on Friday. The saddle riders sit up straight in the saddle so it’s more like what you might picture. The bull riding is the most exciting. Only three riders survived eight seconds on the bull. We noted that two of the survivors appeared to ride the same bull. I’m not sure if that was a factor, but we noted it. We cringed and winced as we watched. Again the action is straightforward so we understood the scoring by the final round. So when someone got 91, we knew that was good. When someone fell off we know that wasn’t great.

The action feels very real, especially juxtaposed with the very staged progression of the evening. At the end of the night we are introduced—with more fireworks—to the top challengers. We get just enough of a back story to help us cheer for one or the other. The crescendo builds. We’re watching the battle against man and livestock—as well as the battle against riders. You get drawn in.

Amid the rest of the action are some sideline stories. Cowgirls do a barrel race, which is a timed race around three barrels. There’s a mutton busting round, where lucky kids from a prior competition get to ride sheep. It seemed to result in tears more often than not. Maybe five-year-olds are designed for riding sheep. Then the star of the evening, according to my nine year old, was Whiplash the Cowboy Monkey, who rides a Border Collie and herds sheep. You may know him as monkey from the Taco John ads.

At the end of the night, the riders and performers sign autographs. There’s a huge line to talk to them too. It’s young teenage girls making their parents wait, older teenage girls keeping their parents up at night, young kids, families, older women – OK an emphasis on women but some guys too. It’s a fun cap to the end of the night and a reminder to a first timer like me that some folks in the crowd do understand the nuance of scoring, they knew who to cheer for before the final introduction and they just might be back Saturday night (February 1) when the rodeo performs again.