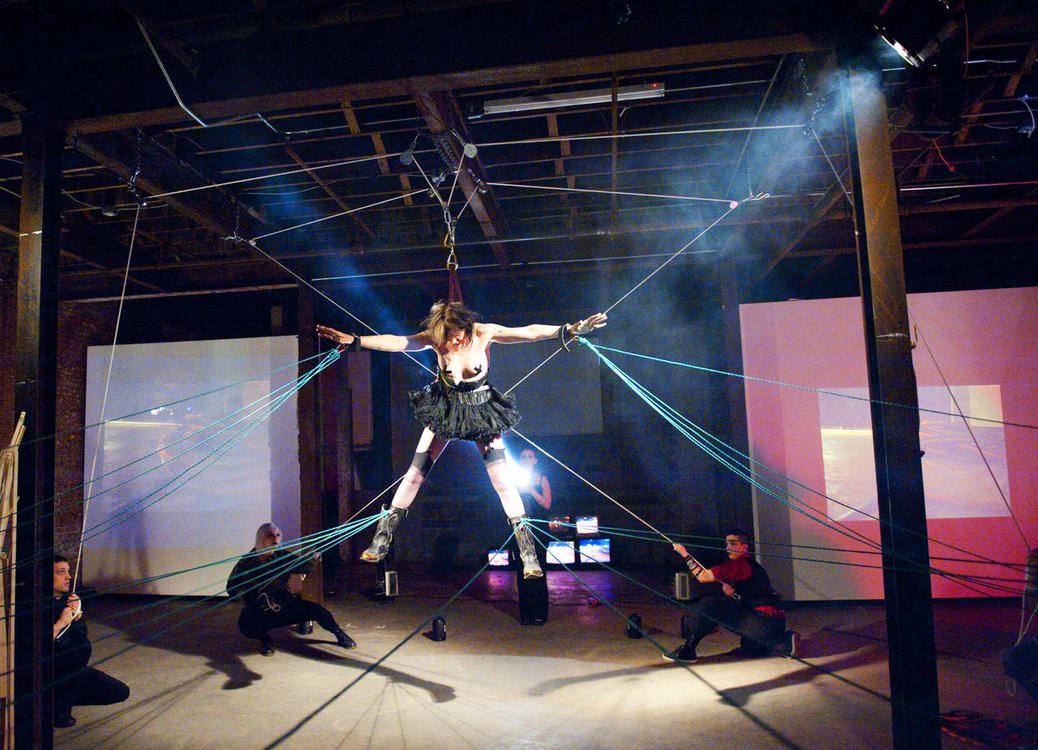 Venus DeMars, best known as the transgender lead singer of All The Pretty Horses, brought a new show to the Soap Factory last weekend: The Queer’s Book Of Journey: A User’s Guide For The Lost And Found. As the title indicates, sexual orientation plays highly in the latest work but I feel like this show speaks to a wider audience of souls who are lost and/or found.

The show starts with Venus telling tales and swinging over the stage like a bird. The audience (especially late comers!) are led through a maze to the stage that somehow makes The Soap Factory (one of my favorite galleries) look even more urban than usual. The mixed media TV screens in the back showing live feed from handheld cameras aimed at all corners of the space, the two drums on either end pounding and pounding and the audience standing around the stage like watching a street performance or car crash. It was immediately raw and drew me in like an accidental voyeur.

While Venus maintained cool composure, the other performers had a frenetic energy that beat like sensationalist news. Each performer told a brief bit about the character’s life based on sexual orientation. One woman spoke about feeling invisible first because she couldn’t speak to school friends about her first crushes as a young teen; and then feeling invisible again when deciding to marry a man. One actor spoke about the inverse correlation between his relationship with God and with the men he loved. He had been taught he couldn’t love both and was struggling to meet or conquer a God that would allow him to love both. There was a transgender man who explained a life of extreme acceptance or rejection but  was confused on how that acceptance or rejection hinged on bleak pre-scripted behavior. There were other stories told until the half dozen actors began to fight among themselves, which led to a melee, tearing down of the maze walls and movement of action and audience.

In what I’ll call the second act, the audience watched Venus build the structure of a bird. It took about 15 minutes. The frenetic supporting actors and the pounding of the drums kept the momentum as we watched Venus piece together the bird that must have has a wingspan of 12 feet or more once completed. Then Venus, with help walked through the space with the customs/structure she had just built before us. The symbolism of the self-made person was clear and made the wait while building more poignant.

The final act was most interesting to me. The stage moved again this time to the center of the room. A Day-Glo labyrinth taped to the floor was surrounded by candles from The Police’s Wrapped Around My Finger video. The performers moved the audience into place, not gently and not roughly, but definitely. Eventually we were all walked through the maze to have Day-Glo ashes put onto our foreheads. And, especially if you’ve been brought up Catholic, it’s a little strange to walk through a Gothic version of an annual tradition with Day-Glo ashes from a scantily dressed transgender priestess.

This scene morphs into a ceremony where the supporting performers cut off most of Venus’ clothing. So it’s uncomfortable, again being the accidental voyeur, and yet not looking away. Eventually we are watching Venus in all of her glory. Venus had the face of a child with kohl-anime eye and pigtails, yet a body that is adult and both male and female. While obviously that is an extreme case of dual (or triple) identity there was something about the hyper-ritualized, hyper-urbanized, hyper-drum pounding atmosphere that made the three faces of Venus seem more universal. A key to the universality, I think, was Venus’ serene demeanor amid the craziness.

The Queer's Book Of Journey: A User's Guide For The Lost And Found at the Soap Factory