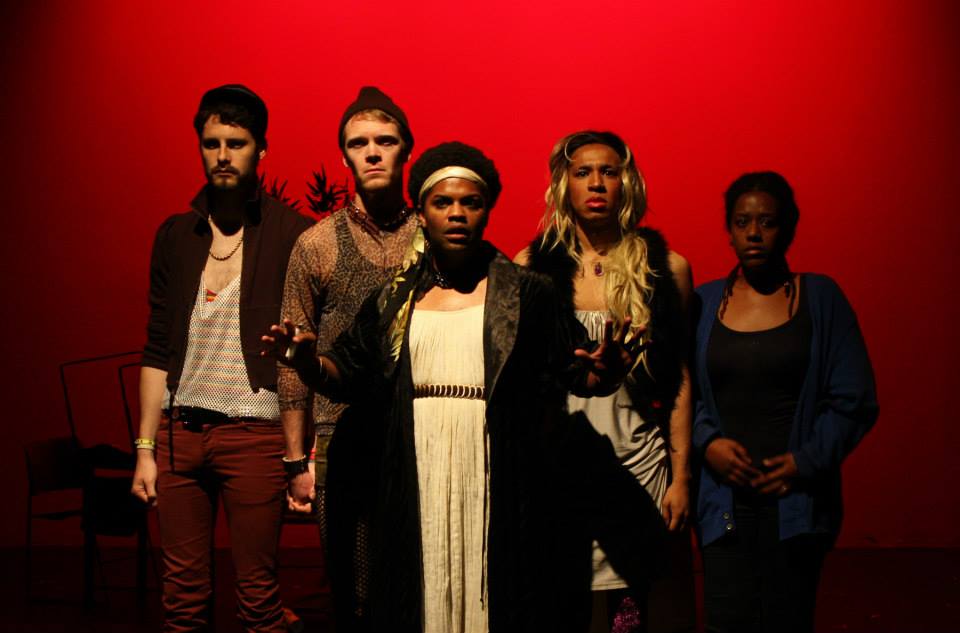 You know you’re a theater geek when you don’t really read the program before watching the show and then suddenly realize, “Oh, wait a minute, this is a drag version of Euripides’ Greek tragedy The Trojan Women” – and this revelation makes you fall in love with the play almost immediately. That was part of the fun of watching And She Would Stand Like This, a play in drag as part of Set B in 20% Theatre Company’s latest iteration of their Q-Stage new works program playing at Intermedia Arts. Even if you read the program more carefully than I did and were clued into the source material ahead of time, it’s also fun to see how they take that source and update it. Oh, the names remain the same, that’s the giveaway, but the context for the different relationships have shifted. Rather than the aftermath of the Trojan War, we’re in a modern day time of plague – though the plague is unnamed, you can fill in the blank for yourself fairly quickly.

“There’s a hole in the world now.”

Harrison David Rivers’ adaptation wisely gives his Greek chorus stand-ins actual individual personalities first. Though they’ll operate many times as a unit later in the action, Grace (Anthony Michael), Miss Scott (Mike Snow), and Baby (Benjamin Kolis) all get their moment to introduce themselves and their particular plight – the circumstances which led each of them to encounter Hecuba (playwright Rivers in the lead role). Hecuba has gathered her own chosen family of society’s orphans and castoffs and started to build a community of survivors. Once more they find themselves in a hospital waiting room, anticipating news, not expecting it to be good. There’s poor Cassandra (Reyna Rios) who can see the future but no one believes her, so she’s got a one-way ticket to a rubber room. There’s also Andromache (Selam Yosief) who has to trust the modern medical establishment to help save her young child. Medicine has its representatives in Nurse Talthybius (Suzanna Victoria Cross) and hospital administrator Elena (Lynda Dahl), an old friend and nemesis of Hecuba’s, who is trying to save her own son Honesto (Martino Gabriel-Mayotte) from the fate of Hecuba’s ragtag group of misfits.

“Have you noticed that a word begins to lose all meaning when you say it over and over and over? Grief. What a funny sounding word.”

Just like Euripides play in some ways, And She Would Stand Like This is a lot about waiting for the hammer to fall, for the next bad news – it’s a snapshot of a bad time and how people do or don’t survive it – and an exploration of just why someone would want to continue when the outlook is so bleak. Unlike the original, this new play ends on a far more defiant, dare I say optimistic note. The fires of the city of Troy burning in the aftermath of war become a fire of an entirely different kind in this modern context. Given the general unrest in American cities right now, pitting citizens against authority, the ending takes on a meaning that I’m not entirely sure was the intent. But it’s interesting when the real world that enters with the audience helps color what they’re watching. The departures from the source material are often the strongest moments in this play. For the next rewrite, I’d encourage the writer to push further still. For now, it’s a solid first production.

The second half of set B exists in a world very much its own. MARK: Un-Gendered, Intra Black and Overtly Emotive by Lucy Lucas Valentine is all the things the title promises and then some. It is a very intense one-act presentation. What it’s about, precisely, is almost impossible to pin down. Valentine and the very versatile Suzanne Victoria Cross (switching from her nursing uniform in the previous play into all back with a very ominous look consuming her face) are delving into the psyche of a very troubled and confused soul. The show has warnings for: sexual assault, rape, child/familial abuse, emotional abuse, depression, PTSD and self harm (phew). It is described as “a self-marriage. A truth-telling, naming names validation session where the audience witnesses the breaking open of a human being, the gathering of the pieces, and the necessity of finding the right places to put them together again.” O…kay… I’ve got to be honest, I lost the thread on this one. The program tries to be helpful with a list of scenes but it’s often hard to really track where one scene ends and another begins. This, despite the fact that sometimes the actors would sit in the dark waiting for the next light cue to begin another scene. I don’t fault the tech person here. There’s nothing lost if a performer starts talking in order to cue the lights coming up – particularly in a piece such as Mark, where we’re delving in and out of the dark and the light anyway. The audience doesn’t need as many clean and tidy cues as you think they do. They’ll roll with it. It’s theater.

“It throbbed like my scars do, so I knew it was mine.”

Even though I had precious little idea what was going on a lot of the time, I was still captivated by the piece. The intensity of the actors’ performances and their commitment to the telling of the story went a long way to keeping me engaged. I did care about what was happening to Valentine’s character, Luci Ferr (yeah, that name had me a little confused at times) and wanted things to end well for her. I also kept a watchful eye on Cross’ character of the Entity to see if she was always as forbidding and untrustworthy as she seemed. Mark isn’t a conventional narrative by any stretch of the imagination – even if it does start in the dark and end in the light. Trying to make something like this fit into a standard framework isn’t the point, because that isn’t what it’s after. I’m not averse to being guided into some trance-like world. I certainly don’t want them to “dumb it down” into something “normal.” God forbid. I’d just like a little more guidance from the creators as to where they want to leave me when it’s over. What feeling, or even message, do they want me to take back out into the world after I spend time with them?

“We are fighting for our lives between versions of ourselves right now.”

The two plays of Set B in Q-Stage are a lot further along in their development, and have an extra helping of polish on the finished product, than the works in progress from Set A.

I came away impressed, if still a little puzzled. The final shape of these plays is coming into focus. I’ll be curious to see what these artists do next (both in these particular pieces, and elsewhere). Q-Stage – Set B – 4 stars – Highly Recommended