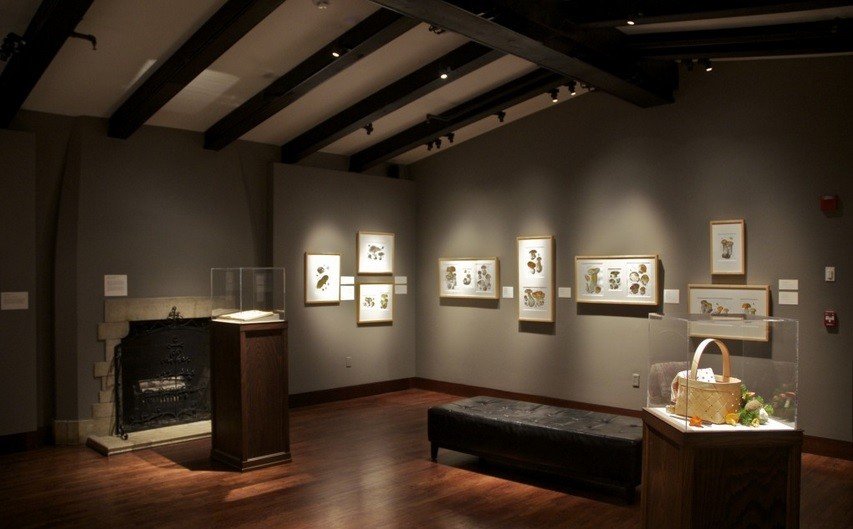 Minnesota’s forests helped to build the state we know today, but the forests we see today are far smaller than what used to exist.  In 1858, over half of Minnesota land was covered in deep shade from trees, and today only 17.3 million acres (out of 51.2 million acres of land) remains classified as forested by the Minnesota Department of Natural Resources.  At The Museum of Russian Art, the exhibit “Life on the Edge of the Forest: Russian Traditions in Wood” seeks to showcase another part of the world with a unique relationship to the woods.

According to one of many informative plaques in the exhibit, Russia possesses the largest area of forest in the world and exports the greatest amount of lumber in the world.  According to a report by the Program on Forests, an organization working with the World Bank to promote conservation of the world’s forests, Russia harbors 25 percent of all intact forests in the world.  The predominant forest tree species are the larch, pine, spruce, Siberian pine, oak, beech, birch, and aspen.  Conservation of forest biological diversity is referred to as a key principle of the forest legislation in the Russian Federation, and the exhibit notes that the area of forested land has not decreased in recent years because of the intensive reforestation and natural expansion.

When one stops to look at the impact forests have on the daily life of Russian citizens, this dedication to preservation is no surprise.  Forests have been important sources of shelter, food, medicine, and even clothing for hundreds of years – and according to the exhibit, the economic value of non-timber forest products is higher than that of harvested wood.  Perhaps the most fitting statement of the importance of the forest came from the exhibit’s mention of writer Leonid Leonov’s quote from his 1966 novel “The Russian Forest”.  Leonov said, “Perhaps no other element of Nature has set so strong a stamp upon the morals and manners of our ancestors.”

To present this powerful natural element as a dynamic presence, the exhibit showcases many art mediums that each reveal a different facet of the forest’s character and influence.  The layout of the exhibit could be seen as modular – united by the theme of the forest, each miniature section of the whole exhibit can also stand on its own due to the impressive quality of the workmanship.

Some of the most striking items are hand-carved wooden distaffs, known in Russian as prialka.  Some of the prialka are several feet high, and most are carved and painted with ornate designs.  They are arranged according to the region of their origin, and a few have visible names etched into their bases.  Used to hold unspun flax while women hand-spun yarn for linen, the prialka also have a base for the spinner to sit on in order to stabilize the structure.  Hand-woven and stitched textiles are also laid out to illustrate the delicacy of the fabric made from the yarn spun off the prialka.

Along the walls, nalichniki, or carved wooden window surrounds, hang heavily from the walls.  They capture attention because of their bright paint and the intricate scrolls, shapes, and symbolism worked into every frame.  According to the exhibit, the nalichniki were originally designed to protect precious glass windows from damage.  Craftsmen made the best nalichniki, which became status symbols in Russian towns and villages.  The display shown in the exhibit includes both simple and ornate nalichniki, and the level of artistry is striking.

One of the great gems of the exhibit is tucked into the Fireside Gallery next to the Main Gallery.  It contains a beautiful array of botanical watercolor art by Alexander Viazmensky, and the subjects of the paintings are different varieties of mushrooms.  The paintings are exceptionally beautiful, and painted with an attention to detail that is simply amazing.  In addition to providing beauty, the paintings are used to highlight how important mushrooms are to Russian society.  According to the exhibit, young children play with toys in the shape of safe mushrooms, which prepares them for family mushroom hunts.  Since Russia is a mycophilic society, meaning they are very fond of mushrooms, it seems fitting that paintings of this important food and medicine source would be part of the exhibit.

In addition to the botanical paintings, many images of deep woods and forested villages are featured in the Mezzanine Gallery.  These paintings by artists such as Aleksei Gritsai show the role of the forest in daily life, providing a pleasant set of illustrations that round off the exhibit.

The Museum of Russian Art: http://tmora.org/exhibition/life-on-the-edge/