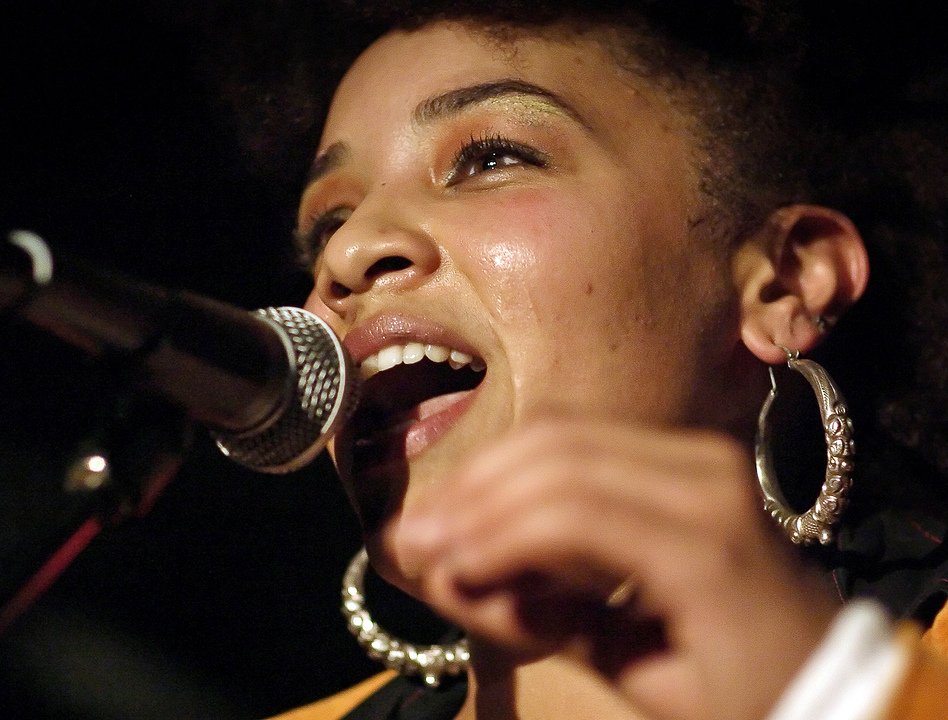 Using voice distortion, audio loops and images of dancing crotches, LaTasha N. Nevada Diggs grabbed my attention during her poetry performance at the Walker Art Center. The author of four chapbooks and one album, Diggs is a poet/writer, sound artist, vocalist, and performer. Before I sat in her audience, I didn’t know what to expect, and even now, I’m not sure how to describe the experience.

Diggs warmed up the audience by reading some poetry over a loop of her own lip trills. The sound was comforting, like a nice soup base. It highlighted her words as she read them through an audio distortion device that createed an echo to each syllable. The spooky cool effect made me listen closely, hanging on to each sound.

Then, Diggs added images to her reading. The first is a slowed down video montage of gyrating hips that undoubtedly belonged to Michael Jackson. We never saw his face, but that iconic bumping crotch and gloved hand revealed enough. “This was a charitable crotch,” read Diggs. In the background, a loop of Jackson’s shout during Smooth Criminal evoked a sense of familiarity. But, with every repetition, the shout became more and more grating — like a scream instead of a triumphant roar. The pop culture reference faded into a commentary on celebrity consumption.

The next image Diggs used pulled a groan from my belly. It was the black face and exaggerated lips of Mr. Popo from Dragon Ball Z, a caricature of racial insensitivity. In this poem, Mr. Popo and Jinx from Pokemon are on a date. Jinx also represented an unfortunate stereotype with her large lips and dark purple skin. “My dragonballz swing low for you proper,” Mr. Popo tells Jinx. She replied, “What the f*ck did they do to your lips?” The conversation elicited a laugh from the audience. Here, Diggs pointed out the ridiculousness of cliche animation while also using her trademark play with dialects, sounds and languages.

Partway through her performance, Diggs admitted she gets bored with her reading and likes to take breaks. She then lead the theater in a game of sounds. With the point of a finger and some fist bumps to her chest, Diggs orchestrated the audience in a harmony of noises that exemplifies how a group of strangers can create together and have fun. It was both delightful and a little weird, two qualities Diggs has in spades.