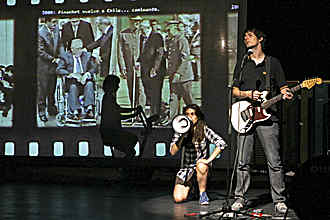 Written by Lola Arias, El Año En Que Nací (The Year I was Born) traces the lives of a group of performers and their parents through the last 30 years of Chile’s history. The performers were all born during the Pinochet dictatorship. Pinochet was known for extreme economic reforms that widened the gap between classes as well as for his strong military presence. As many as 3,200 people were killed by his regime, 80,000 were interned and 30,000 were tortured. The performers came from families on all sides of the political and economic spectrum.

Each performer told his family’s story through actual postcards, tape recordings and costumes. As one performer told his story, the others played supporting parts acting out – sometimes literally, sometimes from more of an expressionist approach – the family story being told. The performers did a great job with the multimedia approach. One performer did criminal sketches based on descriptions in real life. He used those skills in the show to illustrate his family’s story. It was like watching a Pictionary cartoonist scratch off the plot of a dark graphic novel. Another performer played guitar – it was a hard core garage sound that punctuated his story and others. A historical radio recording was used to trace several family reactions to a shared event.

It was interesting to learn more about Chile. It was even more interesting to hear universal themes running through each story and the tales of families entwined over political strife, similar I’m sure to stories you’d hear from families living in other unstable political environments. The personal stories included a mother who was killed as a terrorist, but went down shooting. A father who remained loyal to Pinochet for 17 years despite the fact that he was unemployed for 10 of them. One derived great pride when a Chilean woman was crowned Miss Universe. She watched on TV with her family gathered in her parents cozy bedroom in the United States. Several had parents who fled to countries around the world to escape persecution and risk. A father who ran away when his daughter was young. Rumor had him dying in several fashions but the truth she found out later was that he was in jail. Her family refused to talk to her because of her connection to the show and the retelling of their tale in public.

Between scenes the actors would try to put themselves on a spectrum – to compare political stance, economic ranking and even darkness of complexion. The dialogue among performers as they tried to gauge their liberalism or conservatism of their families to those around them brought out the nuances in the politics on the front lines. Who is poorer, the family with the dirt floor, the family in exile or the family on food stamps? It was fascinating to look at what each performer thought of their own situation compared to their colleagues and then to compare that to your own societal norms sitting in the audience.

It was an intriguing show. Also it was in Spanish with English subtitles, posted in a screen above the performers, similar to subtitles in an opera. So unless you understood Spanish, you had to pay attention. I liked that and I needed that. Not only is my Spanish rusty (and I learned Spanish in Catalonia so a very different dialect) but my knowledge of Chilean history was almost nonexistent before the show. I feel like a learned a lot –  again not just about Chile but about human nature and families during times of unrest.

El Año En Que Nací  was part of The Walker’s Out There 2014: New World Vision series.