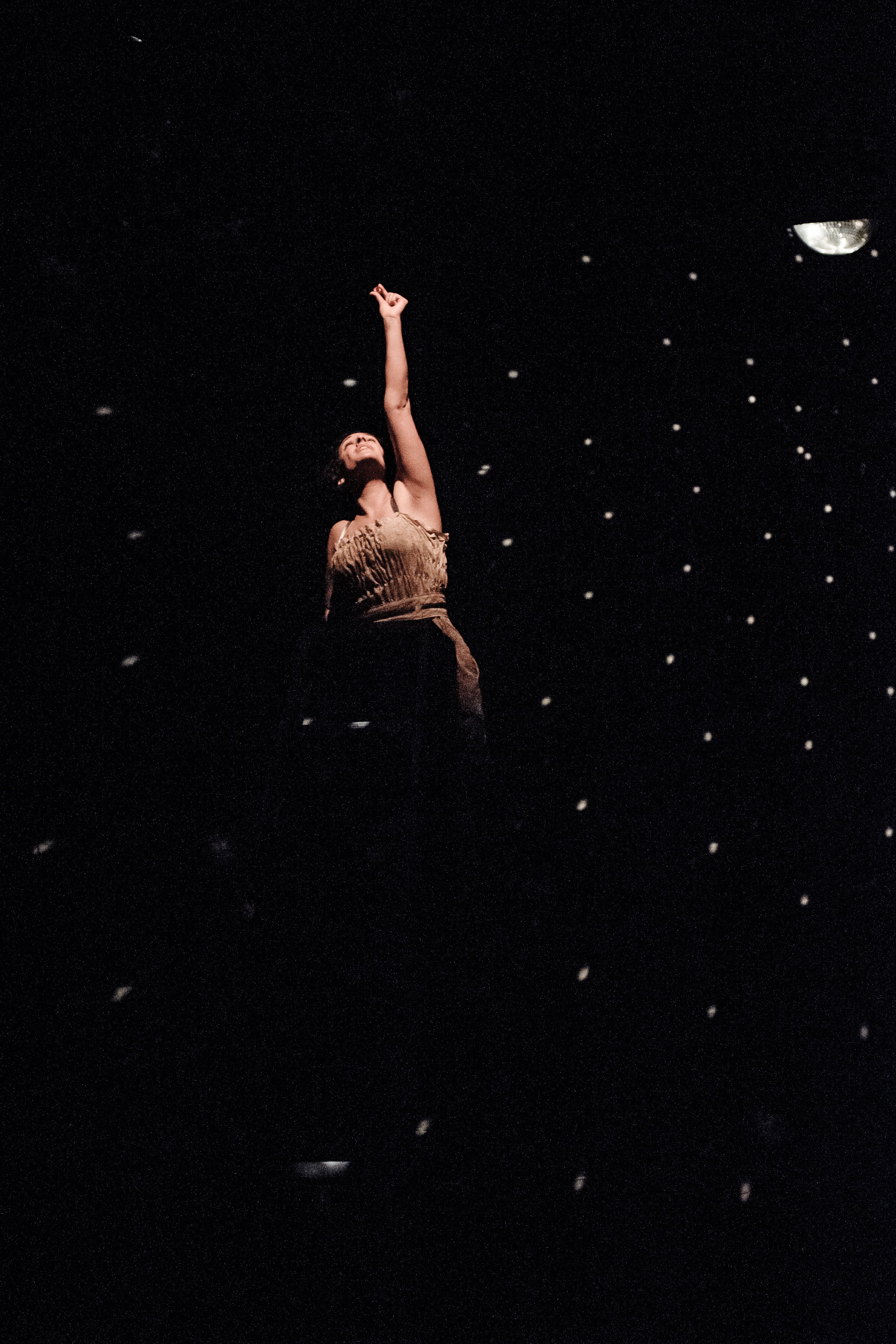 Elizabeth (Roneet Aliza Rahamim) reaches out to her mother in the stars in Swandive Theatre's production of Defying Gravity; photography by Joan Banick

Jane Anderson’s play Defying Gravity is NOT about the explosion of the space shuttle Challenger, and it IS about the explosion of the space shuttle Challenger. That, in a nutshell, is the problem. It feels like the playwright is trying to have it both ways. She doesn’t want to be bound by the literal facts of the disaster, but she wants to piggyback on all of its traumatic emotional resonance for an audience. The script and the production by Swandive Theatre (to my recollection) never mention the Challenger by name, but they also use images and audio from the 1986 mishap. To use a slightly more current and raw example, it’s as if someone created a piece of theater about a “generic terrorist attack” but confronted the audience with footage of the 9/11 attacks on the World Trade Center. While Defying Gravity doesn’t feel manipulative in a cynical way (the good intentions behind the storytelling feel genuine), it is, nonetheless, manipulative.

“Do you really see all those colors or are you making them up?”

Theater exists to get a response from its audience. Tugging heartstrings is not out of bounds. But there’s earned sentiment, and there’s unearned sentiment. We should care for the characters and their situation because we get to know them onstage. Anderson is practically daring us not to be moved. Look! Dead astronauts! One of them was a teacher! She had a family! This is a little girl who watched her mother die in a horrible explosion! Look!  Old people! Traveling the country in the golden years of their retirement! Honestly, writing a review about this production it feels like I’m kicking a puppy. How could I be so unfeeling? (Over and above the production itself, this is the first show in the inaugural year of the new ARTshare program that’s meant to reinvigorate the Southern Theater. I’m even a member of ARTshare. What is wrong with me?)

“We’re going to see the beginning of the universe.”

It’s not the fault of the production. Directors Damon Runnals & Meg DiSciorio have assembled a very able cast and they do their best with the material. My objections have to do with the play and the fact that it’s a mess. Which is baffling to me because Jane Anderson is not a bad playwright. I still recall being fascinated and moved by a local production of her play Looking For Normal (and I saw that almost six years ago now). I’ve also enjoyed her work in TV and film like How To Make An American Quilt, If These Walls Could Talk 2, and The Positively True Adventures of the Alleged Texas Cheerleader-Murdering Mom, all of which (as you might guess from the titles) couldn’t be more different from one another or Defying Gravity in terms of subject matter and approach. It’s not even that there aren’t beautiful bits and pieces scattered throughout the play. It’s just that all these potentially intriguing ideas are working at cross purposes to one another most of the time.

First of all, there’s a lot of talk of God and human beings’ place in the larger scheme of the universe (not that there’s anything wrong with that). There’s a strong vein running through the whole play that seems to be implying that God doesn’t want humans to climb too high—that man, essentially, wasn’t meant to fly. There’s a direct and interesting parallel drawn between the Tower of Babel and the space program. But there’s also a lot of stage time spent on discussing cathedrals, and how the ever increasing height of them was an attempt not just to outdo the last town that built a cathedral but also to reach a little higher and thus closer to God in heaven. Some characters say God is pointing the way into the stars and urging us upward, others say that maybe there’s something up there that God doesn’t want us to know. (And does this nameless teacher work in a parochial school? There’s an awful lot of discussion of the divine, specifically a Christian God, for her to be working in a public school. It seems more convenient for the author for the teacher to say these things than realism might permit.)

“There’s a larger plan out there that we can’t even see, let alone change.”

Expecting realism of a play that introduces Claude Monet right up front (who died in 1926) unstuck in time and wandering through late 20th century disasters probably isn’t a realistic expectation. But if you’re going for impressionism, or whimsy, or quite literal flights of fancy, divorced from pesky facts and history, then for the love of good playwriting, GO there. DO it. Don’t go halfway, and pull back and undercut yourself.

“I had the pleasure of watching 16 sunsets a day.”

America had disasters in the space program before (and after) Challenger. The reason Challenger hurt the national psyche so deeply is that we were all paying attention again. We were about to embark on a new era of space travel. For the very first time, a regular old civilian, a school teacher, was going to go up into space with the astronauts and while she was there she was going to broadcast lessons from space to kids back on earth. We were all going to be a little closer to traveling into space ourselves. Kids were going to see the real possibility of space exploration, the thrill of scientific discovery. And then “teacher in space” Christa McAuliffe blew up in an enormous fireball just a minute after lifting off. Her and the shuttle and everyone else on board. And we were all watching it happen, live on our TV screens. And they kept playing it seemingly in a loop hour after hour. I was in college at the time. The phrases “Roger, go at throttle up” and “Obviously a major malfunction” are seared into my memory. The whole shuttle program was put on hold for years while investigations and safety upgrades took place, and the notion of a civilian in space got put off for many years after that.

“I never meant to take your mother away from you.”

Defying Gravity almost does touch briefly on that sadness, the feeling that not only has something immediate been lost, but that we may have finally butted up against one of humanity’s limitations, a barrier we cannot get over or around no matter how determined or ingenious we may be. The retired couple (David Coral and Maggie Scanlan) despairs that they now will never make it into space. Monet (James Lekvin), too, feels that there are heights he will never reach, sights and colors he will never see. The little girl (Roneet Aliza Rahamim), having lost her mother, thinks of disaster as a new way of life, something that must occur regularly in the world, otherwise how could it have happened to her. The NASA technician (Bryan Grosso), in addition to blaming himself for the failure of the shuttle, worries that the Hubble telescope, due to be launched not long after the Challenger flight, may be permanently grounded. Even the technician’s friend the bartender (Lacey Anne Zeiler) seems to be having her fear of heights reinforced by the Challenger’s fall from the clouds. And of course, the teacher herself (Erin Roberts) all but disappears from the canvas of this story, the notion of teaching children from space now a seeming impossibility. Defying Gravity almost recreates that gravity that dragged down the American spirit in those early days of confusion and sadness right after the explosion.

“Some of the workers who died were buried in the walls of the cathedral. It was considered a great honor.”

But then the script kneecaps itself by tacking on not one, not two, not three, not four, but five completely unwarranted and unrealistic happy endings, touching each and every character, that come out of a left field so far offstage left that I’m not even sure where to begin (I should mention that even with all the endings, the play still clocks in at just about 90 minutes). The play was originally produced back in 1997, just a little over ten years after the disaster, so in some ways the wound, and general audience knowledge of Challenger would have still been relatively fresh. It was a shared foundation you could still bank on when telling your story. And the scenes of 20 years after Challenger, in 2006, which end the play, were still far in the audience’s future back when they first met Defying Gravity. Now that year is firmly in our own collective rearview mirrors. We’re almost 30 years on from Challenger now. A large chunk of any young-ish theater audience these days wasn’t even born when the Challenger disappeared from the skies. It’s as unconnected to their lives as stories of World War II or Vietnam or Watergate. So that’s how you test if a play is going to age well. If the Challenger incident isn’t a part of your mental memory bank, does the play still work on its own terms? Does it fully create its own world for you to enter, independent of any outside forces or knowledge? I’d have to argue that, unfortunately, Defying Gravity doesn’t.

“It’s a great time to be alive.”
“That’s a common misconception.”

Then there’s this weird thing about the racial makeup of the cast. Doing a little homework, I ran across the fact that the playwright in the character list specifically tags the role of the bartender as being an African American woman. Someone said to me the other day that since there were seven astronauts and seven cast members, maybe they were trying to mimic the racial makeup of the Challenger crew. Sure, there wasn’t an African American woman on the crew, but there was an African American man. But then, there was also an Asian American man, and neither the play nor the production includes that. It seems like, once more, Jane Anderson is trying to do a little cultural shorthand that I’m not entirely comfortable with. Zeiler does a fine job in that supporting role, Caucasian though she be, and you could argue that the loss of the role isn’t a great setback for African American actresses in town. Anderson seems to just want to use the notion of a black woman as someone sassy and sexy and capable of conversing about God without people thinking she’s a fundamentalist nut job. Because, you know, blacks are so much more comfortable with being spiritual and soulful than whites (seriously, Anderson?) It’s just one more weird clubfooted misstep in a series of stumbles that the text can’t seem to help making.

“There comes a time when you have to let them go.”’

Again, I feel like I’m kicking a puppy here. I want ARTshare to work, and the Southern Theater’s resurrection to work. I like some of the work that comes out of Swandive Theatre quite a lot. I even know a lot of the actors involved in this production personally, so I don’t like ragging on a show they’re in. If anyone was inclined to cut them all a break on this one, it would be me. But pretending a bad play isn’t a bad play doesn’t help anyone. As I said before, everyone does their level best to put a shine on this thing. But Defying Gravity just keeps pulling them down.