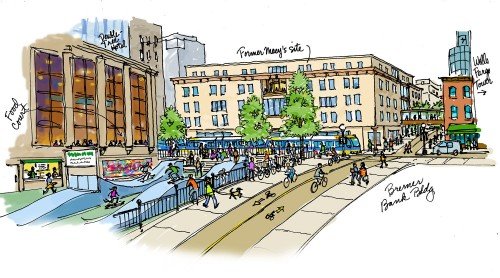 I live and work in Lowertown. Frequently my errands and wanderings take me up to the Rice Park/Landmark Center/7th Place areas. I’m always either on foot or bike. Over the last two-plus years of living here, I’ve become increasingly annoyed with the presence of the two “SuperBlocks”. These are the blocks that have 7th Street as the northern border, Wabasha Street as the western, 6th Street as the southern and Minnesota Street as the eastern border (See map). They house the Wells Fargo tower and the Bremer Bank tower on the north ends, facing 7th Street. The vacant Macy’s store and DoubleTree by Hilton face 6th Street on the south end. If you are coming from the mostly-pleasant 7th Street pedestrian mall and you want to go over to the eastern side of downtown, the most direct way is through the indoor “shopping” mall and skyway configuration of the SuperBlocks. 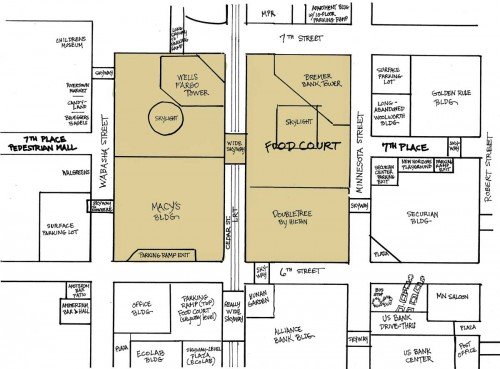 Walking through these spaces is a soul-killing experience. Entering the complex from the doors on Wabasha, you veer to the left following blank walls into the skylit atrium. But there are no stores, only vacant storefronts or soul-less institutional businesses and organizations. When it first opened about 25 years ago, there were high hopes that the retail stores, the dancing fountain, the food court and the carousel would bring people back into the ailing downtown. It was a suburban concept that was already out there in suburbia, so yeah, no surprise that it would become a massive failure as a point of interest. Now the fountain no longer dances, there’s maybe one small retail store, and the carousel has moved out long ago (and is now sitting pretty in Como Park). There is a sizable food court, but there’s life there for about 3 hours a day at lunchtime.

Exiting the easternmost SuperBlock onto Minnesota Street is the most soul-killing experience of all. Now you’re facing one of the dreariest corners in the nation– 7th Place and Minnesota– with the long abandoned derelict Woolworth store on one corner and the Securian building’s parking ramp exit on the other. I’m convinced we’ll never see any improvement here until the street, which would be 7th Place, is restored. This would allow the vitality of the Wabasha business area to spill down the hill to Minnesota Street and beyond. The SuperBlocks are a big, ugly obstruction standing in the way of a potentially livelier street life.

In my opinion, big shopping malls belong in suburbia, not downtown. I moved here to experience an urban life and that means more life at the street level. If you take a look at the map from around 1950, you can see what the SuperBlocks replaced. Lots of small businesses. Imagine how lively and interesting the streetscape was. Can we begin to restore some of that vitality by getting rid of mistakes made during the desperate decades of “urban renewal”? 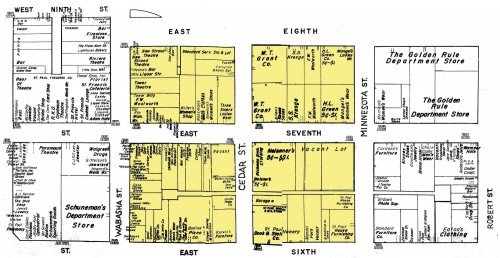 I’ve drawn up an idea, pictured here. The DoubleTree, Bremer tower and Wells Fargo tower could stay right where they are. We have the ice skaters across from Rice Park in the winter, how about skateboarders in a new plaza next to the DoubleTree during the warmer months? It would be nice to be able to buy a new shirt or pair of shoes downtown again, maybe at a store in the former Macy’s. I’d like to see small businesses lining the new 7th Place. And it would be a street for pedestrians and cyclists only, not private automobiles, much like Nicollet Mall (without the buses). Restoring 7th Place would go a long way to bringing vitality to the city.