Let’s talk some Yiddish. You start. Whaddaya got? “Oy vey?” “Schlep?” “Chutzpah” (or, as a certain shikse would have it, “choot spa”)? Don’t kid me, I know you got bupkes. This town swings goyish, which is maybe why you can’t get a decent knaidl around here: people hear the word “knaidl” and think it’s a Jewish joke that they don’t really get and probably isn’t that funny anyway. Dude, it’s a matzoh ball. Please tell me you know what a matzoh ball is.

If Minnesotans don’t get Jewish humor after twenty years of Seinfeld, then forget about it. Jewish food, on the other hand, is a nice, moderately ethnic cuisine that everybody gets. Bagel? Of course. Corned beef on rye? Sure. Blintzes? Probably. We’re talking about Eastern European and German Ashkenazi immigrant food. What’s not to like? So why, in a town that goes wild for ethnic food from all over the world, do we have like maybe three Jewish delis? 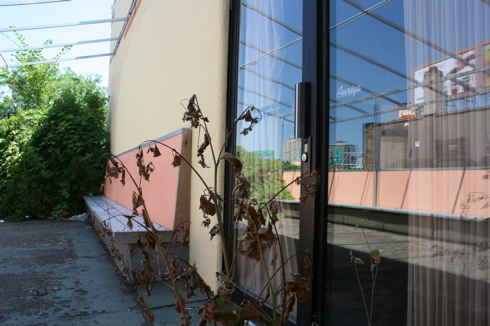 I don’t want to put the evil eye on it by hoping too much (ptoo ptoo ptoo, kenahora), but the old Auriga space on Hennepin in Lowry Hill, if all goes well, is about to be occupied by the deli of our dreams. No, you won’t think you’re in New York or even West Palm, but that’s not what they’re aiming for. Veteran chef Tobie Nidetz and first-time restaurateur David Weinstein are coming up with a menu that draws from a range in inspiration from Mile End in Brooklyn to Tobie’s aunt Bess in Chicago. I spoke with Tobie and David, just to kibitz a little. 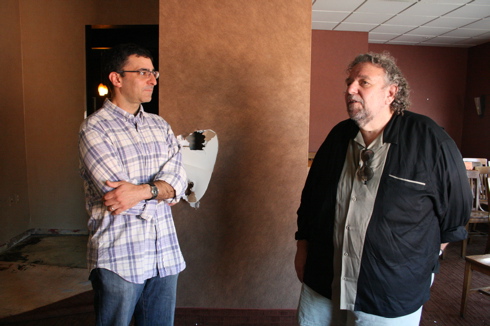 LL: So, everyone says this is going to be a Montreal-style deli.

Tobie: Yeah, no. We mentioned awhile back that we were going to have smoked meats like at Schwartz’s in Montreal, but that’s pretty much the only Montreal reference. What we’re doing is developing a Twin Cities-style deli. You know how each city has its own flavor, like New York, L.A., Toronto? Well, we’re combining local ingredients with traditional deli foods to come up with something unique to this area.

LL: David, you’re a real estate lawyer, and now you’re getting into the restaurant biz. Do people think you’ve stopped taking your meds, or what?

David: Well, I guess my friends and family think it’s a little, shall we say, unexpected. They’re excited about it, though. My kids want the school bus to drop them off there once it opens, so they can hang out.

LL: What inspired you to take this unexpected turn?

David: I live near here, and I’ve been looking at this abandoned space for the past four years. I kept thinking, wouldn’t it be great to have a place to go for coffee in the morning and to stop for a drink on the way home? So I got the idea to approach Tobie with a proposal. (LL’s note: that is the very definition of “chutzpah.”) I was taking a cooking class from him at Kitchen Window, and he seemed like he might be receptive.

LL: A cooking class, eh? So, not your typical nudnik attorney.

LL: You’re not from around here, are you?

David: I grew up in Connecticut. I like all kinds of foods, but I did start to think that we could have better deli food in the Twin Cities. I really like bagels.

Tobie: David came to me with this proposal last October, and then he started working on the business plan. Mostly I work with people who are already in the restaurant business. David’s the first non-restaurant person I’ve worked with.

LL: How does that work, then? Who does what?

Tobie: It starts with a menu proposal. The first menu I proposed was a blend of New York, Chicago, and L.A., and then David mentioned Schwartz’s in Montreal. I traveled around to sample various delis, and I went to Brooklyn to check out Mile End, a genuine Montreal-style deli. At Mile End, everything is cured, smoked or pickled in house. That kicked me into “make it yourself” mode. 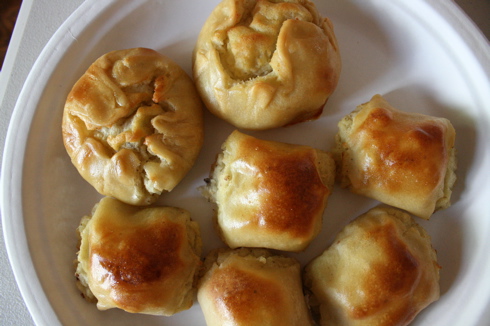 LL: By the way…I can’t help but notice that you have a couple plates of rugelach and knishes sitting there...

Tobie: Yes, of course! I’m trying out some recipes. One of these has sour cream in the dough; the other has bigger chunks of walnuts and raisins. What do you think?

Tobie: The knish dough is my mom’s recipe.

LL: Did you learn to cook from your mom?

Tobie: No…well…my parents owned four bars in Chicago. I started working at the bars when I was 14. We lived in an Italian neighborhood, so we ate lots of Italian. My mom was an interior designer, then she worked for the school system, and then she ran one of the bars. Both my parents cooked, but it was a little sporadic. Like, sometimes my dad would come home with a case of lobster, and then we’d have lobster. Other times we didn’t have much to speak of. My dad’s mom was a brilliant cook. My aunt Bess made gefilte fish and chicken soup — I’ll definitely use her recipes. My mom made a great tsimmes with carrots, sweet potatoes, and prunes.

LL: So how did you learn to cook, like, officially?

Tobie: Way back when, I had an apprenticeship with an incredible chef named John Snowden in Glenview, Illinois. His school was called Dumas Pere L`Ecole de la Cuisine Francaise. He was an African-American who was classically trained in France, and when he came back to the U.S., he couldn’t find a job as a chef–the only jobs he could get were on the railroad. So he started his own underground restaurants. This was way before “pop-up” restaurants were trendy. (LL’s note: If you google John Snowden, you get lots of chefs referring to their apprenticeships with him. Judging from their comments, he made Julia Child look like a rank amateur. But besides one out-of-print book, I couldn’t find a single bio or history of this iconic figure. Could somebody get right on that, please?) 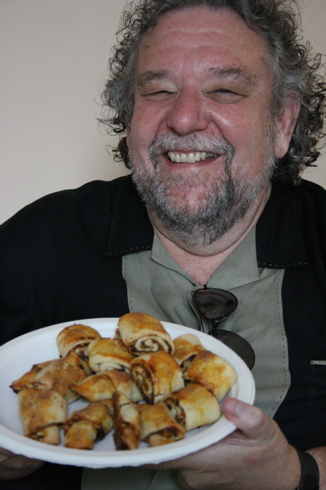 LL: What’s on your deli menu so far?

Tobie: Let’s see. Breakfast, you might want lox and bagels. We’re going to make our own bagels, and I’m thinking we might make our own lox. We’ll definitely smoke the whitefish that we’re getting from the North Shore. I might do a kasha porridge. How about this for a breakfast sandwich: a bialy with crisped smoked meat, egg and cheese.

At lunch, the carving station will be open: brisket, smoked meat, corned beef, local turkey. We’ll get a lot from Grass Run Farms, but we can’t get everything–they can’t supply brisket in the amounts we need. For steaks we’re looking for environmentally sustainable feed lots because we can’t find the kind of grass-fed steak in the quality I’d like to see.

LL: Really? The steaks I’ve had from Grass Run are tasty.

LL: Huh? You mean the steaks haven’t been sitting around long enough, or the cows are too young?

Tobie: The cows. Around here they slaughter them at three years old. They’d have to be five years old to have the kind of marbling and yellow fat that you get in grass-fed European cows.

Tobie: Then dinner will be our biggest meal of the day, both sit-down and for people grabbing take-out on their way home. 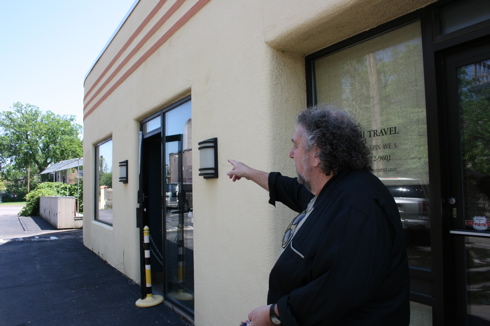 LL: As you know, the new Blue Plate restaurant, The Lowry, is opening this fall, too, just down the street. How are you similar to and different from them?

Tobie: The uniqueness of the food is the main differentiator. They’re a lot bigger; we’ll do take-out and they won’t. The clientele will probably be pretty similar. Both good restaurants.

LL: Who’s your clientele? Bubbe and Zayda, kids, everybody?

Tobie: Everyone will feel comfortable here. The atmosphere is going to be earthy, homey, lived-in. We’re avoiding elements that look “design-y.” But we’re particularly targeting millennials. The music will change throughout the day, getting a little edgier at night.

LL: So you’ll be trolling Liquor Lyle’s for customers?

LL: How did you come up with the name “Rye Delicatessen and Bar”?

David: Well, it’s simple, clear, and we thought it would be memorable. Rye is the quintessential deli bread. Plus there’s the association with rye whiskey, which is a nice association, since we’re having a full bar.

David: Chip off the old block. 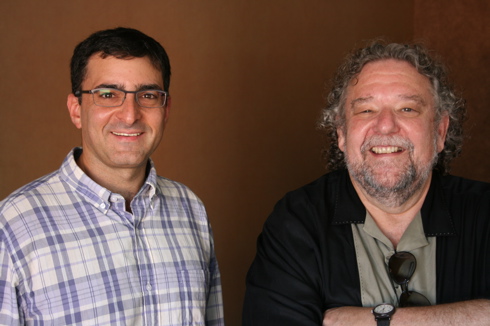