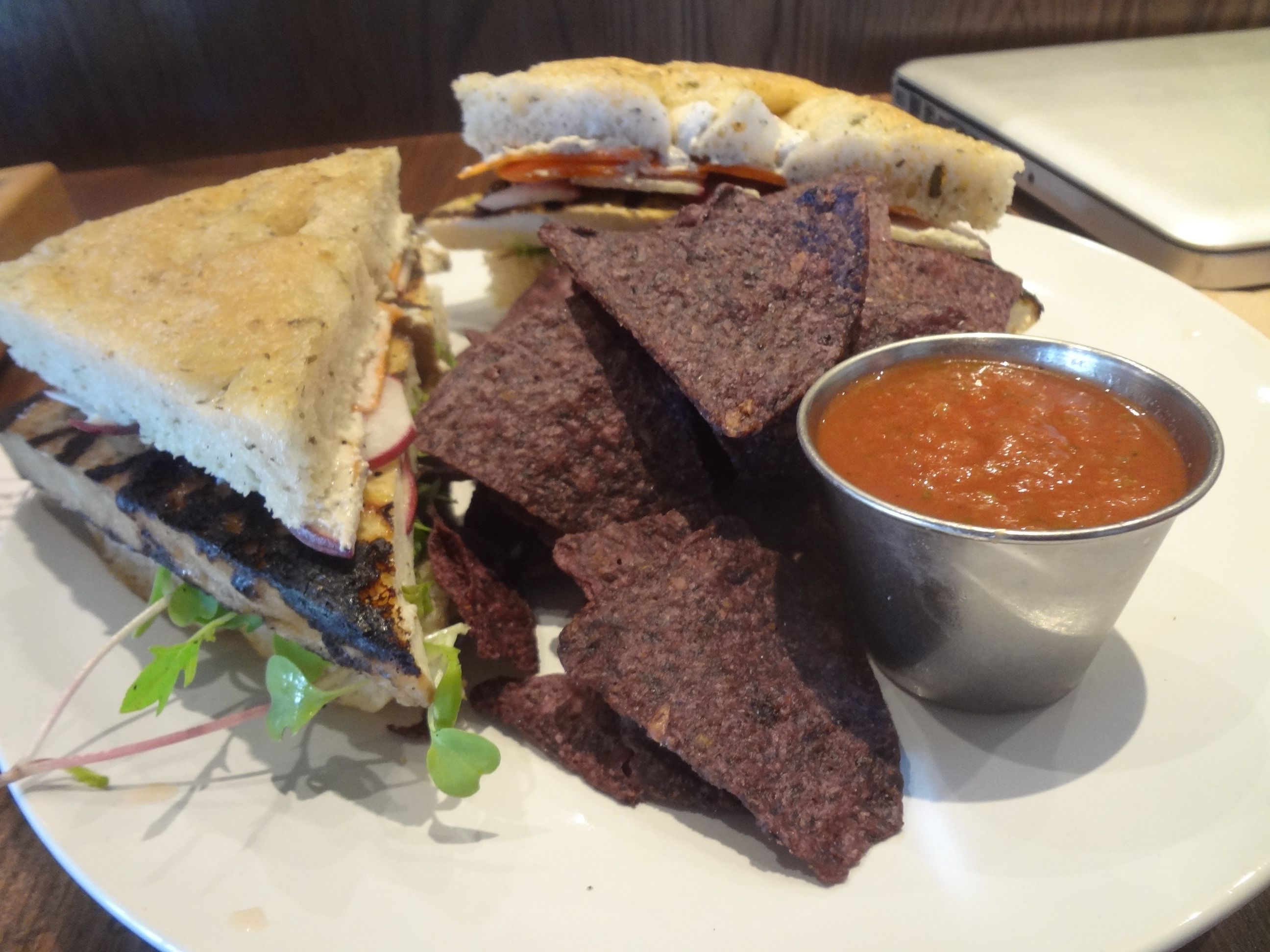 Got any suggestions for healthy, low-fat, low-carb dining?

I have always wanted to lose weight – say, about 20 pounds – but I have never been successful at it.

This time is going to be different.

I’m not following a diet, really, but I have started eating less fat, fewer refined carbohydrates, and a lot less meat and cheese. But I am not being fanatical about it – there’s still room for an occasional splurge.  I’m also biking instead of driving, whenever that’s a practical option.

I am only a week into this new way of eating, but it feels like it is starting to make a difference.

The arguments for changing my diet have accumulated over the years, along with my various middle-aged aches and pains. Recently, an orthopedist told me that my joints would be happier if I lost 20 pounds or so.

Watching the movie, “Forks over Knives” was another influence – it makes a pretty convincing case that people who eat a mostly vegetarian diet live longer, healthier lives. (Available on Netflix.)

And then there are all the ethical and environmental arguments in favor of a plant-centered diet.

But the tipping point for me came a couple of weeks ago, when I saw my friend Jerry for the first time in months. He made some of those healthy changes in his diet, and lost 20 pounds. He looked great, and he said he felt like a new man.

A few days later, I saw another friend, Krishna, who had a heart attack earlier this summer. He too, changed his diet, and had lost 12 pounds in a couple of months.

Then I read a story about Bill Clinton, who became a vegan after quadruple bypass surgery – and has lost 30 pounds. “I just decided that I was the high-risk person, and I didn’t want to fool with this anymore…” Clinton said in a profile in AARP magazine. “So I decided to pick the diet that I thought would maximize my chances of long-term survival.”

Making the change at home has been pretty easy, and made easier by having a supportive partner. I switched from low-fat to no-fat yogurt, and I have cut back on the bread and pasta. I also switched from white flour to whole grain bread, and I cut out most of the sweets. When I need a snack, I reach for a piece of fruit.

But the real challenge has been to stick to the plan while dining out. Most of my favorite restaurants don’t offer a lot of choices that cater to this way of eating, and even when they do, it’s hard to resist the less healthy but more tasty options.

So I’ve started seeking out restaurants where my desire to eat a healthier diet would get more support – and fewer temptations to stray – and here are the first three that I have tried. 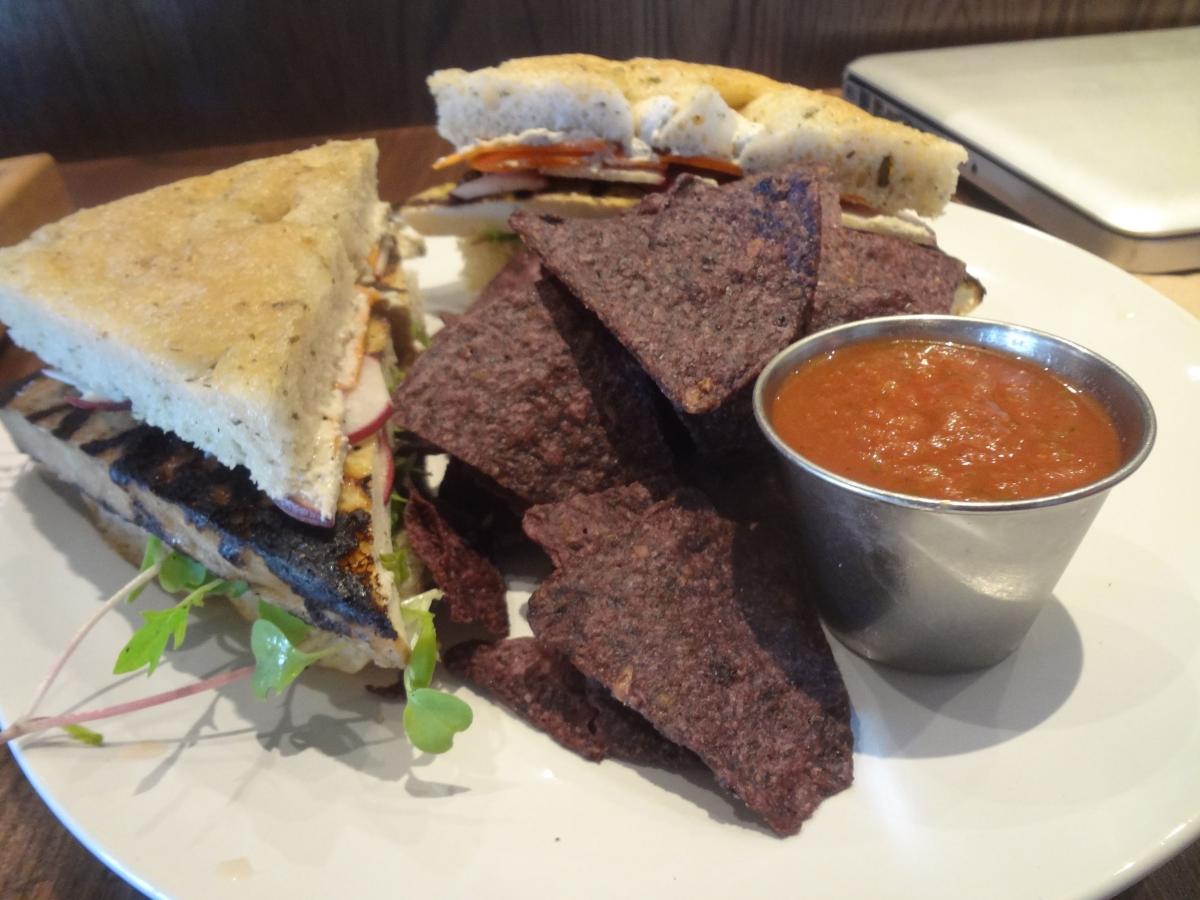 Verdant Tea  is a new tea house and tasting room in the former Koyi Sushi space at in south Minneapolis. It’s more of a tea house and tea store than a restaurant, but the shop shares space with a couple of other businesses, including Sweet Science Ice Cream, The Real Deal Chocolate, and the Birchwood Cafe, which operates an off-site kitchen in the building. The ice cream and chocolate are for sale at the tea house, which offers a very limited menu of food items “curated” by the Birchwood. I ordered the tofu sandwich with some trepidation, anticipating something rather bland and dainty, but was pleasantly surprised – this was hearty, fresh and very tasty.

The menu may be limited, but there are lots of other reasons to check out Verdant Tea. They offer a big selection of specialty teas with names like Master Han’s Wild-Picked 2013 Yabao, or  Qianjiazhai Old Growth 2012 Sheng, imported from small family farms in China, which you can buy by the cup or by the ounce, or sample in a tea tasting flight (four cups for $4). Check their website or Facebook page for special tastings and early morning meditation and Qi’gong sessions. 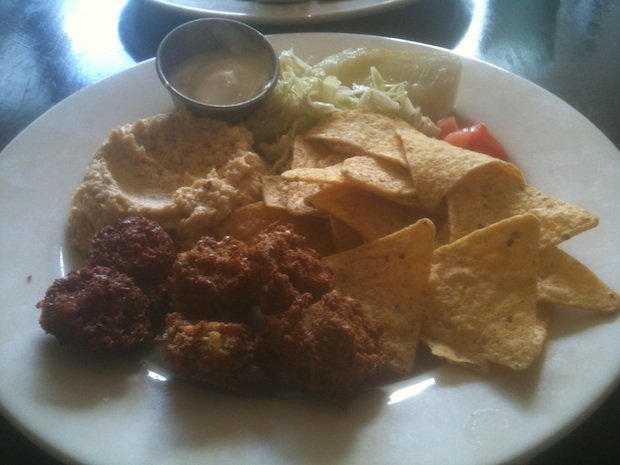 I first became a fan of Foxy Falafel when I discovered their stall at the Kingfield Farmer’s Market, where you could make your own eco-friendly pedal-powered smoothies on a contraption consisting of a bike connected to a blender. Now they’ve opened their own bricks and mortar storefront, at 791 Raymond Ave. St. Paul, and bought a food truck, which can be found in downtown Minneapolis on Tuesdays through Fridays, and at the Kingfield Market on Sundays.

The menu is pretty short – three kinds of falafel, three kinds of meat (chicken gyros, turkey shawarma and lamb burger), presented three different ways – sandwich, salad or platter –  which works out to 18 different combinations. I opted for the stoplight platter, which includes a sampling of all the traditional, curry and beet-flavored falafels, plus chips, hummus and a garnish of cabbage, cucumbers and tomatoes. Again, fresh and lively and very, well, healthy tasting. 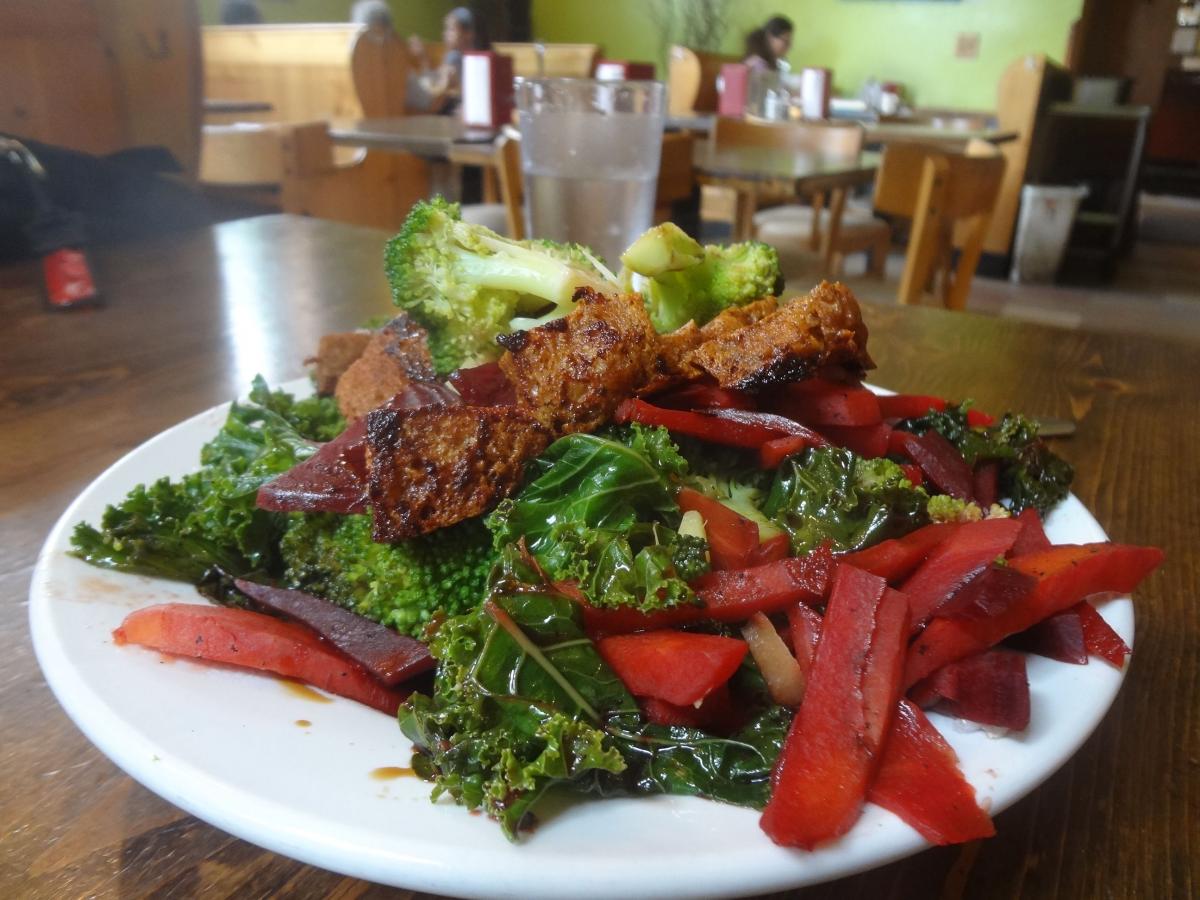 Radical Roots stir-fry at the Seward Cafe, 2129 E. Franklin (just down the street from Verdant Tea.)

My favorite dish at this worker managed collective is the Super Red Earth breakfast, a scramble of eggs, hashbrowns and onions, topped with ranchero sauce and lots of melted cheese, but that doesn’t exactly fit the new low-fat, low carb eating plan. So on a recent lunchtime visit I opted instead for the Radical Roots stir-fry: organic tofu (or tempeh) stir-fried with broccoli, carrots, beets, ginger and kale served on a bed of brown rice  ($7.25). Doctored with a little organic soy sauce, it wasn’t half bad.

So far, so good, but I’m looking for more restaurants that offer tasty, healthy, plant-centered dining options. Got any suggestions?