Long ago, most Americans lived as Laura Ingalls Wilder chronicled in the “Little House” series. Pa Ingalls and family were out in the wilderness, surviving with the rhythm of the land and putting away what they could to survive long winters and perhaps beyond. The family’s net worth was what they had around them – nearly all put toward surviving on their own.

That life has been replaced with interdependence based on a dollar value assigned to absolutely everything. We all get by with any extra scratch, should there be some, not stored up to get through the winter but properly invested in convertible assets. This means that everyone is subject to the values of the Free Market™, which determines the value of all assets including experience, talent, and work.

The real lessons from successful financial companies like Bain Capital are the demonstration of what these values of interdependence are – and how our world far beyond Pa Ingalls has become as hostile as any winter on the Great Plains. 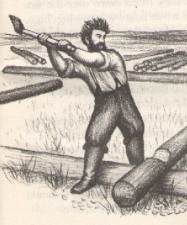 Out on the late 19th Century frontier what it took to survive was something a bit more than hard work and a diverse collection of skills. It was essential to build up resiliency, a store of food and fuel and just enough gunpowder to hunt for fresh meat. The exact amounts were determined by the seasons and the nature of the land itself, and reading the signs given by the land was a critical skill.

Life in cities at that time was essentially not that different, though it depended on the vagaries of social interaction more than the cycle of seasons. Big companies kept a few months’ payroll on hand in cash and tried to be self-insuring, taking a very long view of their development, image, and relationships with customers and suppliers. Shocks might come through the market but big industrial firms were reliable, steady institutions. This concept remained more or less intact as long as the USofA was a manufacturing nation.

This all changed around 1980 as cheap capital made stores of supplies or money salted away to get through the rhythms of life look very expensive. It seems contradictory, but the concept is critical. And that brings us to companies like Bain Capital.

When capital becomes cheap through a concerted “Supply Side” effort that includes subsidy and socialized risk, a funny thing happens to stagnant “working capital” salted away to cover the ups and downs of the market – it starts to look just like ordinary cash flow. It makes companies that have a lot on hand look “troubled”, at least in the sense that they are not leveraging their assets with Other People’s Money (OPM) to the maximum possible return. I couldn’t say it any better than this:

“Troubled” companies have a particular meaning on Wall Street. Sure, sometimes they refer to companies that are just muddled, have over-expanded, and are badly managed. But more often, what they are talking about is companies that do not seem to providing a large enough return to shareholders—a stagnating stock price in particular. But that does not mean a company is “troubled.” It can be quite profitable, have productive and loyal employees, have satisfied customers, and cash on hand.

What players like Bain do is enforce a Wall Street preference. There is a bias against companies that seek a “quiet life.” They are shunned by institutional investors, which depresses stock prices and makes these companies “troubled” in the first place. It isn’t that they are not profitable, but rather than institutional investors don’t like them, and as a result they trade at dramatically lower P/E ratios. Indeed, it isn’t even clear that takeover targets do have weaker stock performance if you look at total returns, including dividends.

This is how resiliency, or the ability to survive ups and downs independent of the vagaries of capital markets, becomes the ultimate casualty of “Supply Side” policies geared towards developing cheap money. And interestingly, one of the great champions of this system and its queer values of high dependence on an international finance system has the endorsement of a major party to become our President. His record is outlined very well in this piece from Bloomberg:

What’s clear from a review of the public record during his management of the private-equity firm Bain Capital from 1985 to 1999 is that Romney was fabulously successful in generating high returns for its investors. He did so, in large part, through heavy use of tax-deductible debt, usually to finance outsized dividends for the firm’s partners and investors. When some of the investments went bad, workers and creditors felt most of the pain. Romney privatized the gains and socialized the losses.

Like any social agreement, the economy we have is subject to beliefs, fashion, and political philosophy. The current system we all operate under is fueled by easy debt developed by low capital gains rates, under-regulated banking, and a general belief that idle assets are wasted assets. But these are not the same values that made the nation we live in. These are not the values of people like Pa Ingalls, who valued independence and resiliency.

What we are ruled by are values that make us dependent on each other, all around the world, far more than we could ever imagine. The storms that cross the oceans to challenge our survival are not biting cold or sweltering drought, but man-made disasters created by people with values that we often understand less than the rhythms of nature herself.

This system is one we created. We made it happen by making people like Mitt Romney fabulously wealthy for destroying the values that created our nation, thus creating even more people operating his way. The irony that he is running as a Republican and an advocate of “conservative values” that include personal liberty requires a very deep cynicism to appreciate fully.

Pa Ingalls, for his part, would almost certainly be appalled. And that’s worth thinking about.