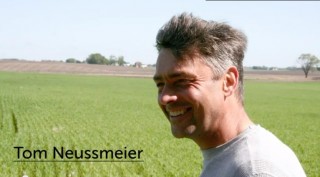 In our final “Climate change, agriculture and resilience” video—the series we’ve been publishing all week in the lead up to the MOSES Organic Farming conference—it’s all about being different.

Farmer Tom Nuessmeier, from La Sueur, Minnesota, is different. His 200-acre organic farm—producing farrow-to-finish hogs, corn, soy, oats, winter grains and alfalfa—is pretty uncommon in its diversity and size, especially today. As the average size of farms has grown, the number of farms has decreased overall, and so has the variety of crops. According to USDA data highlighted in the video, while corn acres have increased 62 percent, hay and oat acres have decreased 15 and 92 (!) percent respectively in the past 50 years.

This loss of diversity, though, makes sense as markets and policy have developed to encourage monocropping (namely, corn and soy). As Tom puts it:

The market tells people, and the insurance setups dictate to a degree, that that’s what you’re going to do if you want to go after the greatest profit. But I think it’s kind of a short-term way of looking at things that does have long-term implications if you’re talking about just maintaining the farm’s ability to be resilient.

Watch the video, or take a look at the first four of our “Climate change, agriculture and resilience” videos: