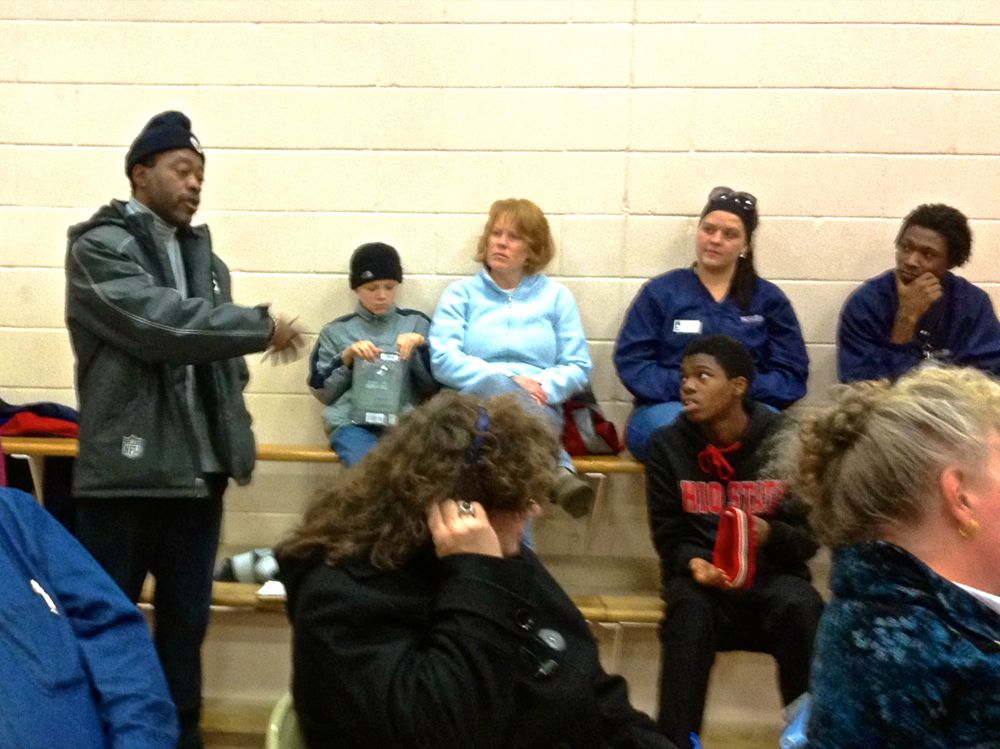 More than 150 east side residents turned out to support existing programs at Conway Recreation Center. (Photos by Lisa Steinmann)

The Conway Recreation Center gymnasium was filled Monday evening (November 25) with over a hundred and fifty east side residents who turned out to express their opinions on a plan to lease the building to a private organization.

The meeting was conducted by District 1 Community Council president Greg Beaumont who opened the meeting by announcing an update, “The city has agreed to a six-month period where privatization is put on hold so we can get a community group together to discuss what Conway needs to be for the neighborhood.”

That announcement was welcome news to community members who spoke up at the meeting about the lack of communication from the city. One member of the audience said, “I don’t understand what’s going on…That’s why I’m here now. To get information–I didn’t get no letter in the mail telling me that the rec center is changing.” Betsy Leach, executive director for District 1 Community Council reported that the meeting had been called “after we accidentally found out that Conway was slated for privatization.” The rumor was confirmed in October by the mayor’s office. Conway is the latest city rec center to be faced with changes brought on by declining city budgets.

In 2010, the mayor presented a system plan that outlined changes for the entire parks and recreation system, saving money by streamlining resources and adapting programs to changing times. In the plan, Conway Rec Center is identified as a good candidate for “partner building,” bringing in a private tenant to operate and maintain the building. Leach says, “We responded by saying that we disagree with the summary.”

Since the report came out and with no timeline for suggested changes, Conway has continued to be a busy rec center characterized by grassroots programming run by staff and many long-time volunteers. It features the city’s second largest football program, judo, basketball and cheerleading, an ice rink, community gardens and a popular senior program. Community leaders have kept a wary eye on changes to other recreation sites such as nearby Eastview Rec Center which is now partnered with Brunette Boxing and Twin City Barbell.

In early October, a park employee mentioned that the Tony Sanneh Foundation soccer program was preparing to move in to the Conway building. This came as a surprise to the District 1 Council and Leach who is emphatic in describing the communication gap, “The city never came to the neighborhood to say this privatization was under consideration.”

Leach spent October and November doing outreach in the community, informing residents of the imminent change, before scheduling the meeting with city officials. A flurry of emails were exchanged between community members and city officials. The result was an agreement to hold off on changes for six months (beginning January 1) and to come up with a process to involve neighbors in decision-making for Conway starting with the meeting Monday evening. 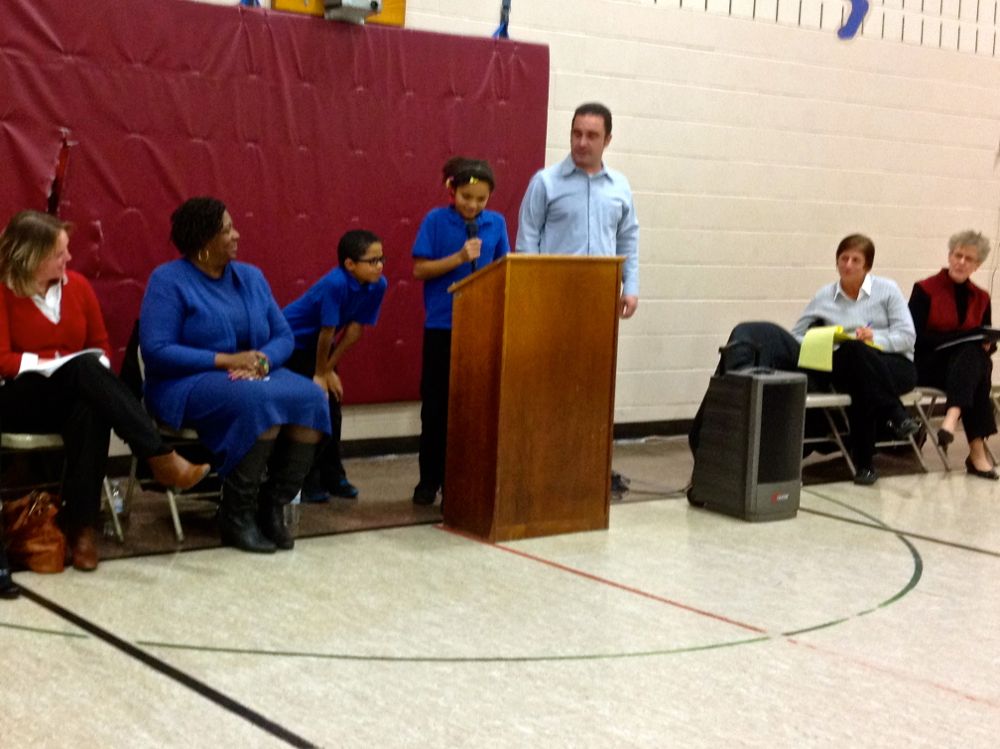 Children spoke out on behalf of recreation programs they want to see continue.

The first hour of the meeting was devoted to questions and comments from the audience. The city representatives listened until the end when they responded to the general themes raised. District 1 Council members read short lists of questions. Stacy Van Patton, treasurer, asked “What is the evidence that this privatization works?” Erica Martin, vice president, questioned the shift in funding from public to private and commented, “ the neighborhood focus of city services make Saint Paul a special and good place to live.”

Brad Griffith, an east side realtor, spoke against potentially closing the recreation center, “Rec centers are extremely important, one of the neighborhood assets that actually does add value to somebody’s home. I hope the city reevaluates its position on neighborhood rec centers.”

A coordinator for the community gardens, Garden of Edem, expressed concern that they might lose their 18 plots, “I want to know exactly how privatizing the center will affect us?” Members of the audience representing other Conway programs stood up to ask how they would be affected: judo classes, cheerleading, football, art class for seniors, assistance with tax preparation, etc.

Sandy Rosbacka, District 1 Council member (Eastview neighborhood) pointed out that, ”The Eastview Rec Center privitization didn’t work. They failed. Big disappointment–no programs for youth, no playground supervision and lots of problems.” She said she is not optimistic about the future of Conway.

One member summed up her feelings by saying, “Basically, we want to keep it as it is. Don’t take it away. Don’t change it.” Another said, “I get it–it’s a tough economy. But people want to be involved. There’s opportunity here. Our leadership is not fighting for our rec centers–but selling them and giving them away.”

Councilmember Lantry spoke to the crowd’s concerns. She pointed to her deep roots in the community and, while admitting that there was no time to answer all the questions, she understood the anxiety about the unknown. She reassured the crowd that the programs they want will not go away, “It’s not an either/or proposition.” She focused on the process to gather input, “This is the beginning, not the end.” 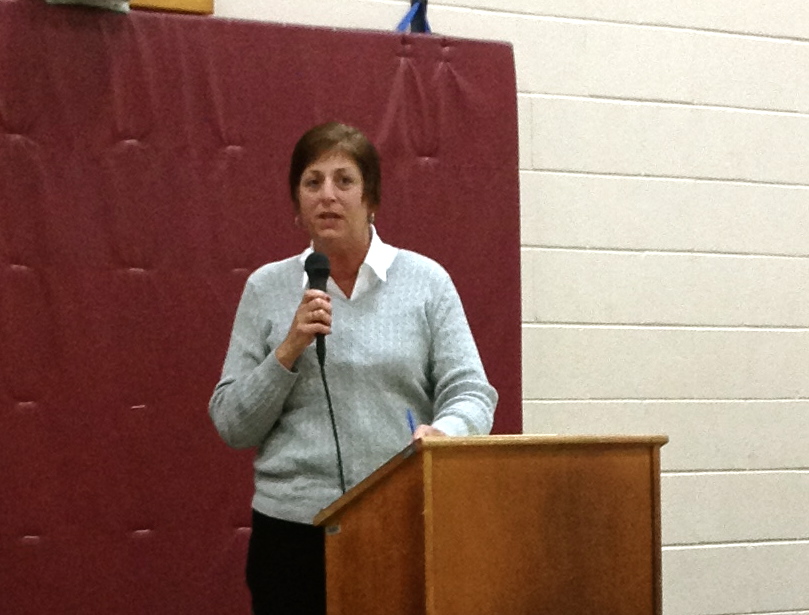 Parks and Recreation Director Mike Hahm reiterated how it wasn’t possible to address every question that had been asked but that “service partnerships” were an opportunity to build on and improve existing programs. The meeting ended after his closing remark, “What I’ve heard is a very strong challenge to make certain that we’re engaged, listen and respond, that we use the gift of time that we’ve been given, these six months, to come up with something we can be proud of.” 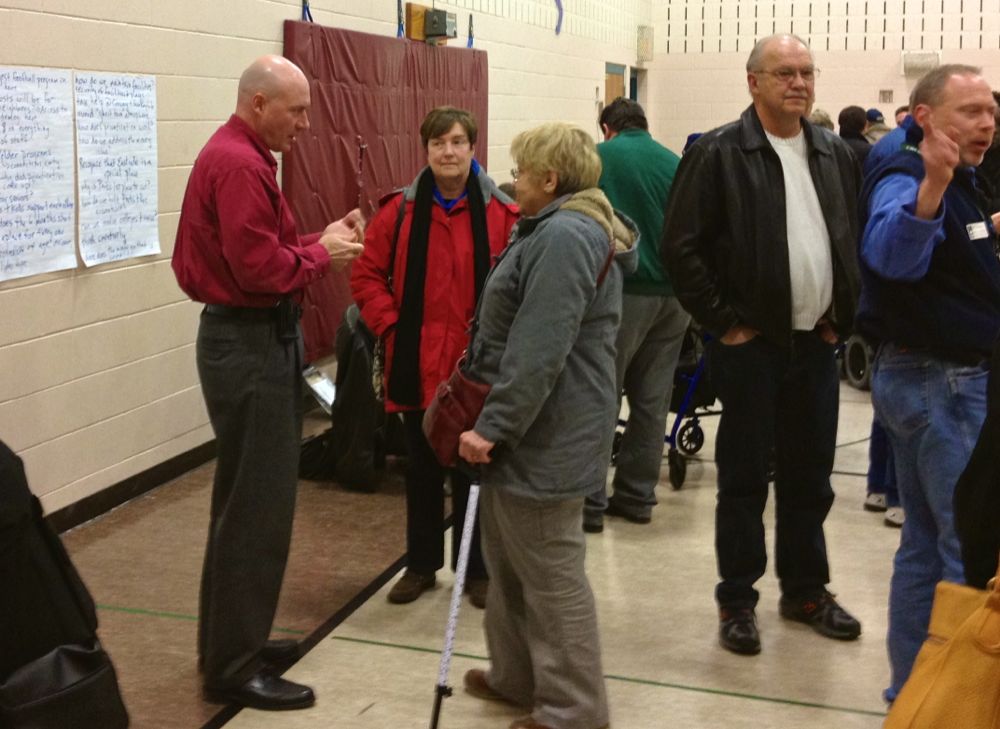 Leach reminded the crowd that they need to stay involved and next steps included leaving an email address, staying connected by E-democracy (and District 1), the District 1 Blog, ListServ, Twitter, Facebook or stopping by the District 1 office at SunRay Shopping Center (2105 1/2 Old Hudson Road, 651.578.7600).

Jayne Lallier, who attended the meeting, commented afterwards, “The city staff and Councilmember Kathy Lantry politely listened to the comments by my neighbors but gave no answers to the questions asked.” Lallier said she felt disappointed and expected specific answers to questions such as, “when and how was the decision made? What will the staff look like ? Will programs change with the partner? Why is the east side targeted for the change? Will the cost to participate change? Who will be in charge?”

Marcia LaDay-Provenzano, a parent and neighborhood school bus diver, commented “I don’t think they realize how important this rec center is to the community.”