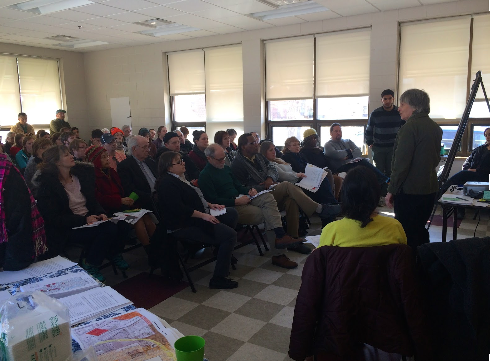 Residents and City Council members gather at the East Phillips Community center to discuss alternative uses for the Roof Depot in the East Phillips neighborhood. The Roof Depot has been a controversial site where City officials propose building a water yard in an already over industrialized, residential area.

MINNEAPOLIS: In January, 2015, The City of Minneapolis inquired on a plot of land located between The City Hiawatha Public Works facility and Smith Foundry in the South Minneapolis neighborhood of East Phillips. It’s owned by Roof Depot Inc., a company which manufactures shingles and other residential and commercial roofing materials, as well as a private month-to-month storage facility for residential use in a warehouse layout.It’s being vetted by the City of Minneapolis for development as a water yard and road maintenance facility for everything from fixing potholes to fire hydrants all across the city, repositioning 90 employees and their maintenance vehicles to the neighborhood.The asking price? Seven million dollars.

Thats where José Luis Villaseñor and the East Phillips Environmental Justice Committee comes in. They said they have had enough.

José Luis is the Executive Director of Tamales y Bicicletas, an organization that works to raise awareness about the Indigenous cultural roots, underlying in many of today’s “green” efforts.

Tamales y Bicicletas were joined by nearly 75 other community members, city officials, and council members at the East Phillips Community Center to compare notes and ideas as to how to approach yet another industrial plan in their already overburdened neighborhood.

At the meeting, the city laid out their intended use of the site, and community members voiced their opinions on what could be done with the land as an alternative. While its still early in the planning phase, Jose Luis and the EPEJC isn’t wasting any time coming up with possible solutions.

“Our vision is what happened here today. How can we get community voice and power to address an issue around health and stopping industrialization of our communities. At this point we are putting everything on the table.  If anything, I would argue the community is saying we don’t want any more industrialization here in East Phillips” said Jose Luis.

What’s the need and why East Phillips?

It has been classically known in the last 150 years as a magnet for industrial work and blue collar jobs as it sits conveniently located just south of downtown Minneapolis between State Highway’s 65 and 55 with easy access to railways and interstates. In 1879, the construction of the Milwaukee Road Railroad, part of which still exists in the neighborhood today as the Minnesota Commercial Railway, brought increased industrial traffic to the area.

East Phillips is already home to a foundry, an asphalt plant, a hot tar storage facility owned by a roofing company, and an asphalt hot-mix storage site for the City of Minneapolis Public Works Department. East Phillips is also the site of a Federal Pollution Super-Fund facility (called the arsenic triangle) and it continues to feel the effects from severe lead contamination as a result of leaded gasoline and lead paint in its aging housing stock. These factors have lead to one of Minnesota’s worst air quality and pollution indexes for a neighborhood, including higher than normal readings of Benzene and human carcinogen, which may cause Leukemia with long term exposure.

According to Greg Goeke, Director of Property Services for the City of Minneapolis Finance & Property Services Department, the facilities current site on East Hennepin was built in 1898 and is to be repurposed as a fire station to better serve the industrial needs of that part of the city and improve response times in emergency situations.

Moving locations would also save the City money in repurposing the 19th century structure into energy-efficient, up to date buildings.

The site would also benefit the City by continuing an initiative to better centralize the water Works department, allowing for less drive time and increased efficiency, reportedly saving the City 57,000 miles in driving according to preliminary traffic reports.

“We are not in the business of taking properties that people don’t want to sell, and we don’t like to use eminent domain. So with a willing seller, that is a helpful thing” said Goeke

Members of East Phillips Environmental Justice Committee have other ideas for the land in question. They would like to see an eco-friendly job center, urban agriculture institution educating youth on urban farming and sustainability, youth led bike shop focusing on the Midtown Greenway, hydroponics, (growing plants and fish to sell to local businesses) and a Solar farm to subsidize local energy.

Closely nuzzled near large warehouse spaces and workyards, sits urban residential housing, schools, and local businesses without so much as a sound wall put in place, and thats where the problem lies according to Sammie Ardito-Rivera, a community activist specializing in the industrialization of low-income communities of color. The neighborhood of East Phillips is home to nearly five thousand Minneapolis residents, many being communities of color.

Ardito-Rivera believes that any more additions to the East Phillips industrial burden, should be avoided.

“I think what it is, is more who bears the disproportionate burden of the industrial age that we live in. Communities of color and low income are bearing the brunt of this industrial age and East Phillips is one of those communities” said Ardito-Rivera.

“The people of this community are asking: Instead of having one more thing that’s not really directly benefiting our community, why can’t we co-create something, the City and the community, that benefits both and also comes from the ideas and the passions of the people that live in this neighborhood” Ardito Rivera added.

The question that lingered through that event and the events that followed is: Are the two sides willing to compromise.

According to Goeke, the answer is yes.

“We have done our first cut of estimated vehicle emissions, the building we would build on the site, or refurbish the current one, will be more energy efficient then it sits today. That’s what the City does-we are a responsible builder. Our current phase one building on Hiawatha is  the first leed platinum building for a Public Works department in the world, so we will be responsible with whatever we do on the property if the city decides to pursue acquisition. And if we don’t do it at the Roof Depot location we will do it somewhere else and be responsible there as well” said Goeke.

But those words didn’t satisfy the people of East Phillips, as they took to their phones, computers, and social media devices to get word out on this issue as the City Water

Department was set to vote on acquiring this space.

They bombarded City Council members responsible for the East Phillips area with calls and emails, screaming for a stop to the purchase of the Rood Depot location.

Those calls seemed to work as the acquisition was put to a halt until after the council’s Spring Break.

Luke Moe can be reached at Lukemoe85@gmail.com