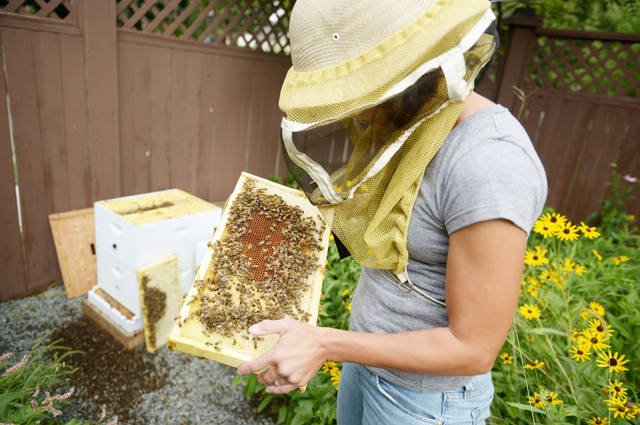 The University of Minnesota Bee Lab and the Minnesota Department of Agriculture are conducting tests to verify whether pesticides were the actual cause.

Minneapolis resident Mark Lucas noticed the bees he and his family keeps in their back yard behaving strangely Wednesday night, shaking on the edge of the hive and falling to the ground.

“They just come spilling out of the hive like they’re drunk,” he said.

Lucas’ hive was one of at least three hit in the Kenwood neighborhood, north of Lake Calhoun in Minneapolis.

The MDA took samples from hives Friday to test for pesticide contamination. Pesticide is suspected because of the way the bees died, said Becky Masterman, co-coordinator of the University’s Bee Squad, a division of the Bee Lab that educates and mentors local beekeepers.

Beekeepers suspect that a pesticide was used in the area and bees brought it back to their colonies after pollination.

“This was in no way on our radar,” Masterman said, because the colonies were known to be healthy.

One of the Bee Squad’s colonies was also affected by the incident, said Bee Squad co-coordinator Jody Gerdts.

The Bee Lab is conducting its own tests in hopes of getting results faster than the MDA, which could take up to six months, Gerdts said.

“If it waits six months before we can say anything, then the story’s gone,” she said.

The Beez Kneez, a Minneapolis-based honey bee education organization that delivers honey by bike, lost one colony over the weekend and is worried more colonies could be affected.

A typical Beez Kneez colony consists of 40,000 to 50,000 bees at this time of year, said co-owner Kristy Allen. The Beez Kneez owns 45 hives in the Twin Cities area. Though losing a colony could result in revenue loss, Allen said there’s also an emotional side to the incident.

Bees are indicators of environmental health, Gerdts said, and the fact that pesticides could have potentially been used incorrectly is “scary.”

“There [are] things that are out there that are being applied to our landscape that can do more harm than perceived good,” she said.

The bee deaths are part of the bigger issue of keeping pollinators healthy, as they contribute to food production, Masterman said.

The Bee Squad is using social media to raise awareness about pesticide contamination.

Lucas said his family will get new bees if his colony is completely wiped out. When he was a child, Lucas’ grandmother kept bees in Elk River, Minn., and he said he’s been interested in them ever since.

He became a certified beekeeper through the University and started building his colony last May.

His kids were hesitant to go into the backyard with the bees at first, he said, but later became very involved in the process — taking pictures and collecting larvae alongside him.

“It was a really interesting thing for our family to experience together,” Lucas said.

In the meantime, Lucas said, he’ll be spreading the word about the “unintended consequences” of the choices people make in their yards — such as fertilizer use — and their effect on the neighborhood.

“It’s crazy how much it’s really all tied together,” he said.