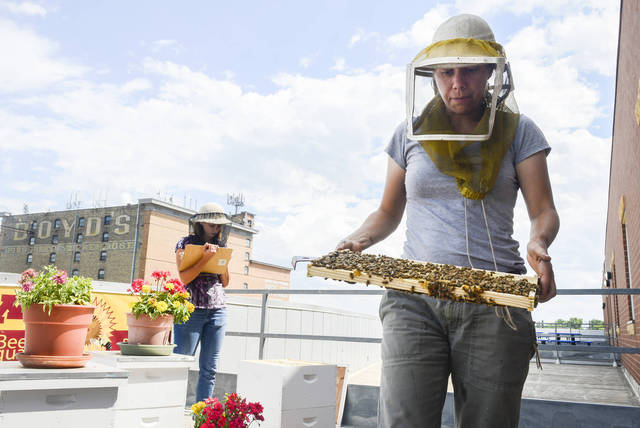 Bee Squad team member Chris Kulhanek carries a frame from a hive at the rooftop apiary at Urban Ventures in south Minneapolis on Monday afternoon. Recent state allocations will partially fund the construction of a new University Bee Lab on the St. Paul campus. (Photo by Chelsea Gortmaker)

Midsummer sunrays beamed on Monday as University of Minnesota researchers let a swarm of buzzing honeybees loose, allowing them to forage nearby fields before returning to the experiment’s site on the St. Paul campus.

Out of the hundreds of bees, researchers plucked a handful who carried a particular resin that could potentially boost the insect’s immunity. As one of the many bee experiments aiming to secure the species’ survival, the researchers took the sample population back to the University’s Bee Lab for testing.

Because of bees’ significant role in pollinating crops worldwide, researchers and elected officials agree the work to help protect the species is growing in importance. This spring, the Minnesota Legislature approved a bill that sets aside funding for a new bee research facility, which many in the department say is long overdue.

“We’ve been operating with a severe deficiency of space,” said Rebecca Masterman, a coordinator for the Bee Squad, an outreach branch of the lab.

Because of the current facility’s lack of space and central location, the researchers have continually faced challenges. But with the help of the new state funding, totaling almost $8.7 million, they are hoping to streamline and expand their work.

“[The current facility is a] cinder block building that is kind of disgusting,” said Katie Lee, a doctoral student and bee researcher. “It has mice, and it’s super crowded for the number of people we have.”

The new 10,000-square-foot facility will be an upgrade from the Bee Lab’s existing 900 square feet of office, storage and lab space that’s split up and spread across the St. Paul campus.

“If [the facility] is in one location, it will definitely make us more efficient,” he said.

The state’s allocation will fund about two-thirds of the project’s total cost, and private donors and the College of Food, Agricultural and Natural Resource Sciences will cover the remaining expenses.

She said the new facility, which is set to start construction next spring and finish in mid-2016, will also feature a place to extract honey — a feature the existing lab lacks.

“It will consolidate everything,” Spivak said.

Because honeybees pollinate an estimated one-third of the world’s crops, researchers and beekeepers across the country are concerned with the species’ health.

Spivak said honeybee colony populations have been declining steadily since the 1940s. An increase in pesticide use, decrease in crop diversity and change in farming practices, among other factors, have contributed to the drop, she said.

Studies at the Bee Lab are exploring man-made and natural solutions to those causes.

Some of the lab’s ongoing research targets the effects of insecticides and herbicides, which kill or weaken bees and flowering plants whose pollen and nectar is necessary for the insects’ survival.

“Planting flowers that bees like and not treating them with pesticides are important — so bees can have good, clean food,” Spivak said.

Later this month, entomology associate professor Vera Krischik plans to expand her research to the outdoors, testing whether neonicotinoid insecticides — which have been observed to impair bees’ memory, communication and ability to navigate back to their hive — are contributing to the wane in colonies.

Researchers are also discovering ways to capitalize on advantageous traits and behaviors found in a select number of bees.

Doctoral student and bee researcher Renata Borba is testing the health benefits of a natural resin, propolis, which some bees bring back to hives. Propolis contains antimicrobial properties that could enhance an entire colony’s immunity.

Another rare behavior in some bees allows them to detect illnesses in their young and remove them before they can infect a whole hive, Lee said.

“Hygienic behavior can help bees become resistant to things on their own,” she said.

While beekeepers have been working to make up losses, a decline in the species that is responsible for leading crops — including most fruits, vegetables and nuts — could eventually hit consumers with a spike in food prices and a less diverse diet.

“If we have a severe loss and inability to maintain the needed population, then our food prices will go up, and some foods might not be readily available,” Masterman said.