Attempts to thread the needle between the desire for the jobs the mines would bring and the pollution they might cause have centered around getting the mining companies to pre-pay for cleanup, or at least prove that they can and will cover their cost and not dump it on the state and local governments when the mines are finished and the companies move on. It seems like making the companies cover pollution costs as a condition of getting their permits is so inarguable, that the discussion should be about how they pay, not whether. That’s where we require a damage deposit.

The concept is like any damage deposit. Since the companies are essentially renting our land, they need to put aside enough to cover clean up costs. We can’t know the costs precisely, but make a rough estimate, and require the companies to put that much into a state fund. This has to be a fund the state controls, not the mining companies, though it would remain the companies’ money. It could even draw interest. When the mines are closed, the companies get their money back — minus cleanup costs. If that takes centuries, so be it. Any money left over, they get back.

The purpose isn’t just to cover the costs of mitigating environmental damage. The purpose is to provide an incentive for the companies to clean up after themselves and better yet, take every measure to avoid polluting. Unlike pre-paying, where they’re just out the money, and mining supporters understandably smell just an attempt to stop the mines altogether, this would be the companies’ money. If clean up is cheap or they avoid polluting in the first place, they get the money back.

What if they won’t pay a damage deposit? What would we think of a renter who refused to pay a damage deposit? Rather gives away their bad intentions. It would make me think the mining companies have a business model that depends on externalizing the costs. To take out the jargon, it would show the companies think that in order to make money, they need to make someone else pay for the pollution. Pushing off the costs for the fossil fuel industries so I get the appeal, except if you’re not the people making the profits, but rather the people paying, not so appealing.

I’m sensible of the desire to have those mining jobs. Mining is part of the culture on the Iron Range, as the name probably implied strongly. Many of the people hoping for these jobs were miners, or their family included miners, and it’s just part of their heritage. Or maybe it’s just hope of finding work without having to leave the place you grew up and hoped to remain. Whatever the deeper motive, people want jobs, and that’s completely understandable. I’m also aware that modern technology requires the minerals that will be mined. When supporters ask people to think about what’s in their smartphones, they have a point — we need those minerals. Getting them from elsewhere might mean getting them from a country with even more slack environmental laws than ours. That argument is valid. 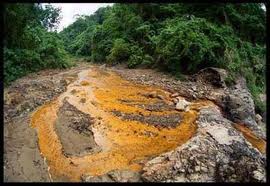 Yet opponents are right about the pollution. 500 years of pollution after the mining is done might be the outside of the range, but it’s a possible number. 20 years of a few hundred jobs isn’t worth 500 years of mitigating pollution at public expense. If the companies pay however, that’s different. Especially in Polymet’s case, given that it was formed by several companies just for one project, I can’t help thinking that the company will dissolve when the mining is done and oops, none of the former owners can be held liable as the successor company. So yes, I’d rather the cash were in hand, and if it’s hard to figure out who to return the deposit to, that’s the lesser problem.

Let me really stress that part about incentives. Making the companies pay enough up front to cover cleanup, knowing they’ll get the money back if we don’t have to spend the money, provides a huge incentive to not make us have to spend the money. Pollution prevention, always cheaper than cleanup, changes immediately from a cost to be dumped on the public into a way to get that big pot of money returned. They have an incentive to be responsible right from the start, to include pollution prevention in their planning, to improve and incorporate mitigation technologies. If it’s a matter of cleanup, they have an incentive to do it themselves instead of leaving it to us and hoping we do it cheaply. If you think the government can’t do anything right, then you should really want to take care of your pollution yourself.

How much should the damage deposit be? I don’t know. There’s no way to know. Any estimate of final costs will be very rough. Maybe the technology of sulfide mining will improve over coming decades, but on the other hand, this sort of mining has a bad record, and we have a lot of water in this state to be polluted. But how important is exactness? Landlords don’t know how much damage a renter will leave behind, and the renter sure has no idea what cleaning and repairs will cost. A typical deposit equal to a month’s rent seems like a number related to something, but really, it isn’t. It’s a guess. But it works. So we don’t need to be exact. We need an estimate, and then add to that in case the estimate is low. The companies I’m sure will hate the idea, but, if the deposit is too big, doesn’t really matter — they’re going to get it back anyway. With interest, as I suggest doing it.

And if the companies won’t make a deposit, well, then we know who they really intend to stick with the costs. And we can say no.