Unbelievable and yet still true! There are many reasons why the Minnesota Republican endorsement of Michelle MacDonald, Minnesota Supreme Court justice is just very wrong.

Republicans have taken to endorsing for judges based on stands on legislative issues. Apparently Republicans have entirely given up on just enforcing the law fairly and leaving legislative fights to the legislature and governor. The Republican endorsing speech listed MacDonald’s pro-life stance, opposition to judicial activism, and small government views as the reasons to vote for her, which they did almost unanimously. Apparently they must expect that judges can change how they act in court based on what the laws should be instead what the laws actually are.

2) Minnesota Supreme Court justices should fairly enforce the Minnesota constitution and Minnesota laws not take a religious text as law.

Forget the law and the constitution, her campaign slogan is “God bless America, again”. Apparently Republican rants about Sharia law were not fears about mixing religion and law, the Republican fears were about picking the right religious law. Michelle MacDonald said in her speech before the Republican convention:

In the words of George Washington, it is impossible to rightly govern the world without God and the Bible.

Now MacDonald did have references to “liberty rights” which I fear may mean the liberty to follow what MacDonald’s interpretation of what her bible says to do.

MacDonald was arrested April 5, 2013 for suspicion of drunk driving and resisting arrest. When stopped for speeding, the officer noticed alcohol on her breath and other signs. MacDonald refused to take an alcohol test, that by law must be taken within two hours of an arrest. She had to be physically removed from the vehicle. Those actions trigger a the more serious resisting arrest charge. She faces a criminal trial this fall.

The Republican Judicial Election Committee knew about this incident and did NOT consider this to be an issue to bring up to the general floor before voting. That means the Republicans endorsed a person facing a criminal trial for the highest legal office in Minnesota. It was not even an issue worth discussing. 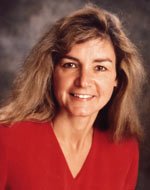 Not only did MacDonald fail to conform to court standards of behavior resulting in being put in jail, she then refused to get ready for court. The deputy delivered her, handcuffed to a wheelchair, without glasses and without shoes. Who would want to be represented by this type of lawyer? What if she does not want to show up for Supreme Court hearings?

Yet the Republican Judicial Election Committee recommended that the Republican Party of Minnesota endorse McDonald to run for the Minnesota Supreme Court, without reporting on any of this to the convention, even though they discussed this in detail within the committee.

I guess it could be worse, Sharon Anderson, who was not even an attorney, won the Republican primary to run as the Republican candidate for Minnesota in 1994. At least MacDonald does have a law degree and has practiced law.

Politics in Minnesota noticed that:

On the website of her nonprofit group, the Family Innocence Project, MacDonald writes that she worked as a lawyer in family court for 25 years before an epiphany led her “to the radical belief that the family courts should be abolished.”

MacDonald’s Family Innocence Project has the mission of:

Family Innocence is on a mission to eliminate court for families altogether.

The Republican executive board meeting left the endorsement intact after discussing these issues.