In your neighborhood, on your block and probably even people you know have been foreclosed upon. Where I live in Minneapolis there are blocks where nearly half the homes are foreclosed. We read horror story after horror story. The banks are corrupt and incorrigible. And there doesn’t seem to be an end in sight.

Today, a coalition of community organizations, faith groups and Occupy Homes MN released a report detailing a plan to get us out of this morass. 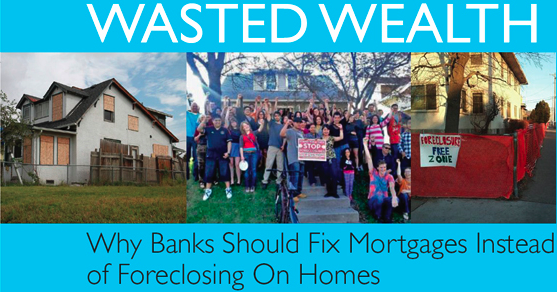 “This was a crisis caused by a system of corruption that preyed on the vulnerable and people of color,” explained Rev. Paul Slack, Pastor, New Creation Church Minneapolis and President of ISAIAH. “It was not caused by individual homeowners who have suffered the greatest burdens and are left with too few solutions. We need bold action from our policymakers from the local to the national – implementing principal reduction and foreclosure mediation to protect our families and rebuild our communities.”

Here are their main conclusions:

I find it surprising that not foreclosing is in the bank’s best interest. But since banks are intractable, the Minnesota legislature will need to pass a law to save them money and help endangered homeowners. Ironically, I’ll bet their lobbyists will oppose this legislation.

Of course, a DFL legislature might be able to pass such a bill … so here’s hoping!