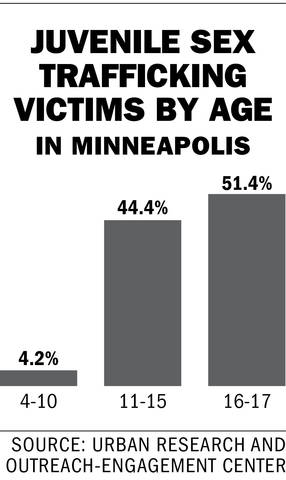 The study, released last week by the University’s Urban Research and Outreach-Engagement Center, found that juvenile, female sex trafficking in the city operates under a brutal business model that relies on violence and manipulation. Local police officers say they’ll use the information to improve how they deal with victims and offenders.

University researchers began work in 2013 and looked at six years of police reports, court records and media accounts to conduct the study. They also interviewed 89 professionals, including law enforcement officials, who work with victims of trafficking.

The study found that traffickers employ high levels of violence and organization, which lead researcher Lauren Martin said was surprising.

“There is a market for exploitation that operates just like any other business,” said Martin, who is UROC’s director of research.

Martin said she expects that the study’s findings will provide useful background information for people who work with juvenile victims of sex trafficking, like school counselors and police officers.

“It’s always better to intervene with the youth before they get fully involved with trafficking,” she said.

Every Minneapolis police officer will receive condensed information from the report to help them recognize and react to trafficking situations, said Deputy Chief Kristine Arneson.

“It’s our investigators and our cops on the street [who] are going into people’s homes all the time,” Arneson said. “We’re in the schools; we’re in the parks; we’re in all these areas where [juvenile trafficking] is happening. We want to be more educated on what to look for.”

In 2009, the FBI ranked Minneapolis among 13 U.S. cities with high levels of child prostitution.

That type of protection could soon span the nation.

U.S. Sen. Amy Klobuchar, D-Minn., authored a bill that would require all states to enact a law modeled around Minnesota’s law. The U.S. House passed a similar provision in May.

She said in a news release that the University’s report shows the need for a strong fight against trafficking.

“[The report] is more hard evidence that sex trafficking is not something that only happens half a world away — it’s happening here in our own backyards and we need to take action,” she said in the release.

The study took an in-depth look at who victims of trafficking are and how they’re recruited, Martin said.

More than half of the victims studied were runaways or juveniles who missed their curfew, the study said, and recruitment takes place across the entire metro area.

The victims, who were coerced and sold, were also overwhelmingly from poor areas, Martin said.

“There have been similar studies, but none that have pulled the lens back and looked at the wider picture to connect the dots,” she said.

Researchers also discovered that the trafficking market is structured differently than previously thought.

In addition to the common concept of a pimp acquiring several victims, Minneapolis’ sex traffickers use victims’ peers to lure them into the trade.

Many sex trafficking victims are also victims of domestic abuse, Arneson said, so additional resources for victims in that area could help stop trafficking.

In the future, Martin said she’d like to examine federal court cases of juvenile sex trafficking.

“This is a hidden, stigmatized activity,” she said. “For all we know, this has been going on for 40 years. We just didn’t know about it because people weren’t looking.”