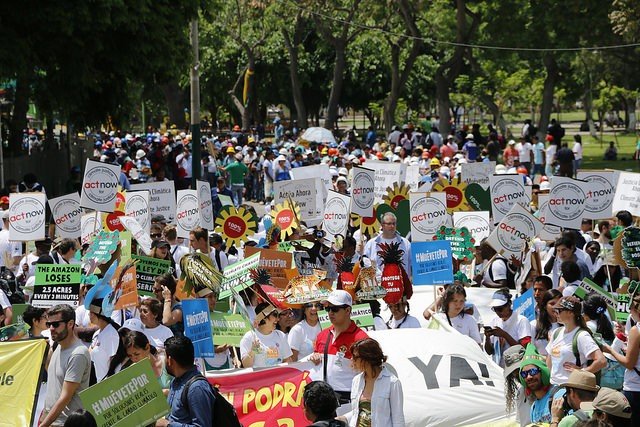 Photo by Oxfam International, via Flickr. This photo is licensed under the Creative Commons Attribution-NonCommercial-NoDerivs 2.0 Generic License.

I had the honor of being part of a nurses delegation to the U.N. Climate Change Conference in Peru. These are my impressions as one nurse in Lima.
We went as a delegation representing National Nurses United (NNU), the national umbrella for my state nurses union—the Minnesota Nurses Association.  We were there to address the issue of Climate Change and the impacts of pollution generally from a public health perspective. NNU’s official position is that the “Climate Emergency is a Health Emergency”:

NNU emphasizes the health impacts of climate disruption. Already, more than 8 million deaths worldwide are directly attributable to air pollution, primarily due to the use of “combustion energy” derived from the burning of oil, gas, coal, biomass and waste, and lack of access to clean energy. Warming temperatures have accelerated the spread of vector-born diseases such as Ebola, malaria, dengue, yellow fever and Lyme’s disease that spike as temperatures increase … desertification, devastation and displacement from severe weather events and sea level rise … will lead to immeasurable human suffering and economic devastation.

We were granted official observer status for the conference sessions. We met with the president of the Peruvian state nurses association regarding the public health challenges for the people that are trying to serve with inadequate resources. She called for taking the caring that nurses show for their patients out into the community at large. We also met many other environmental activists from around the world hoping to make progress on agreements that could help avoid some of the worst predictions of climate change.

A compromise was pounded out at the Lima Conference in the 40 hours of negotiations after the official deadline.  But the agreement ratified in Peru contains no language to compel or require countries to achieve emissions reductions. Instead, as stated in the Guardian (http://www.theguardian.com/environment/2014/dec/15/lima-climate-deal-what-was-agreed-and-what-wasn’t):

All countries will be asked to submit plans for curbing greenhouse gas emissions, known as “Intended Nationally Determined Contributions,” or INDCs, to the United Nations by an informal deadline of March 31, 2015, as the core of a Paris deal.  But there will be few obligations to provide details and no review to compare each nation’s pledges … The text says INDCs “may include” details such as base years and yearly targets, far weaker than a former draft that said nations “shall provide” such details.

There were divisions among the many parties participating in the conference.  Developing and more developed industrialized countries debated who should be carrying more of the burden in lowering greenhouse gas (GHG) emissions. The tortured compromise language became, “common but differentiated responsibilities and respective capabilities in light of different national circumstances.”

A Green Climate Fund was also promoted in Lima to help developing nations cut their GHG emissions and deal with the worst potential impacts of climate change (storms, diseases, food shortages), with the goal of $100 billion per year in public and private funds by 2020.  But, in the end, nothing was required—only requested.

Some union activists were arguing for strategies of “Just Transition” to again be included in the final agreement. This would provide support and strategies for countries to help their workers transition away from polluting, ecologically damaging and unhealthy industries to jobs that can coexist with a planet on the verge of a global climate catastrophe. There had been a huge trade union member mobilization (whether sanctioned or not by their leadership) at the Climate Change march in New York after Hurricane Sandy made the potential consequences of climate change very real. No “Just Transition” language was included.

In its final form, the 37-page grand compromise includes a variety of options requested by the many disparate parties.  With no clear path forward, many tough decisions will be put off until Next Time in Paris, 2015.

It was difficult to watch the time for negotiating a historic agreement slip away while the news headlines were full of reports of erratic weather patterns causing massive mud slides in northern California, a devastating tropical storm in the Phillipines and a failed olive harvest in large parts of Italy and Spain.  I read also that the U.S. Congress managed to pass some kind of budget to avoid another government shutdown but again no agreements or framework on how to move forward as a country on climate change. While the signs all around us seem to be demanding some urgency—the politics and economics grind on in a business as usual fashion.

In other news: A recent Gallup Poll again ranked nurses as the No. 1 trusted profession (http://content.gallup.com/origin/gallupinc/GallupSpaces/Production/Cms/POLL/bcby_eugqucl77h-uwyelw.png).

As a nurse, this is gratifying news.  It was also interesting to note the lowest ranking professions.  Dead last were lobbyists, then came Congress members, then car salesmen.

Lobbyists for fossil fuels and other industries were very evident at the summit. A joint press conference of Friends of the Earth, Sierra Club and other environmental groups in Lima lamented the influence of big polluters on the U.N. Climate Change Conference proceedings.  They stressed the urgency of the situation and what people can do in their own communities and within their own countries to make a difference (UNFCCC Webcast – Lima COP 20 | CMP 10 – On-Demand – University of California: WHAT NOW For Climate Justice? – Assessing Lima’s Outcomes, Identifying Social Movement Strategies for Paris).

This perceived influence of powerful corporate interests on the U.N. proceedings was also part of the impetus for People’s Summit on Climate Change as an alternative to the official U.N. session. The People’s Summit organized a march of hundreds of thousands through Central Lima in the massive Climate March as well as educational sessions to discuss what organizations were trying to accomplish all over the world to address the current emerging environmental crisis. The stated ambitious goals of the People’s Summit were to “Develop an alternative form of development, one that respects the limits and regenerative capacities of Mother Earth and tackles the structural causes of climate change.” (http://cumbrepuebloscop20.org/about-us/peoples-summit-on-climate-change/)

Or, as some simply said, We want systems change, not just climate change!

This is a call for systems focused on conservation of energy and resources, and serious regulation of all polluting emissions that impact local communities and our planet as a whole. In the ranking of lobbyists and Congress members, the public seems to understand that they are not being served by business as usual politics at home.  Science indicates that business as usual isn’t serving the long-term sustainability of our planet for human life either.  So how can we move forward?
My belief: If we demand it we can do a better job of eliminating sources of pollution at home and make real progress at the Climate Summit in Paris next year. But make no mistake. Nothing of substance will happen without concerted effort and sustained political pressure.