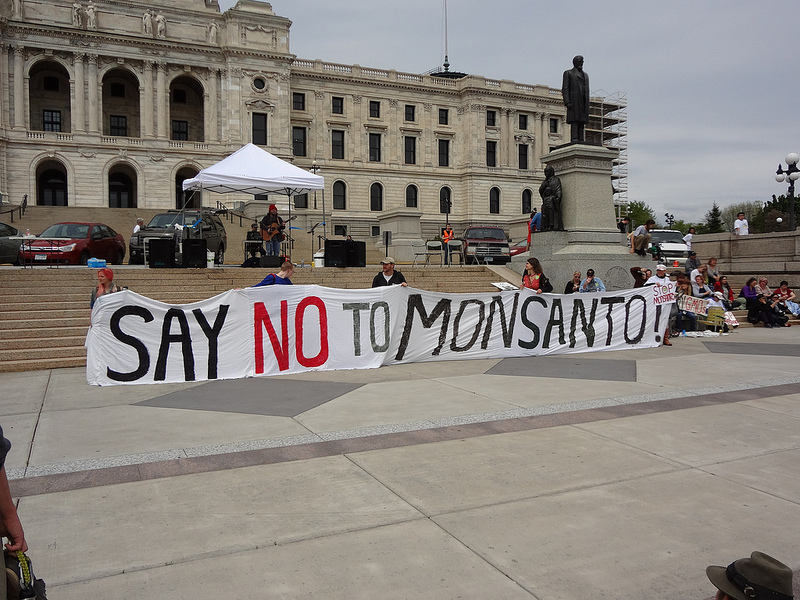 On Saturday, May 25, IATP participated in the March Against Monsanto (MAM) in St. Paul, Minnesota. The MAM took place in 436 cities in 52 countries, with an estimated two million participants. Monsanto was the focus not only because of the scale and reach of its products, but because of its undue influence on the global food system. A recent Food and Water Watch report, summarizing 936 Wikileaks documents, gives an idea of what the U.S. State Department has done to change laws and enable sales of Monsanto products around the world. Indeed, multiple U.S. federal agencies have advanced the company’s commercial interests, in the face of the rejection of Monsanto products by many farmers, consumers, academics and governments. Nevertheless, in the name of free trade and food security, the U.S. promotes GMOs to “feed the world.”

In St. Paul, the march was followed by a rally on the steps of the State Capitol building. The rally featured music and speakers, including yours truly (see video and photos).

I asked MAM participants to urge Minnesota Senators Al Franken and Amy Klobuchar to support Senator Jeff Merkley’s amendment to the Farm Bill that would repeal a rider that had been attached to the March federal budget resolution. The rider was added anonymously and passed by the Senate as the clock moved toward a budgetary shutdown of the government. That rider, dubbed the “Monsanto Protection Act” requires the U.S. Department of Agriculture to allow planting of genetically modified seed varieties even when the USDA’s decision to approve planting is being challenged in court, e.g., for failing to have provided an environmental impact assessment (EIS), as required by the National Environmental Protection Act (NEPA). In effect, a continuation of the Monsanto Protection Act in the Farm Bill would nullify the legal effect of NEPA and other laws relevant to biotech crops.

One reason to protect NEPA: 61 million acres of Super Weeds in United States that have developed resistance to glyphosate, chiefly due to Monsanto’s RoundUp Ready seed varieties. About half of 3,000 farmers surveyed by the Stratus consulting group in 2012 reported having Super Weeds on their farms. The resistance to RoundUp cannot be controlled without a huge loss of Monsanto’s sales so Monsanto has applied for immediate deregulation of seeds engineered to withstand even more toxic pesticides, like 2,4-D and dicamba.

In mid-May the USDA’s Animal and Plant Health Inspection Service announced that it would require an EIS of the 2,4-D and dicamba resistant seeds. The USDA decision was welcomed by the Center for Food Safety (CFS), which had successfully sued the USDA for having failed to perform EIS’s on genetically engineered sugar beets and alfalfa. CFS challenged the USDA’s EIS evaluators to reach out to other federal agencies with public and environmental health expertise, pointing out that 2,4-D and dicamba drift from where they are applied to other fields and nearby homes. Epidemiological studies have associated both pesticides with increased risk of cancers among farmers and their families.

The Merkley amendment to repeal the Monsanto Protection Act and the USDA decision to require an EIS for 2,4-D and dicamba could be important steps in the struggle for sustainable agriculture. However, as the United States Trade Representative and its corporate advisors prepare an assault on European health, environment, safety and even privacy regulations in the Transatlantic Trade and Investment Partnership (TTIP) negotiations, attention will turn to U.S. deregulatory practices. If the Farm Bill allows Monsanto and other biotech companies to circumvent NEPA and other laws relevant to genetically engineered foods, the USTR’s claim that U.S. GMO approvals are “based on science” will be exposed as a 20-year charade.

The Biotechnology Industry Organization (BIO) proposed to the USTR that the TTIP create a Sanitary and Phytosanitary Committee “which commits the EU and the U.S. to the application of sound science and to promptly resolve issues should they occur.” BIO also proposed that its members be allowed to provide “technical expertise” privately to governments but that data concerning regulatory approvals be maintained as Confidential Business Information, as it is in the U.S. deregulatory approval system. (See IATP’s comments to USTR here.)

As I pointed out to the MAM rally participants in St. Paul, “sound science” is a term coined by a public relations firms working for cigarette manufacturers to argue that cigarette smoke posed no health risks for non-smokers. It will be a brutal irony, and a framework for increasing public health risk, if the USTR convinces European TTIP negotiators to abandon European Union member state public and environmental health protections in order to increase trade by a transatlantic commitment to “sound science.”

(Photo courtesy IATP; See all of IATP’s photos from the St. Paul March Against Monsanto on our Flickr page.)