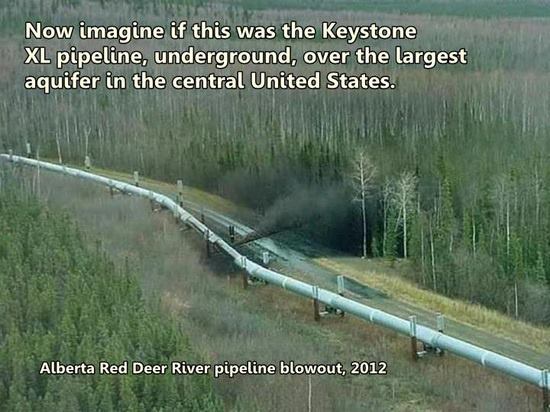 With so much attention focused on the Keystone XL proposal, it can slip one’s mind that there are proposals from Big Filthy Fossil Fuels for pipelines everywhere.

Citing both environmental and economic concerns, Minnesota’s Eighth District Congressman Rick Nolan has expressed his opposition to the proposed route for the Enbridge Sandpiper pipeline.

In a letter to the Environmental Manager of the Minnesota Department of Commerce, who is evaluating the project’s application, Rep. Nolan spoke of his ongoing concerns, as well as those of local residents, regarding the proposed route’s threat to environmentally sensitive areas of Minnesota. The current route requires the pipeline to cut through vulnerable northern wetlands, porous sandy soil and water tables used for drinking water, and some of the clearest lakes in the state.

“There’s no compelling reason why the Sandpiper pipeline can’t be rerouted to avoid environmentally fragile areas,” said Nolan. “From my meetings and communication with agencies and local advocacy groups, it’s clear there are several alternative routes out there that would take the pipeline south of this region, and thereby prevent a devastating ecological disaster in the event of a pipeline spill.”
(Rep. Nolan press release)

Here’s an overview of the Sandpiper project. Opposition to the proposed route is in fact not a brand new phenomenon.

Honor the Earth officials say the Sandpiper pipeline is planned to go near or through some of the most environmentally fragile areas of the state, including the country’s largest wild rice bed. Enbridge, Inc. officials say they have 65 years of safe experience with Minnesota pipelines.

“This is a pipeline that is going through the middle of the lakes,” LaDuke said, adding that makes it an issue concerning all Minnesotans, not just Indians.
(Pioneer Press)

Another Enbridge “asset” that runs partly through Minnesota is the Alberta Clipper pipeline, that is being expanded. Enbridge has been doing well in court.

Bulding/expanding pipelines is hardly consistent with the necessity of rapidly reducing use of fossil fuels. I’ll leave it at that.