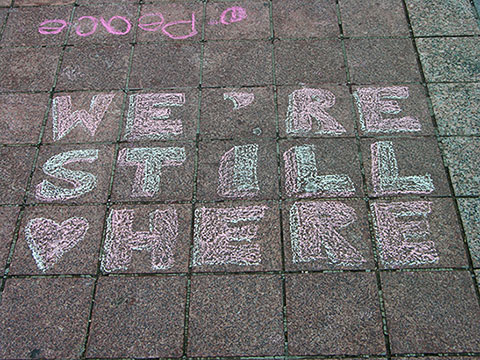 ReOccupy Minneapolis began on April 7 2012. The sites chosen were Loring Park and Peavey Plaza in Downtown Minneapolis. I took a bike ride on Saturday afternoon and was in the two areas between approximately  4:45 p.m. and 5:45 p.m.. Here is a collection of some of the messaging on display. It by no means covers all of the goals or the multifaceted concerns and aspirations being expressed through the Occupy Movement.

My goal is to show others some of my observances and that they may lend the movement their support, encouragement, and possible participation. from www.occupyminneapolis.mn the Statement of Unity;

Passed by the General Assembly of Occupy Minneapolis on October 22nd, 2011

We are creating a global, sustainable community that values the health of the Earth and its inhabitants over corporate profits.

We are a diverse group of non-violent people and we find strength in that diversity. No one person or group speaks for all of us as a whole. We wish to see an end to the corruption of both corporations and government.

We will persist until the voices of the people overcome the corrupting influence of money.