Working a “second shift” is taking on new meaning for lower income Minnesota families trying to house kit and kin in a modest, two-bedroom apartment. For many, that second job is a must just to afford the basic necessities.

There are several reasons why. First, we experienced the mortgage markets’ titanic collapse. This also caused the economic downturn that led to private sector layoffs beginning in 2008. Federal efforts in 2009 to stimulate an economic rebound were undermined when state, local and even the federal government balked at fair fiscal policy to balance budgets and cut public jobs and private sector investment. Historically high unemployment lowered household incomes, meaning fewer families could afford mortgages and began looking to the rental market for housing.

Now add in the Great Recession slowing multifamily housing construction and you have a cascading impact to drive up rental demand, thus increasing rental prices.

Minnesota Housing Partnership (MHP) and allied housing, jobs and poverty groups now calculate that a Minnesota worker would need to earn $15.50 per hour to work 40 hours a week and pay Fair Market Value rent for a modest two-bedroom apartment. What they find, however, is that the typical Minnesota renter earns $12.17 per hour. Many renters live at the government’s $7.25 per hour minimum wage. 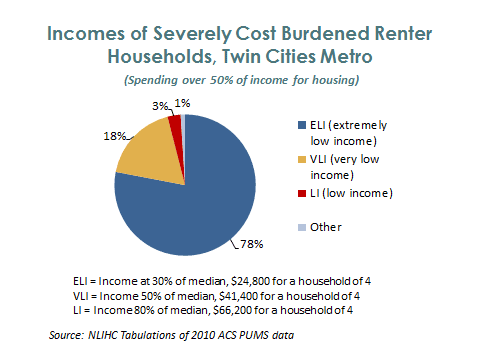 Examinations of household income data show softness in the Minnesota economy and expose the need for course corrections in public policy to begin raising the standard of living for huge numbers of Minnesotans.

Minnesota is the costliest state in the Midwest for renters. The National Low Income Housing Coalition’s (NLIHC) 2012 report, Out of Reach, uses a matrix of measures to determine what it would cost a family of four to rent a modest two-bedroom apartment.

Falling in behind them are Kansas and Ohio where 70 hours a week are needed to secure modest housing, 68 hours a week needed in Iowa and North Dakota, and 64 hours a week in South Dakota.

The late Sen. Paul Wellstone, D-Minn., irritated two former presidents—one from each party—when their campaigns cited jobs created during their first four years in office without elaborating on the quality of the jobs.

“Yes,” Wellstone said of the new hiring claims. “I know a single, working mother who has two of those jobs.”

That wasn’t just a clever way to make a point. New data, updated in March, show that 139,076 of Minnesota’s 559,266 rental households are considered by generally accepted national standards to be “severely burdened” by housing rents.

These are households that have incomes at or below 30 percent of their area median income.

The Minnesota Housing Partnership and the Minnesota Coalition for the Homeless organizations jointly released state data from the study in March. Leigh Rosenberg, research and outreach manager for the Partnership, said the data show housing affordability to be a problem scattered around the state and not just in the densely populated Twin Cities metro area. 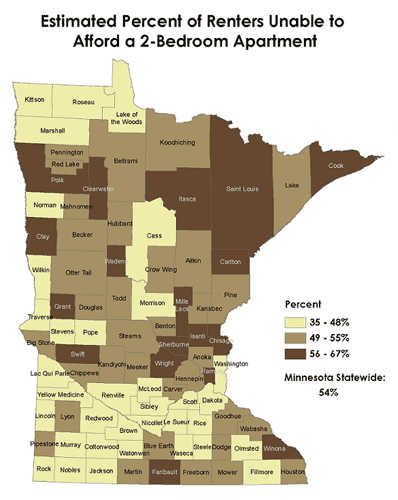 In an April blog, Rosenberg showed NLIHC profile findings of renters (pdf) for the state and each of Minnesota’s eight Congressional districts. No area of the state is immune to these housing problems. By extension, it also means state and local officials, working with the construction and housing industries, will need to address localized affordable housing problems.

Longer term, Minnesota and the nation must look again a minimum wage legislation to make realistic adjustments to inflation.

Further, conscientious Minnesotans must stand firm opposing “stomp ‘em while they’re down,” anti-worker legislation circulating at the capitol. As the housing squeeze shows, this is a poor time to lower household incomes.