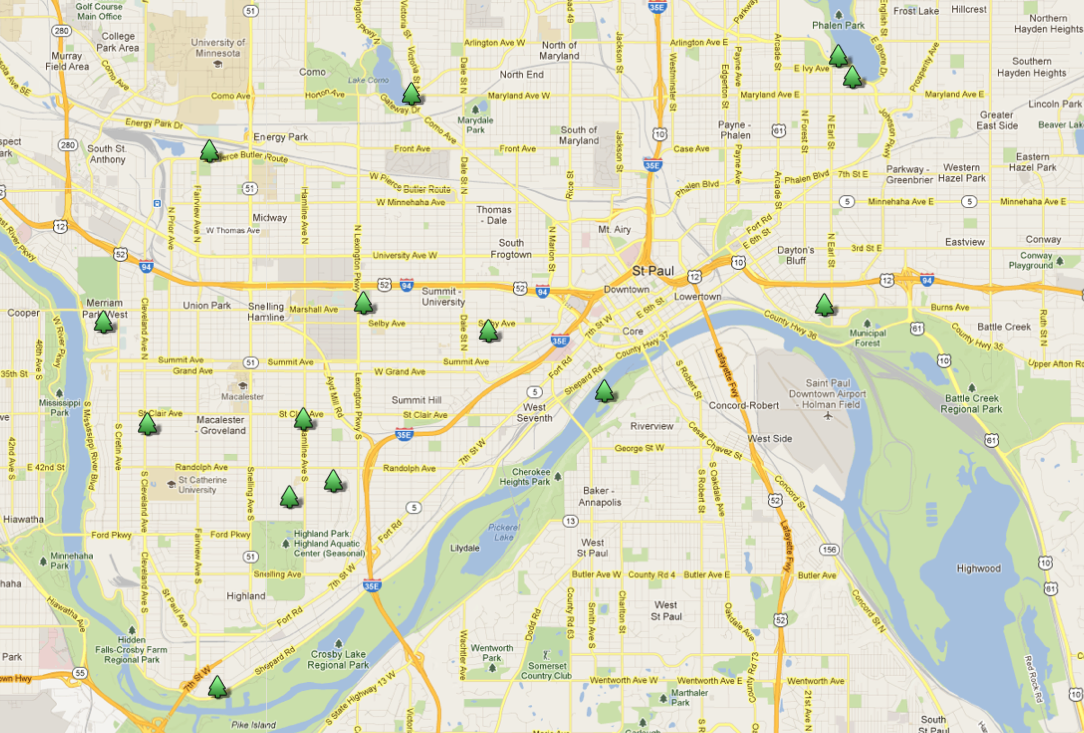 A screencap of a map of identified landmark trees identified by the forestry unit of the City of Saint Paul, taken from the city's website. The Newell oak grove was nominated to the landmark trees list in 2010 by Anna McCulloch.

Newell Park, wedged between Fairview and Pierce Butler, is host to a grove of more than 150 oak trees identified on the city’s landmark trees list. This grove was already established when the park was dedicated in 1908, one of the last native growths in Saint Paul of its kind.

“Newell Park is one of the oldest parks, if not the oldest park, in the city, and it is very iconic for the old-growth oak trees that exist there,” said Brett Stadsvold, a natural resource technician with the City of Saint Paul’s forestry unit. “So it is very important to the community of Saint Paul to make sure that we have trees to replace the mature oak trees in the future… so that we have something new to take the place of anything that comes down.”

“In terms of mass stands like Newell Park, there is nothing else that is part of the landmark tree program,” Stadsvold added.

The seeds of the reNewell Project were really planted four years ago, when Chad Giblin of the University of Minnesota’s Department of Horticultural Science struck up a research partnership with the forestry unit of the Saint Paul’s Parks and Recreation department.

“The main focus that we are looking at with our research partnership is ‘What can we do to get younger trees established in the parks, on the streets, in the city, or so forth,’” Giblin said. “So is there a different way we can plant them? Can we add something to the planting? Basically establish more readily and also then be more healthy long-term.”

“Basically trying to expand the palette of trees we can plant in the urban environment. It’s really difficult with pollution and road salts and different things,” Stadsvold said.

The need to establish (that is, for a tree to reach a point where its root system and trunk are strong enough to survive for many years to come) young oaks comes up repeatedly in my conversation with Giblin, himself a Hamline Midway resident.

“It’s a challenge. Burr oak is a popular tree — but burr oak is a native shade tree. Everyone loves that tree. It’s large and it’s stately, but the problem is it is very difficult to establish as a young tree,” Giblin said. “We have lots of shade parks that have oaks much like Newell Park, but getting young oaks back in there using various methods is challenging.”

Until recently no efforts were undertaken to sustain the Newell oak grove.

“Unfortunately, the trees are roughly the same age and without introducing younger trees and taking measures to protect existing trees, the tree canopy at Newell Park will eventually disappear,” Krogstad noted in a recent email.

Last year, Giblin and Stadsvold took part in the Heartwood Festival, leading planting demonstrations and assisting in efforts to replace six trees lost to vandalism. This year, under the banner of the reNewell Project, the organizers are hoping to plant 100 tree seedlings raised from seeds from the park gathered by Giblin. They also plan to remove several invasive species found in the grove, including buckthorn.

“The festival is called the Heartwood Festival. It kind of focuses around trees, and greening your neighborhood, so it kind of turned into a project to sustain the oak population in Newell Park,” Stadsvold said.

“Last year we tried to engage a few [volunteers], but I think marketing could have been a bit better,” Stadsvold said. In other volunteer events, we’ve had much better success in engaging the public.”

“I know the neighborhood there is very involved,” Stadvold added, citing the “fantastic participation” of residents of the Hamline Midway neighborhood in the reestablishment of the Horton Park mini-arboretum. “We’d like to repeat similar involvement this year with the Heartwood Festival.”

The Heartwood Festival will take place on Saturday, June 1, beginning with a parade starting at the Hancock Recreation Center and ending at Newell Park. The organizers of the reNewell Project are seeking community input as they plan the planting in conjunction with the festival, and those interested may email Faith Krogstad (faith@hamlinemidway.org) to get involved.