So here I am in Istanbul.

I just got back from a big trip — to Vietnam — and I hadn’t planned to travel again so soon, but when my son Micha called me from Austria and said, “Dad, let’s take a trip together,” I knew it was an opportunity I couldn’t pass up.

We agreed on Istanbul, and at the last minute, I sent an email to Kevin Sheehey, owner of Cafe Maude, because I had heard that he knows and loves the city. Kevin responded immediately, saying that he happened to be in Istanbul with a group of Minnesotans, and suggested I call when we arrive.

Our first day in Istanbul (Saturday) happened to be the last day for Kevin and his group, but Kevin kindly invited us to join them for their last dinner together, at Peymane La Cucina in the Tophane district. Our dinner, served on platters, consisted of many different kinds of mezze (appetizers) — spicy eggplant, stuffed grape leaves and more, accompanied by traditional Turkish breads. This was followed by platters of kebabs of lamb and chicken, chicken wings and chopped lamb, grilled in the traditional Turkish manner over a charcoal fire. The dinner concluded with baklava, kabak tatlisi (poached pumpkin), and a couple of other sweets. All in all, a delightful introduction to Turkish cuisine. 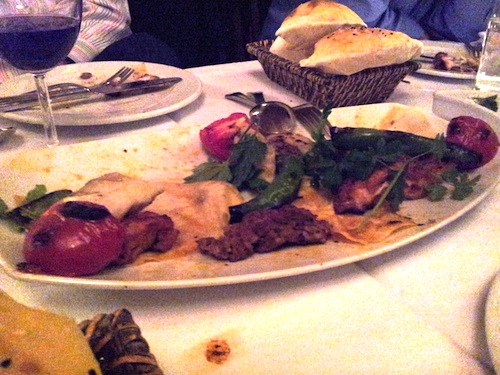 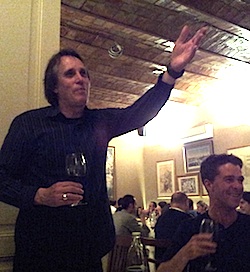 Over dinner, Sheehey’s Minnesota companions talked about the great time, and great meals they had had in Istanbul. It turns out that this group, and one the week before, were the first tour groups that he had ever led, but he has a couple more planned for this November. Check the Cafe Maude website for details. Kevin did pass along one bit of Twin Cities restaurant news — he plans to open a second restaurant, Cafe Maude at Loring Park, in the former Nick & Eddie’s location this July.

That was Saturday night, and it seems like we haven’t stopped eating since. Food is everywhere — on the street, carts that sell fresh cooked mussels and roasted chestnuts and grilled corn on the cob and simit (sesame-crusted rolls) and roasted nuts and fried pastries that look like churros, and at the doner stands (like gyros, but much tastier) on nearly every block where men with big knives carve slices of lamb or chicken from big roasting blocks of meat to stuff into loaves of pita.

At the restaurants that serve kebabs and mezze, you can see the day’s offerings in the storefront windows – brightly colorful platters of eggplant and stuffed grape leaves and peppers and marinated mushrooms and hummus in one window, and a rich assortment of baklava and other sweets in the other. 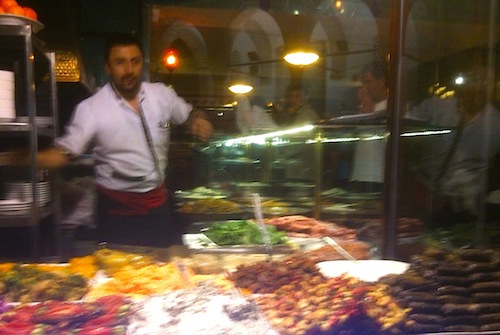 Enough for now – I came here to spend time with my son, not blog about my dining experiences, but maybe I will have some more Turkish stories to share when I am back in Minneapolis next week.