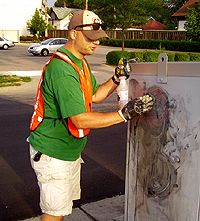 At first Espeland didn’t know where to go with his graffiti complaints, so he went to the Longfellow Community Council to see if there was a group in place that dealt with graffiti. There wasn’t. So, with the help of the MPD’s Crime Prevention Specialist Shun Tillman, he started one. Espeland recounted that Tillman arranged with the city to get the supplies and organized a community graffiti removal night.

Six volunteers showed up that first night to East Lake Street and 36th Avenue, and spent the evening taking off graffiti. “People saw what we were doing while we were doing it and said, ‘thank you,’” said Espeland. “That was a sign of what was to come.”

This year is R.E.M.O.V.’s seventh year, and it in that time the group has removed graffiti on 80 miles worth of streets in Longfellow, and more than 12,000 tags.

Through R.E.M.O.V., Espeland organizes community graffiti cleanups, sends out tips on how to remove graffiti on different surfaces, and posts pictures of local tags so residents will know what to watch for.

R.E.M.O.V. has permission to take graffiti off of public property. Dealing with private property gets a little bit trickier. If the business or property owner is available when the group is out working, the volunteers can just ask the owner if they can go ahead and remove the tag. If they aren’t available, the graffiti is reported to the City of Minneapolis. The city will send a crew to to take a picture of the tag. The property owner then gets a letter from the city letting them know that they have seven days to remove the tag. The crew from the city will come back to the property in seven days and if it isn’t removed, the city will take care of it – with no guarantee that the paint, if used, will match the building – and then they bill the owner for the removal cost. This can be a lengthy process, and it is what bothers Espeland the most. He explained, “The key with curbing graffiti is to get rid of it right away.”

Even if you do remove graffiti yourself, Espeland says it’s important to report the graffiti to the city. They use the reports to track the graffiti and to build cases against the more prolific taggers.

In the most recent data from the city, the Longfellow neighborhood ranked sixth in the number of tags reported (256) by Minneapolis neighborhoods, Howe ranked seventh at 246. As a comparison, Whittier had the most reported graffiti at 724 cases. Combined, the neighborhoods of Cooper, Hiawatha, Howe, Longfellow, and Seward filed 920 graffiti reports in 2011.

While Espeland doesn’t believe that the amount of graffiti itself has been dramatically reduced, he has noticed that it comes down a lot faster. “I know tagging won’t go away, but we have to stay on top of it,” he commented.

How You Can Get Involved

All community residents are invited to attend cleanup events, join the group’s email list and Facebook page, and remove graffiti as it appears. Espeland also encourages block club leaders to have a graffiti removal kit on hand and organize their block so that they can quickly get rid of tags when they pop up. Cleaning supplies are available through Espeland, Shun Tillman, or the City, and instructions on how to use them are available with the kit and on R.E.M.O.V.’s Facebook page. Sign up for the R.E.M.O.V. email at REMOV.AntiGraffiti@gmail.com.

One way to curb graffiti is through murals. Businesses on East Lake Street are invited to participate in a free mural project that the Longfellow Community Council is coordinating. For more information, please contact Andrew Johnson at grandeandy@gmail.com or Manola Suvannarad at suvannarad@gmail.com.

Report graffiti by calling 311, using the City’s online reporting tool, or by using the Minneapolis 311 iPhone and Android app.