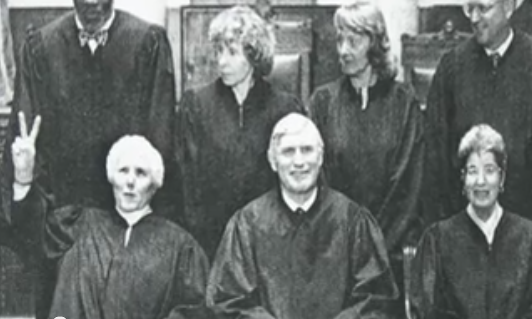 (Photo is screen shot from video below)

A few years after graduating from law school in Chicago, I moved back to rural Minnesota and set up a solo practice in the town where I grew up. That was 1977, the year that Governor Rudy Perpich appointed Rosalie Wahl as the first woman on the Minnesota Supreme Court.

Fighting my own battles in Litchfield, I was happy to hear about her appointment, but it seemed pretty far away. Rosalie saw it differently. I don’t know how she heard about me, but she contacted me and asked me to call and let her know when I would be in the Twin Cities. My calendar for 1978 has a notation of  “Justice Wahl” for noon on March 3. Her encouragement and support of a young and isolated woman lawyer were, I learned over the years, typical of her down-to-earth manner and her quiet follow-through on her convictions.

I left Litchfield later that year — doing battle with the judge in a one-judge town isn’t a great career strategy. I continued practicing law, in Chicago and Minnesota, until 1983. Rosalie Wahl continued as Justice Rosalie Wahl, and I learned more about her life as the years went on.

Rosalie Wahl grew up in rural Kansas and experienced loss and struggle early in life. In college, she founded an interracial housing cooperative. As a lawyer and as a justice, she remained committed to fairness and justice, and especially to fighting racial and gender bias in the legal system. The video biography below won the grand prize at the 2008 Minnesota Historical Society Greatest Generation film project.

I encountered Rosalie Wahl again in the mid-1980s, after I had left the practice of law. This time, we met at birthday parties at Peter Shea and Mary Ellen Shaw’s home.

Even before Ron and I talked marriage, Rosalie told Peter and Mary Ellen that she would be happy to perform our wedding. In 1988, we went to her office to talk about plans. She told us that she would wear her robes for the wedding, “because the older generation will think it’s more real that way.” On our wedding day, we waited with the guests, wondering where she was as the minutes ticked by. When she arrived, Rosalie explained that she had stopped by the side of the road to pick wildflowers for the vase that was her gift to us.

In 1994, Rosalie Wahl retired from the Supreme Court, leaving a legacy of solid achievement for all the women, and men, who would follow her. Her words, from the documentary above, are a gentle but forceful reminder:

For a more extensive account of the life and career of Rosalie Wahl, see this July 22 MPR report and this one from 2012 and this MinnPost article about her role in transforming legal education.