It was a combination history lesson, community celebration and family reunion: Friday’s ceremonies kicking off the 2013 Rondo Days festival and honoring the legacy of the St. Paul Red Caps — the vanished black baggage handlers who worked for low wages at the St. Paul Union Depot but who left a successful community behind as their monument.

Well-remembered and cherished in St. Paul’s African-American community, the Red Caps had nearly been forgotten by the city at large, just as their contributions were overlooked during their life times. Now, just as the formerly moribund rail depot is being revived to serve modern rail transportation, the Red Caps finally are being given the recognition they richly deserve.

It is a fitting honor, but a bit surprising to people familiar with the story of the Red Caps and familiar with it being ignored. When Subira Kifano walked into the newly named Red Cap Room Friday, entering the newly minted space overlooking the depot’s main concourse, she was shocked to see her father, A.B. Parker. He died in 1987, but a near-life-sized cutout of him was standing by a baggage cart in a historic display. Kifano, an assistant professor of education at Hamline University, stood next to the image of her father — a third-grade dropout and father of 11 who brought his family from Mississippi to St. Paul in 1941 in the hope of making a better life for his children. 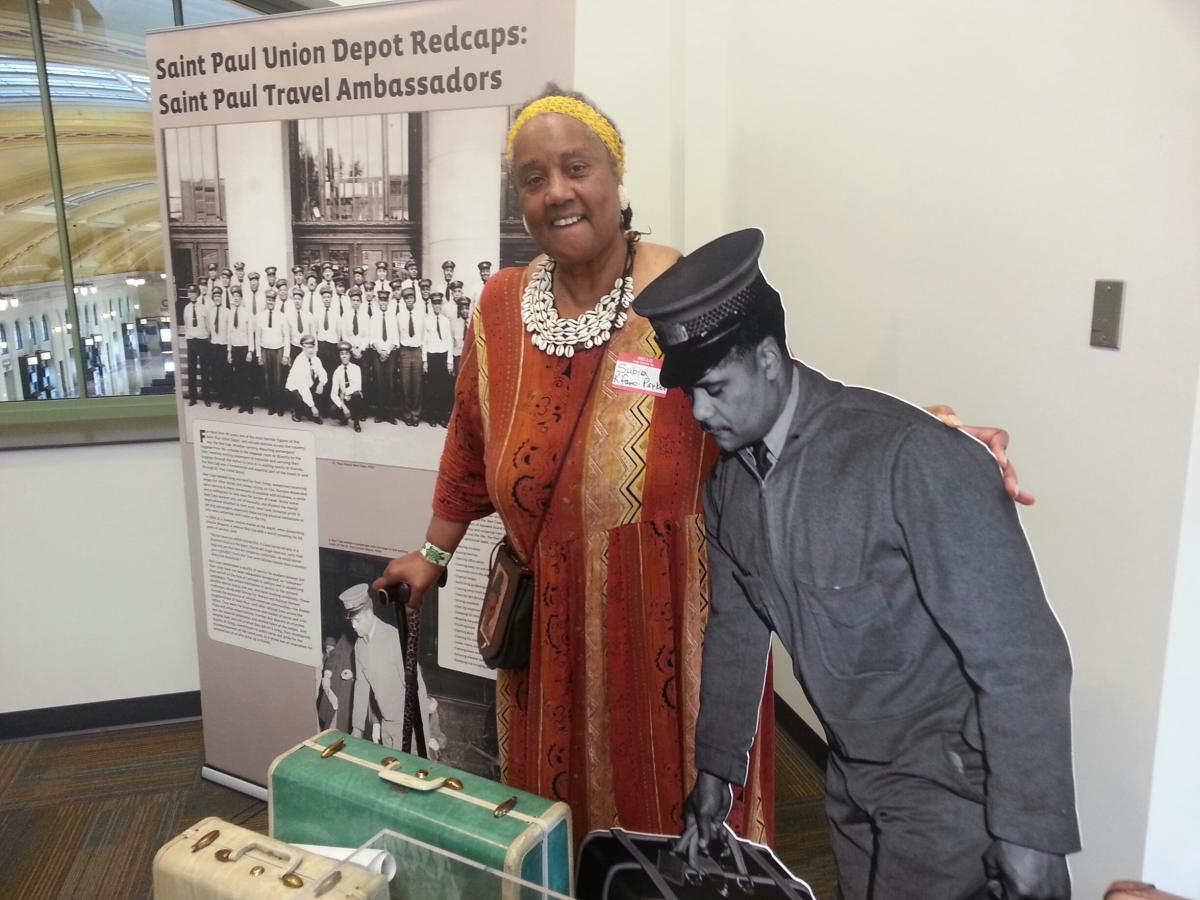 Sabira Aleathia Kifano, 63, poses with a cutout of her late father, A.B. Parker

“I’m ecstatic to see my father here,” she said, overcome with emotion.

Nearby, St. Paul firefighter Jerome Benner pointed to the 1952 portrait of the Red Caps standing on the steps of the Union Depot and singled out the smiling figure of his father, Cornelius “Bud” Benner: “Dad’s smiling because he knew I was on the way — I was born in December that year,” Benner joked. Benner is proud of the legacy his father managed to build despite his humble work and low wages. The monthly salary for Red Caps, it was pointed out, amounted only to $66 a month in 1945, the equivalent today of just $779, or a little over $9,000 a year.

“Can you imagine what your wife would say today if you came home with a job like that,” Marvin Roger Anderson, one of the co-founders of Rondo Days, joked Friday.

Despite that, the Red Caps held a respected position in Rondo and quickly joined the small black middle class in St. Paul.

“To serve people is an honor,” said Benner, who is 60. “As a firefighter, the greatest honor I can possibly earn is to come to the help of someone in need. That’s what my dad believed, and when I look at these men (in the photo of the Red Caps), I am so very proud he was a part of that. Christ came to serve, not to be served. To raise a family of seven on a minimum wage? We never went without anything I needed.”

The character of the Red Caps is evident in the who’s-who of African-American leaders they left behind in their home town. Friday’s ceremony, attended by about 300 people, was studded with well-known Rondo names: Carters and Finneys and Montgomeries — on and on. The old Rondo neighborhood may have forever been damaged by the ramrodding of Interstate 94 through the city’s historic black neighborhood, but it lives on in the contributions of its sons and daughters, many of whom are descended from Red Caps. 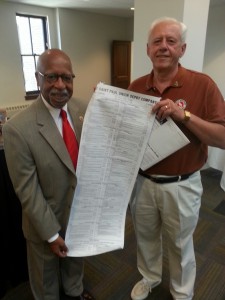 Left: Marvin Roger Anderson, co-founder of Rondo Days and railroad historian Gary Nelson look at a list of 300 trains that arrived daily at the St Paul Union Depot in the heyday of the Red Caps, with 20,000 people passing through the depot daily

“They created a strong black middle class in St. Paul,” said former Police Chief Bill Finney, whose grandfather was a Red Cap, and whose father worked as a waiter aboard the trains. “A lot of guys had college degrees but that was about the only job they could get. But they built up the black middle class and owned their own homes and ran businesses and all the rest. St.Paul wouldn’t be the St. Paul it is without them.”

Two of the last surviving Red Caps were on hand Friday, including Ruben Neal and James Melvin Young Sr., who is 87 now and blind, but whose family made sure he traveled from his Arizona home to St. Paul to remember the Red Caps and his 20 years of service at the depot.

“My wife and children are really proud of me and they really wanted me to be here,” he said. “Whatever it took, they were going to see that I got here. There were not many jobs for a black man in those days. You couldn’t even drive a cab.”

Starting in 1949, at age 23, and earning $9 a day plus tips, Mr. Young and his wife of 56 years, Lois, somehow built their own home and raised four children, including an accountant, a college recruiter, a contractor and a TV show host. Although the work was humble, the Red Caps built an enduring legacy. 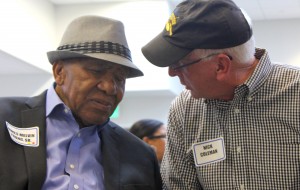 Right: The UpTake talks with one of the last surviving Red Caps, James Melvin Young Sr., 87

“These people were the founders of the village,” said former police officer and St. Paul City Council member Debbie Montgomery (she is running again this year for her old Ward 1 seat), whose grandfather was a Red Cap. “They created the leaders of the community today. We grew up on tips. And if the tips were good, we had meat for dinner!”

“These jobs were why my family moved from the South to St. Paul,” said Nieeta Presley, pointing out the photo of her grandfather, Stanley Tabor. “One of the only jobs they could get was a Red Cap, and it might not seem like much to many people. But to my family it meant the kids could go to college and buy homes.” 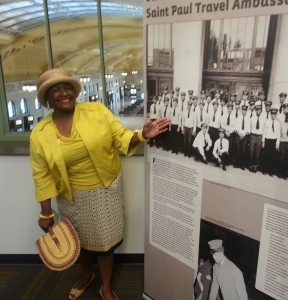 Despite all the accolades for the men of the gone-but-not-forgotten Red Caps, the founders of Rondo Days, the celebration which runs through July 21 and is observing its 30th anniversary this year, say the Red Caps still have not received all the honor they deserve.

Roger Marvin Anderson, who founded Rondo Days with Floyd Smaller, recounted Friday how retiring New York Yankees pitcher Mariano Rivera has been taking his “farewell tour” of baseball this summer by meeting with the ushers, the cooks and the other “little people” in each ball park to thank them. The Red Caps, Mr. Anderson said, were also mostly behind the scenes, working for little pay and less glory. But without them — and without their work on behalf of the 20,000 passengers who passed through the Depot each day during their time — St. Paul would have been a less thriving, and less friendly city. “They chose to name this room after the so-called little people,” instead of after some celebrity or politician, Anderson said. That was a good decision.

“The discrimination and the circumstances did not get in their way,” Anderson said, saluting the Red Caps. “They took what they had and brushed aside all the obstacles in their way and went forward and lived their lives. That’s what we saw, coming up in this community. They had a positive response to adversity.” 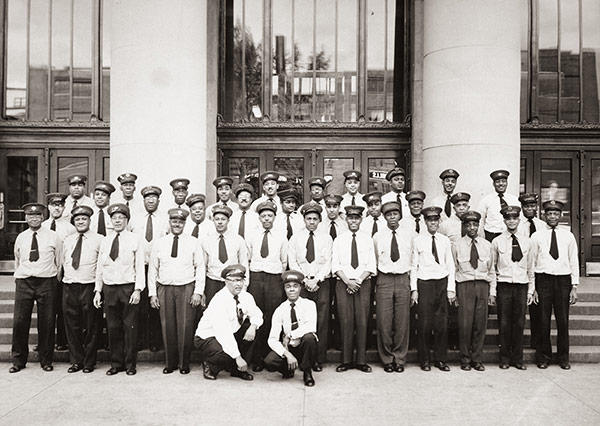