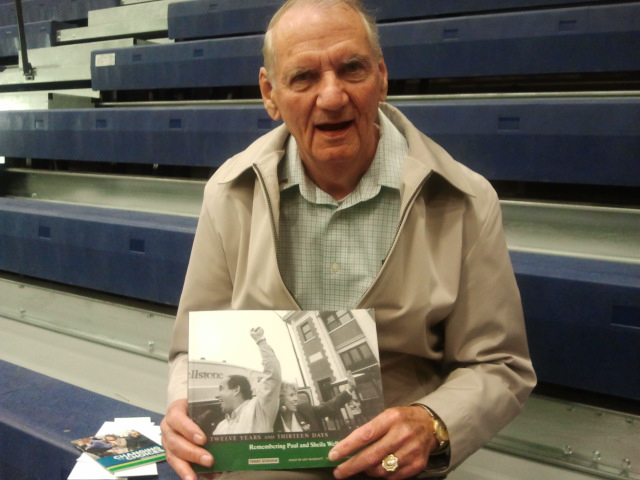 Paul Scott, former driver of the late Democratic Sen. Paul Wellstone of Minnesota was among several hundred people at Macalester College in St. Paul October 10 to commemorate the death of Wellstone, who was killed in a plane crash a decade ago this month at the age of 58.

The event was highlighted by Minnesota political heavyweights, including Gov. Mark Dayton, who spoke of the enthusiasm and honesty Wellstone brought to politics during his two terms — 1991 to 2002 — in the U.S. Senate. Dayton said that Wellstone would probably have run for president if he had lived.

“I personally believe, without any evidence, that he would’ve felt duty-bound to try,” Dayton said. “And I have no doubt that he would’ve been a far better presidential candidate in 2004 than the Democratic senator [John Kerry] who won the nomination and lost only narrowly to President Bush.”

The 80-year-old Scott, though, had more personal stories to tell about Wellstone when we talked after the event.

“I missed him terribly,” said Scott, who is now a driver for Transit Tec in St Cloud. “I’ve driven a bus for my entire life for different companies, but the funnest job I had was working with Paul Wellstone.”

On Friday morning, Oct. 25, 2002, Scott was gassing up the bus in preparation for a campaign swing in Duluth.

Wellstone, his wife Sheila, daughter Marcia and three campaign staffers boarded a small plane to participate in the funeral of a steelworker in Eveleth, Minn.

That Friday, Scott said, the plan was to meet Wellstone in Duluth after the funeral.

“Those days, we worked an average of about 20 hours a day,” Scott recalled. Wellstone was seeking a third term in the Senate, with a tight race against the Republican Norm Coleman — and the election was two weeks away.

Before Scott headed to Duluth that day, he heard the radio say that the plane had crashed and everyone died, including Wellstone.

“It’s very hard for an old man to cry, but I cried that day,” Scott said. “It was very tough not to. He was my best friend.”

A decade after Wellstone’s death, Scott can still tell dozens of Wellstone stories.

For Scott, one story shows why Paul Wellstone was special to him and to many others.

“After he was elected senator, he called my house and said, ‘How are you doing, Paul?’” said Scott. “Can you imagine a senator of the United States calling a bus driver?”

Students from Wellstone Elementary School of St. Paul also performed for the audience.

Wellstone Action will host a second event on Thursday, October 25 at 1 p.m. at the Wellstone Memorial and Historic Site in Eveleth, Minn.